The latest entry in A24’s evolving canon of European folk horror is “Lamb,” the feature directorial debut of Icelandic filmmaker Valdimar Jóhannsson. In the vein of “The Witch” and a more dour “Midsommar,” Jóhannsson brings a moody sensibility to this disturbing fairy tale about a pair of shepherds, Maria and Ingvar (Noomi Rapace and Hilmir Snær Guðnason), who make a startling discovery in their barn one day: a half-human, half-lamb hybrid child.

The film is a visual effects feat as the baby is performed partly by actual children, with the VFX-engineered head of a lamb and puppeteers working in tandem. IndieWire spoke to the filmmaker and Stockholm-based visual effects supervisor Fredrik Nord about bringing this strange creature to life.

The film, as even Johannsson would argue, is far closer to a drama than outright horror, and that comes from the director’s own cinematic DNA. Before working as a special effects technician on films like “Rogue One: A Star Wars Story” and as an electrician on Darren Aronofsky’s “Noah,” Jóhannsson studied filmmaking under Hungarian auteur Béla Tarr (“Satantango”). It’s a similarly austere, Eastern European aesthetic rigor Jóhannsson brings to “Lamb,” but with a special effects twist.

First, the story had to be sculpted courtesy of Icelandic poet, Oscar-nominated lyricist (“Dancer in the Dark”) and “The Northman” screenwriter Sjón, whom Jóhannsson said brought “mythical” elements of “folklore” to the film. Together, Jóhannsson and Sjón worked to keep the reveal of the lamb child a mystery (Ada, as she’s called, doesn’t appear until about a third of the way through the film), ultimately opting to show less of her in the final feature than in their initial drafts of the script.

“I had about 200 shots in my mind, but we had to cut it down to 70. It went even lower in the editing of the film,” said Jóhannsson. Originally, he imaged Ada as becoming increasingly verbal and testing her boundaries. But she is, after all, not the main character. 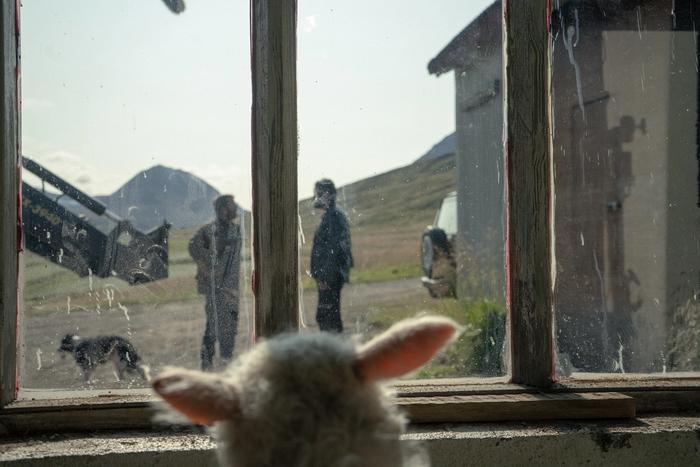 “This team did amazing things. When we were shooting, we started with puppets. Then we did the scene again with children. We worked with 10 children and four lambs. It was very time-consuming doing scenes that Ada was supposed to be in because we had to shoot so many elements,” Jóhannsson said.

In a given scene, the child actor would wear something best described as a green-screen swim cap (or, in other cases, more like a helmet, depending on the age of the actor), as in the finished movie, it’s mostly Ada’s lamb head we see on top of a small human body. In terms of casting the child stand-ins, Jóhannsson recruited children in ages ranging between six and 12 months and two to three years, with many children cast out of the Northern Iceland region where the film was shot.

As for the puppeteers, they’d find crafty places to hide. “For example, in the bedroom, they were under the crib,” Jóhannsson said.

“There were a lot of attempts to do puppets and real lamb composite shots, but it’s just a handful of shots. The majority, 90 or 100 shots or something, is CG,” said Fredrik Nord, who’s worked on films including “Her” and “Tinker Tailor Soldier Spy.” That’s partly because wrangling the children involved adhering not only to child labor laws — most can only work a handful of hours in the day — but also because of things like naptime and getting easily distracted.

“In the beginning, the idea was for [Ada] to speak slightly. She wasn’t supposed to be fluent or anything, but she was trying to be, with whatever a lamb can be, and later on it was an artistic decision to have her silent during the movie,” Nord said. “We had to do a lot with the eyes and nostrils to show if she was agitated or scared.”

Another key element of the film audiences might not notice at first, though it’s certainly one that lends to the overall sense of prickly ominous portent wafting through the movie, is that every scene takes place in the daytime. That’s because at this particular time of year (“Lamb” shot in summer 2019), Iceland only has about two short hours of darkness a day.

“My [director of photography] and I spent so much time on set, sometimes we just slept there, because we were fighting the most beautiful light. Some of the scenes we did after midnight because you have this magical light, so soft and beautiful,” Jóhannsson said. “I like that when they are going to bed, it’s usually bright outside. When you come home, you come to bed, it’s also bright outside. Sometimes it’s just like a dream because you are so tired, but it’s always bright outside. It can be very weird.”

Jóhannsson said that shooting the film at this time of year was by design, as he wanted to subvert the visual style of most horror movies, where it’s so dark you can’t see very much. “The [daylight] can be more scary, when everybody can see you, and you can almost see everything,” he said.

An A24 release, “Lamb” is now playing in theaters.

As new movies open in theaters during the COVID-19 pandemic, IndieWire will continue to review them whenever possible. We encourage readers to follow the safety precautions provided by CDC and health authorities. Additionally, our coverage will provide alternative viewing options whenever they are available.