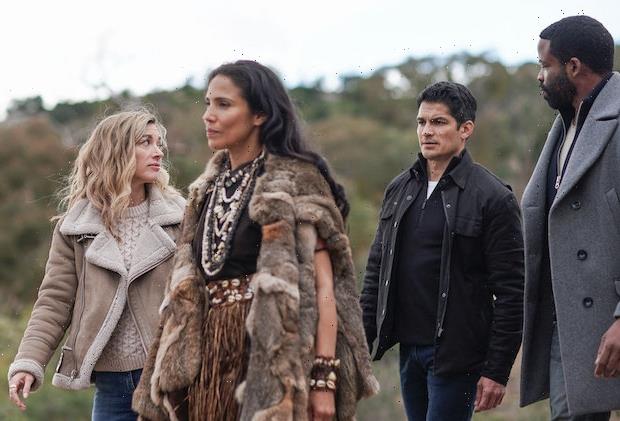 With production now underway on Season 2, again in Australia, NBC’s La Brea has confirmed the promotion of two actors to series regular status.

La Brea Season 2: Everything We Know

As reported by our sister site Deadline, both Tonantzin Carmelo and Michelle Vergara Moore have been upped to seres regular for Season 2, in the respective roles of Paara and Ella.

Paara (seen in photo above) is the tribe leader who was at first wary of the latest strangers to fall through the “light” into their primeval world and approach her people’s fort. But as Eve, Levi and the others — especially Ty (played by Chiké Okonkwo), who Paara grew to be rather sweet on — came to prove themselves, and as little Isaiah’s grandfather Silas evolved into the true adversary, Paara warmed up to and allied with the newcomers.

Ella, meanwhile, is the grown-up version of Lilly, the lass who “down under” at first faked being mute, to protect her sister Veronica. Tracked down in the present day by Gavin and Dr. Nathan, Ella produced the sinkhole map that Dr. Aldridge had trusted her with in 10,000 B.C. As the Season 1 finale came to a close, Ella, Gavin and Izzy took a leap of faith into a small Seattle sinkhole, landing on a beach in 10,000 B.C., where a wooly mammoth sauntered by.

Renewed back in November, La Brea for its second season will produce a total of 14 episodes, a sharp increase from its 10-episode freshman run. The “catch” is that due to the extensive post-production needed on the visual effects-heavy drama, Season 2 likely will be split into two batches, so that this TV season’s top-rated freshman series can still return in the fall.

Want scoop on La Brea, or for any other show? Email [email protected] and your question may be answered via Matt’s Inside Line.