A new, longer trailer for ‘Halloween Kills’ has finally arrived, but it’s not Michael Myers who fans are talking about. It’s ‘RHOBH’ star Kyle Richards and her ferocious bangs!

We already knew that Real Housewives of Beverly Hills star Kyle Richards, 51, would reprise her role as Lindsey Wallace — a role she originated in the original 1978 film — in the new Halloween sequel, titled Halloween Kills, but we had no idea she’d look so fierce while playing hide-and-seek with Michael Myers in the middle of the night. But that’s not all — just moments after Blumhouse released the new, extended teaser trailer for the movie on Oct. 29, fans couldn’t stop talking about Kyle and her blunt bangs! 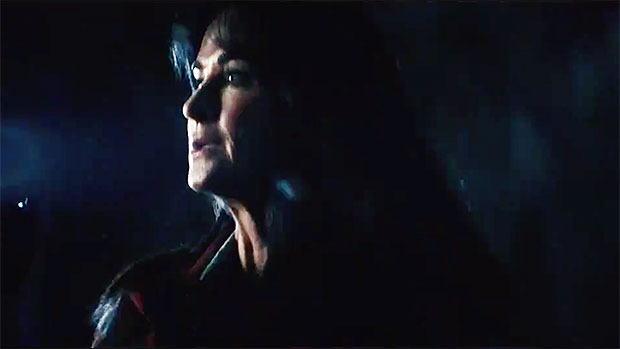 Kyle previously revealed that she cut her bangs for her role in the movie, and some even got a glimpse of them during Season 10 of RHOBH, but that didn’t stop people from fixating on them after watching the new trailer. “Every gay man pointing out Kyle Richards(‘ bangs) in the HALLOWEEN KILLS trailer,” on Twitter user wrote with an image of Leonardo DiCaprio pointing. And another said, “So the teaser for HALLOWEEN KILLS has been released and I saw Kyle’s bangs TWICE!”

Clearly, many fans are excited. But not for Michael Myers or the return of Laurie Strode (Jamie Lee Curtis). Instead, they’re hyped for Kyle and her forthcoming showdown with the big man with the white mask. And can you blame them?

When it was first revealed in Aug. 2019 that Kyle would be reprising her role as Lindsey in the new Halloween movie, fans went wild. And when the the movie’s release date was pushed back from 2020 to 2021 due to the ongoing COVID-19 pandemic, the anticipation for the movie, as well as her appearance in it, only grew. To get a glimpse at what’s to come, check out the full teaser trailer above.

And if you’re looking for more — Halloween Kills will be released in theaters on Oct. 15, 2021.

The Family Chantel has entertained viewers with seasons’ worth of drama. Chantel Everett and Pedro Jimeno became the stars of...

Mackenzie Foy looked back on the ‘unique’ experience she had while filming ‘Twilight’ when she was barely 10 years old,...