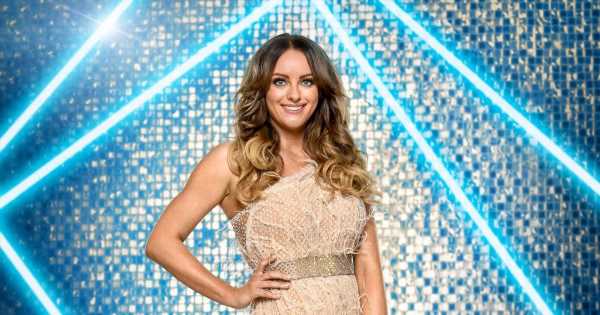 Coronation Street star Katie McGlynn has admitted hard-hitting roles like Sinead Tinker on the cobbles were 'draining' as she prepares to head into the glamorous world of Strictly Come Dancing.

Katie was embroiled in a tragic storyline when her Corrie character Sinead was diagnosed with cervical cancer – and later died shortly after giving birth to her son, Bertie.

The actress then went on to star in rival Channel 4 soap Hollyoaks as Becky Quentin – whose sinister motives as an anti-vaxxer rocked Diane Hutchinson's life.

Now Katie is looking forward to something a "bit more uplifting" in the Strictly ballroom.

Speaking to Daily Star and other publications, Katie admitted: "I love doing challenging storylines. That's what I do in my normal day-to-day work – I like playing other people, but when it's very serious it can drain you.

"I am normally a positive, fun person – I always find the funny side of the most tragic events. I always try and see the positive side and laugh at stuff instead of getting upset about it."

Katie added: "So Strictly is my cup of tea all over. I want to smile, I want to laugh, I want to dance and just have a good time – and hopefully make some lifelong friends along the way, which I'm sure I will do!"

Though Katie admitted she wasn't up for a 'battle of the soaps' with competitors like Nina Wadia and Rose Ayling-Ellis, she did receive plenty of advice from her former soap co-stars who had done the show before.

Catherine Tyldesley, best known for playing Eva Price on the cobbles, was the first to chip in with support for Katie.

"My friend Catherine Tyldesley did it a couple of years ago. She gave me the sound advice of just enjoy every minute of it because you'll have the best time!" Katie gushed.

And Emmerdale's Lisa Riley, who currently plays Mandy Dingle in the Dales, also had some sage words for Katie.

"I messaged Lisa Riley when I knew," Katie confessed. "I was very cautious about what I was texting her, but she kind of knew straight away. She was like, 'You're doing Strictly, aren't you?!'

"She said the same thing – just relax, enjoy it and be yourself.

"Lisa was just incredible when she did the box splits!" Katie giggled.

The star added: "I'm daft as a brush and it's a fun, relaxed show and that's my personality – so hopefully my dance moves will be okay!"

Despite her eagerness to give it a go, Katie still rates herself as the "underdog" of the competition.

She said: "I'll be honest, I am going to be the underdog because I don't know what I'm doing – but I hope I can actually learn and it'll be a nice, positive journey and I hope I get to learn how to dance!"

And asked if she'll be able to don a 'sexy' persona for dances like the rumba, Katie laughed: "I'm just not a sexy person, I'm really awkward! I'm hoping on the day I do those dances I'm just gonna have to morph into a different character, because I'm quite an awkward person – so it's going to be interesting!"

Strictly Come Dancing begins on Saturday, September 18 on BBC One.