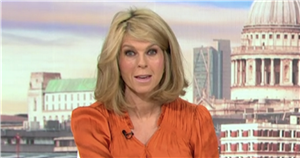 Kate Garraway has claimed that her Good Morning Britain co-star Susanna Reid was "attacked" over Piers Morgan's comments on the ITV breakfast show.

The 54-year-old presenter was back on our screens on Thursday morning alongside co-host Ben Shephard.

Conversation turned to the negative reaction Coleen has been hit with for sticking with Wayne despite the cheating allegations surrounding her footballer husband.

Kate said: ""It was interesting how [Wayne] had picked up on something that I think we've all picked on which is when he's had indiscretions, made mistakes, obviously he's been criticised for it but she is as well in a kind of, 'Why are you forgiving him? Why are you keeping him under control?' It's interesting how women often get accused of it.

"It reminds me a little bit of when Piers Morgan was here, they'd be cross with something Piers had said, but then also attack Susanna for not keeping him in check!"

The explosive TV moment brought his time on the show to an end after six years.

ITV announced the decision after Ofcom said it was investigating his comments after receiving 41,000 complaints.

Piers said he "didn't believe a word" the Duchess of Sussex had told Oprah Winfrey about her mental health in an interview.

An ITV spokesperson said at the time: "Following discussions with ITV, Piers Morgan has decided now is the time to leave Good Morning Britain. ITV has accepted this decision and has nothing further to add."

Piers' departure followed an on-air clash with weather presenter Alex Beresford, who criticised his colleagu for "continuing to trash" the duchess, prompting the presenter to walk off set. He returned within 10 minutes.

A total of 41,015 complaints were made to media watchdog Ofcom.

It's the second highest number of complaints in Ofcom's 17-year history, behind the 44,500 submitted over several days about the racism row involving Jade Goody and Shilpa Shetty on Celebrity Big Brother in 2007.

Piers has since revealed his next presenting job will be for new television channel talkTV – which is being set up by Rupert Murdoch's News Corp.

The company, which will launch its new service next year, said Morgan's nightly show will be broadcast in the UK, the US and Australia.

Talking about his new role, Morgan said: "I'm thrilled to be returning to News Corp, which is where I began my media career more than 30 years ago.

"I want my global show to be a fearless forum for lively debate and agenda-setting interviews, and a place that celebrates the right of everyone to have an opinion, and for those opinions to be vigorously examined and challenged."

Good Morning Britain airs weekdays on ITV at 6am