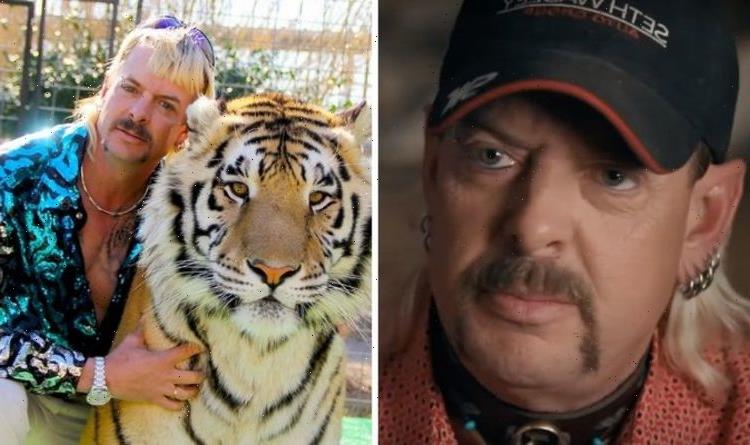 Joe Exotic is the enigmatic star of Tiger King, the larger-than-life Netflix documentary which charted his life and business in the world of big cat ownership. The first series ended with Exotic’s arrest and his business being taken over by fellow cat lover Carole Baskin. But the story didn’t end there, with season two premiering on the streaming platform on November 17.

Where is Joe Exotic now?

When viewers first tuned into Tiger King, most expected a simple story of a man and his zoo.

Instead, what developed was a season of scandal, rivalries, and even hitmen-for-hire.

In the first season, Exotic tried his hand at many talents, from lion wrangling to presidential campaigning; it was a season of the unexpected.

Following the release of the first season, Exotic’s journey continued to be just that, with the star pleading for a reduced sentence while still in prison.

The star is currently serving a 22-year sentence for his involvement in a murder-for-hire plot and animal abuse.

Exotic has been keeping busy while he has been in prison, wasting no time in writing a tell-all memoir which is due for release on November 23 – Tiger King: The Official Tell-All Memoir.

He has also been relentlessly working alongside his lawyer to be re-sentenced.

Sadly, Exotic recently announced he has been diagnosed with cancer on November 4.

Posting the news on Twitter, Exotic wrote: “Doctors called me in today to break the news that my prostate biopsy came back with an aggressive cancer, Carole Will have her own party over this!

“Say a prayer everyone & be my voice love #joeexotic.”

Regarding his sentencing, Exotic also wrote on Twitter: “They have the proof I did not do this and there is no reason for the U.S. attorney to drag this out.”

Exotic is now asking to be released to seek treatment following his diagnosis.

As for Tiger King Park, the zoo officially closed down in August 2020, with the grounds now owned by Carole Baskin.

Much of Baskin’s journey with the zoo has been catalogued in Tiger King season two, along with her new show.

The show also sees her recount the events of Tiger King season one from her perspective.

As for season two, Exotic takes a backseat this season due to his incarceration.

However, he does still contribute through several phone calls from inside his cell.

Netflix has not confirmed if the docuseries will receive a third season.

Tiger King seasons 1-2 are available to watch exclusively on Netflix.