Jeopardy! host Alex Trebek has died at age 80 after batting pancreatic cancer for more than a year. He is survived by his wife Jean and their two children, Matthew and Emily. 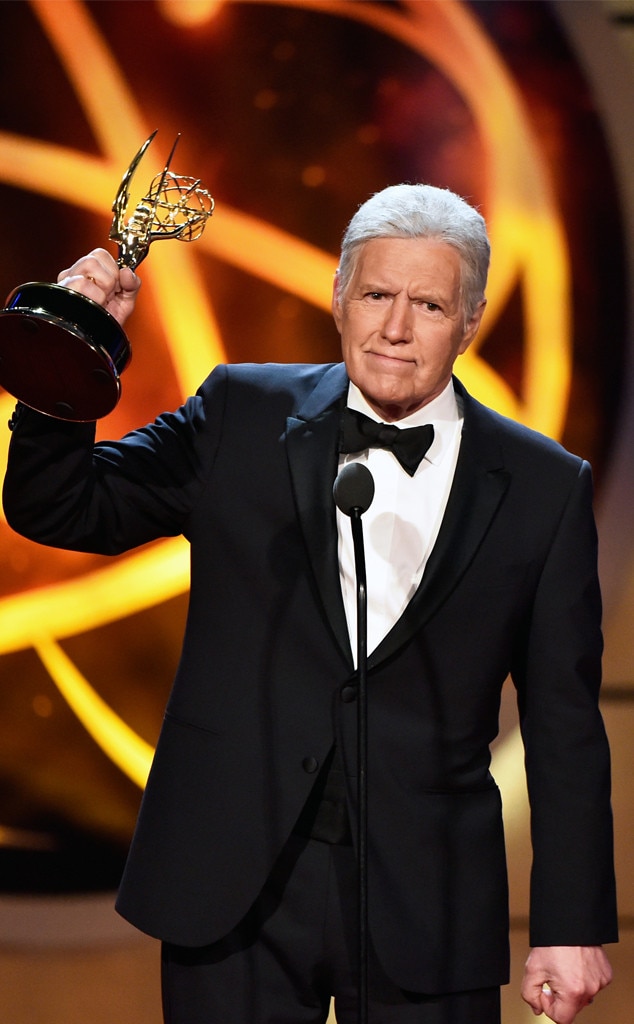 Hollywood has lost one of its greats.

Jeopardy! host Alex Trebek passed away at the age of 80 on Sunday, Nov. 8, after battling pancreatic cancer for more than a year. The news was announced on the game show's Twitter page on Sunday, Nov. 8. The post read, "Jeopardy! is saddened to share that Alex Trebek passed away peacefully at home early this morning, surrounded by family and friends. Thank you, Alex."

Producers said in a statement to E! News that Trebek's last day in the studio was on Oct. 29, a little more than a week before he died, and that Jeopardy! episodes he hosted will air through Dec. 25. The statement added, "The show is not announcing plans for a new host at this time."

Executive Producer Mike Richards said in a statement, "This is an enormous loss for the Jeopardy! staff, crew and all of Alex's millions of fans. He was a legend of the industry that we were all lucky to watch night after night for 37 years. Working beside him for the past year and a half as he heroically continued to host JEOPARDY! was an incredible honor. His belief in the importance of the show and his willingness to push himself to perform at the highest level was the most inspiring demonstration of courage I have ever seen. His constant desire to learn, his kindness, and his professionalism will be with all of us forever."

In March 2019, Trebek announced that he had been diagnosed with stage 4 pancreatic cancer, which has a survival rate of 1.6 percent. However, the devastating prognosis didn't dampen his spirit.

"I'm gonna fight this," he said stoically. "I'm gonna keep working, and with the love and support of my family and friends and with the help of your prayers also."

At the time, the star vowed to continue hosting the show for as long as he could. He joked, "Truth told, I have to. Because under the terms of my contract I have to host Jeopardy! three more years!"

Rapper and Influencer Brax Dead at 21

The following August, he said he had completed treatment. But the following month, he revealed that his health had taken a turn.

"I was doing so well and my numbers went down to the equivalent of a normal human being who does not have pancreatic cancer, so we were all very optimistic," he said on Good Morning America. "I lost about 12 pounds in a week and my numbers went sky high, much higher than they were when I was first diagnosed. So the doctors have decided that I have to undergo chemo again and that's what I'm doing."

During the interview, he opened up about death and being prepared to say goodbye when his time came.

"I realize there is an end in sight for me, just as there is for everyone else," the beloved TV personality said. "One line that I have used with our staff in recent weeks and months is that when I do pass on, one thing they will not say at my funeral is, 'Oh, he was taken from us too soon.'"

"I've had one helluva good life and I've enjoyed it," Trebek continued. "The thought of passing on doesn't frighten me. It doesn't. Other things do. The effect it will have on my loved ones. Yes, that bothers me. It makes me sad. The thought of myself moving on, hey folks, it comes with the territory."

Earlier in 2019, Trebek discovered he had a subdural hematoma that required him to go under the knife. "Some of you may have heard by now that during the holiday break, I had a slight medical problem," he shared in a January 2019 video. "Surgery was performed. After two days in the hospital, I came home to start recovery."

The brain surgery caused a slight delay in production, but before long Trebek was back on set doing what he loved.

This past March, Trebek gave a one-year update about his health in a video posted on Twitter. He said, "Now I'd be lying if I said the journey had been an easy one. There were some good days, but a lot of not-so-good days. I joked with friends that the cancer won't kill me, the chemo treatments will. There were moments of great pain, days when certain bodily functions no longer functioned, and sudden, massive attacks of great depression that made me wonder if it really was worth fighting on"

Trebek's passion and drive to deliver an intellectually stimulating show began in 1978, when he was in his early 40s. He had just come off a job as a newscaster for the Canadian Broadcasting Corp. and was about to find out he had a knack for game shows. Since then, Trebek has hosted nearly 8,000 episodes of Jeopardy!, which has earned him numerous awards, including several Daytime Emmys.

Trebek is survived by his wife of 30 years, Jean Trebek, and children Matthew and Emily. Jeopardy! producers said in their statement that the family has announced no plans for a service, but gifts in Alex's memory could go to the humanitarian organization World Vision.

In a January 2019 interview, the TV personality shared that he has no regrets, except for one: that he didn't get to spend more time with his wife.

"My wife Jean and I have been together almost 29 years, and I was thinking about President Bush when he died, and all the comments about his life about what a nice guy he is, and how he and his wife had been together 73 years, he told People after his cancer diagnosis. "I thought, 'Oh my gosh…if I'd just met Jean in my 20s we could have had a longer life together.'"