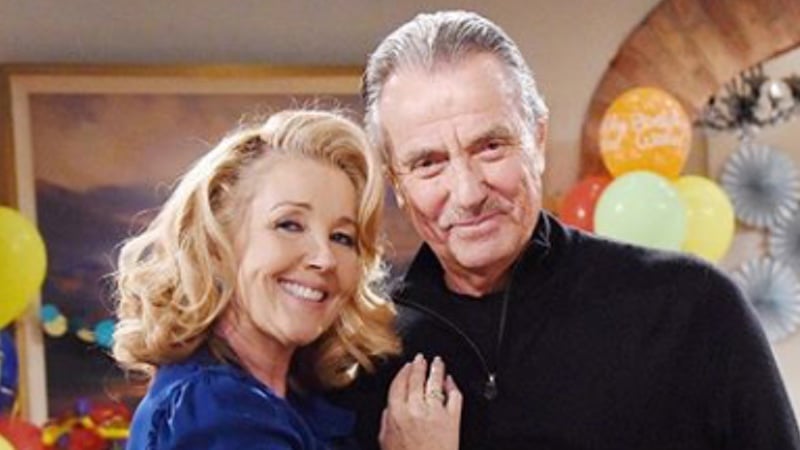 Eric Braeden has announced his long-awaited return date to The Young and the Restless, but dropped a distressing bombshell as well! What has fans in an uproar?

The mega titan with the monstrous mustache returns to TV screens December 21. But in what state? Could it be that the great Victor Newman is a mere shell of his former self-righteous self?

Y&R posted a photo of Braeden and onscreen wife Melody Thomas Scott (Nikki) on Instagram stating that he’s coming back, which was followed up by Braeden tweeting a screenshot, indicating he’s back onscreen Friday, December 21.

As Y&R fans know Braeden took September off to visit his native Germany where he had a 60th reunion with the winning German Youth Championship of which he was a part of. Braeden was the discus, javelin, and shot put champion.

At the time fans were frantic that his absence signaled a permanent departure from the CBS sudser. Apparently not!

But Braeden did drop a surprise bombshell on fans, confirming that Victor’s Newman ranch house is a goner. Of course, fans found out today that the pile was up in flames when Nikki got a chilling call imparting the bad news.

Some fans had grown attached to the cozy sets, but Braeden assured viewers that even better scenery is in the works.

With the ranch house in flames, where is Victor? He was last in Dubai, and now Nikki is frantic because he seems to have dropped off the planet without a trace.

Could he actually be in the ranch house rubble, struggling to put out the flames, or even worse, knocked unconscious? We’re about to find out sooner rather than later, as Rey (Jordi Vilasuso) has his squad scouring the grounds for the arsonist he says set the fire! Do you think Victor is behind this latest nefarious Newman stunt?

The Young and the Restless airs weekdays during the day on CBS and on PopTV in the evening.