Insulate Britain guest Liam Norton stormed out of the Good Morning Britain studio this morning after clashing with Susanna Reid and Richard Madeley over activists blocking the M25.

The interview immediately got off to a shaky start when Susanna politely asked the campaigner to stop patronising her over the motorway protests.

‘You’re an intelligent journalist,’ he said. ‘And you haven’t understood what I said last week about what we do in the next three to four years will determine the future of humanity.’

Susanna retorted: ‘Liam, try not to be so patronising when you’re talking to me.’

Things went from bad to worse though when Richard stepped in to say that blocking the motorways puts the lives of others at risk, referring to the mum who was left partially paralysed from a stroke as she was unable to get to hospital quickly.

‘You’re not accepting the responsibility of your actions,’ Richard slammed, with Liam attempting to interrupt. 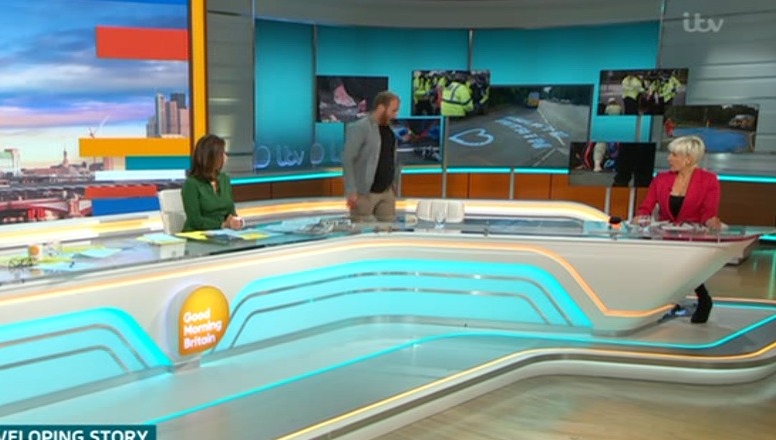 ‘Well, if you say something stupid, I’ll cut you off,’ Richard hit out. ‘The way you’re putting your argument is fatal, it has fatal consequences.’

Liam then launched into an almighty rant and got increasingly irate.

Standing up from his chair, he yelled: ‘I’ve had enough of talking to people in this country about what we’re doing. This is the state of things.’

The Government is today seeking an injunction against the environmental group after it shut down the M25 five times in just over a week.

Police have warned protesters who targeted the M25 five times in just over a week that their tactics are likely to cause ‘serious injury or death’.