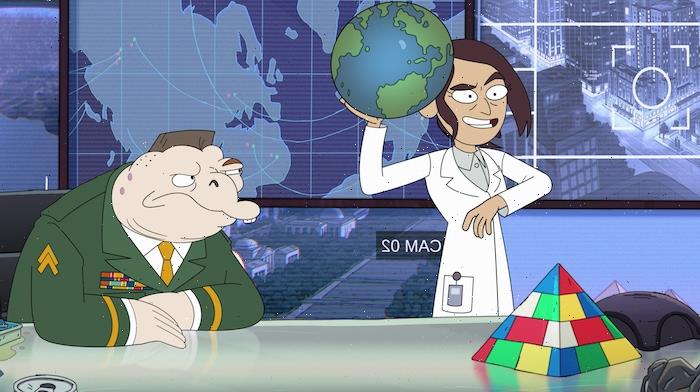 Netflix’s latest foray into adult animation is the series Inside Job, a show that takes all those wacky conspiracy theories festering on the internet and pretends an inept secret organization is behind them all.

We now have a first look at what this comedic animated series looks like. Read on to see the images and find out who’s behind it all (AKA, the voice cast).

First Look Images of Inside Job

The show focuses on an organization appropriately called Deep State. Who are the masterminds behind this nefarious, conspiracy-causing organization? The images suggest it looks like Deep State doesn’t include the best and the brightest. It does, however, seem full of ne’er-do-wells who control the weather and wear killer mech suits. The organization also appears to employ non-humans and floating heads along with regular anti-social folks.

Here is Netflix’s official synopsis of the show:

Inside Job is an adult animated comedy about the shadow government– and the dysfunctional team whose daily grind is committing the world’s conspiracies. From convoluted coverups to secret societies to masked orgy etiquette, navigating office culture at Cognito Inc. can be tricky, especially for anti-social tech genius Reagan Ridley. Even in a workplace filled with reptilian shapeshifters and psychic mushrooms, she’s seen as the odd one out for believing the world could be a better place. Reagan thinks she can make a difference, if only she could manage her unhinged, manifesto-writing father, her irresponsible coworkers, and finally snag the promotion she’s been dreaming about.

Inside Job’s Voice Cast Is Behind It All

What conspiracy theories does the series take on? Do I need to wear a tinfoil hat while watching the show? These questions and more might be answered once Inside Job premieres on Netflix on October 22, 2021.