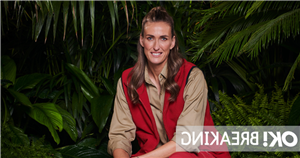 Jill Scott is transformed into Truly Scrumptious for today's Critty Critty Fang Fang Bushtucker Trial on I'm A Celebrity… Get Me Out Of Here!

The Bushtucker Trial, which is inspired by hit movie Chitty Chitty Bang Bang, sees the England Lioness, 35, in a vintage car suspended in the air.

Jill then has to climb out of the vehicle, which is on a zip line, to retrieve stars for her and her campmates.

In the teaser clip, an overwhelmed Jill says: "Oh my God, oh my God!" as she attempts to get herself on a platform next to the car.

The clip ends with the footballer appearing to grab the star as hosts Ant and Dec say: "Take your time, take your time!", adding: "Don't drop it!"

It comes as Ant and Dec admitted they are "gutted" over Boy George's exit.

The Culture Club singer, 61, was announced as the celebrity with the fewest votes during Tuesday’s show.

As a result of the news, Boy George gave his new friends a hug and went to speak to Ant and Dec about his time in the jungle.

Taking part in an Instagram live video after the show, hosts Ant and Dec jokingly blasted viewers for getting rid of Boy George.

Show co-host Ant McPartlin said: "What a goddamn shame, I really enjoyed Boy George in there, I loved him. I thought he was really good fun.

"It is easy to say he stirs things up but at least he does stuff down there. He is a bit controversial but at least he had a word about people and he made me laugh. No one is on my wavelength."