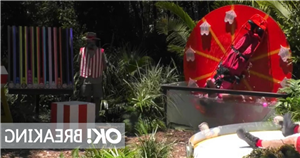 I'm A Celebrity… Get Me Out Of Here! looks set for entertaining scenes on Thursday night as Jill Scott, Mike Tindall and Owen Warner are nominated for a Bushtucker Trial.

In a new teaser clip released by ITV, it sees Jill, Mike and Owen picked by their campmates to take on the Scareground.

During the clip, it sees Hollyoaks star Owen attached to a rotating board which dunks his head in water.

At the same time, Mike is spun around on a rotating floor circle as he has to throw balls into the water tank for Owen to retrieve.

Elsewhere, England Lioness Jill is trapped in a cage as that too is rotated as she is seen screaming.

In the clip, the trio are supported by their campmates as they cheer them on while Ant and Dec have to instruct Owen on what to do.

However, he is not fazed during the Trial as he jokes about being dunked in water: "This is actually quite relaxing!"

But the same can't be said for Jill as the clip ends with the football legend screaming inside a cage.

It comes as Ant and Dec have admitted they are baffled by Charlene White's bed issues in camp and have vowed to report her to producers for potentially breaking the rules.

Loose Women star Charlene, 42, was chosen as deputy camp leader by Matt Hancock, which assigned her a comfy bed alongside him in the RV, but she has refused to sleep there and become emotional about the prospect.

However, her decision to remain outside in the main camp has meant Seann Walsh has slept in a hammock and now has back pain.

Taking to Instagram Live after the show aired, Dec said: "Can we talk about the hammock RV situation? Do you get it? I don't."

To which Ant said: "Why would she not want to sleep in there, it can't just be because of the spider. Is it because you don't want to sleep next to Matt? Is that it?

"You've got to think of the other people that have to then sleep in a hammock because of your actions and then have a bad back. Then you've got to look at your actions, don't you?"

Dec said: "I am not sure it is playing as a team member taking up a bed."

And when one fan suggested it was against the rules of the trial, Ant agreed.

The presenter said: "It is against the rules they said… well yeah, maybe. I think maybe she is and I am going to speak to the producers about it."