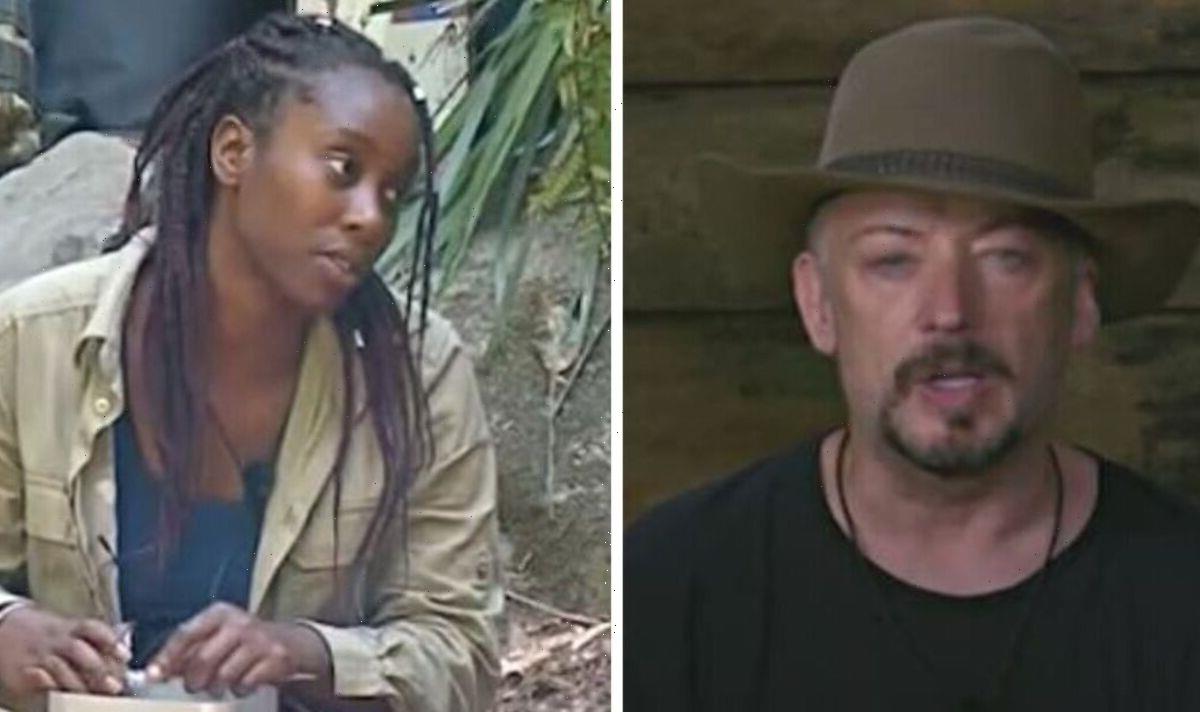 I'm A Celeb: Boy George struggling to warm to Hancock

However, Wednesday’s episode of I’m A Celebrity… Get Me Out Of Here! saw fans fuming over singer Boy Geroge, who they deemed “hypocritical”. Previous episodes have seen baffled contestants grilling Matt about his conduct during the Covid-19 pandemic, which saw him resign after he broke his own lockdown rules. Boy George wasn’t pleased when he was questioned about his prison stint though, and after making his feelings clear he quickly turned the conversation back to the MP, asking him to answer “uncomfortable” questions.

A Place in the Sun presenter Scarlette Douglas put the 80s icon on the spot during Wednesday’s instalment of the ITV reality series.

She publicly questioned him about his 2009 imprisonment, which came about after he was convicted of assault and false imprisonment of a male escort.

He’d been sentenced to 15 months but was released after serving only four months due to good behaviour.

George appeared taken aback and became defensive, later admitting he found it “inappropriate” for Scarlette to have brought it up.

The 35-year-old had probed George on the incident, asking what had happened “with you and some guy in handcuffs and a radiator”.

“That’s not true,” the singer replied. “Handcuffs is true but the radiator bit wasn’t true, but thanks for bringing it up.”

After explaining he didn’t think he’d still have a career if the reports had been true, he later criticised Scarlette for her drawing attention to the controversy.

Chatting in the Bush Telegraph, he fumed: “Scarlette blatantly talked about my court case.

“I thought it was inappropriate what she did, actually. I thought she shouldn’t have said what she said to me.

“And I thought I handled it really well as it’s a big sore point for me when people say things like that.”

Starting a political discussion with Matt later, he complained when the politician refused to answer certain questions.

Viewers rushed to social media to rage over the 61-year-old’s “hypocrisy”.

Twitter user @glove_island wrote: “Me clocking Boy George’s double standards when being held accountable for his own abhorrent actions.”

@roseeeee80 penned: “In all seriousness Boy George taking 0 accountability and turning it around on Scarlett by saying she was inappropriate for bringing it up just proves he’s a big ass narcissist and I want him gone #ImACeleb.”

“BOY GEORGE IS SUCH A HYPOCRITE #ImACeleb,” @lukadapoochie fumed.

@Hamperings remarked: “So people can ask Matt Hancock anything but when it’s Boy George then you can’t ask him anything. What a baby. #ImACeleb.”

I’m A Celebrity… Get Me Out Of Here! continues on Thursday at 9pm on ITV.