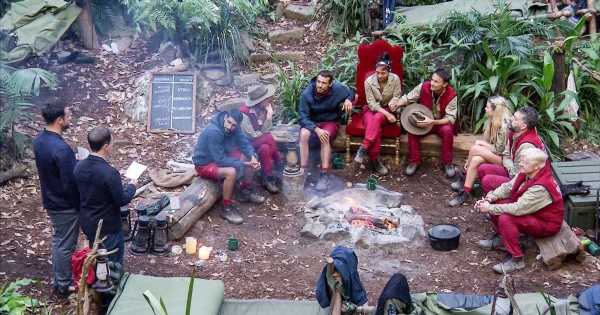 I'm a Celebrity… Get Me Out of Here! has been thrown into turmoil as the camp was hit with extreme weather over the weekend.

The hit ITV show is set to return to screens in a matter of weeks, with the first episode of the new series airing on Sunday, November 6 and back in Australia for the first time in two years.

But worry has already been cast over this year's series after a month's worth of rain fell into the camp, meaning it could become a mudbath following the blistering storm.

READ MORE: I'm a Celebrity start date 'confirmed' – and fans only have to wait few days

There are now fears the show could be forced to evacuate celebrities if a similar downpour was to hit during filming.

The closest small town to the jungle camp site, Murwillumbah, was also virtually underwater in March with dozens of homes evacuated and any more heavy rain in the next few weeks would pose problems for the town and the show being filmed.

One TV source said: "The ground will be getting more and more saturated by the heavy rain and so we could do with some sunshine – that the show is famous for Down Under – to kickstart the series and avoid any setbacks.

"The outlook for the next few days is looking better, but the weather can change quickly here, as we have seen in the past."

The Aussie camp was evacuated in 2015 as thunder, lightning and torrential rain poured into the jungle.

The bad weather also meant cameras and lighting used on the show have lost power for a few hours. Celebs took shelter in the Bush Telegraph before returning to camp later.

When the show was filmed in Gwrych Castle in North Wales last year, the celebs were forced to completely leave the area and stay in nearby guest houses when the weather played havoc with the set.

The roof was taken off a building used for editing the programme and the show had to make do with highlights and pre-recorded bits from Ant and Dec before it went off air, with the celebs returning back into camp after the weekend when things were repaired to complete the series.

The show is set to return one week earlier than normal to avoid clashing too much with the football World Cup which starts on November 21.

After two years in Wales bosses are excited to return to Australia and believe it could be a ratings winner.

They have pulled out all the stops for an all star line up which is thought to include Boy George, Mike Tindall and Chris Moyles.