Hugh Grant resisted television, and it took “A Very English Scandal” director Stephen Frears and writer Russell T. Davies to convince him to make the leap. It was his first TV project since the early 1990s — and it just earned him a Golden Globe nomination for Best Performance by an Actor in a Limited Series or a Motion Picture Made for Television, and one from SAG for TV Movie or Miniseries — Male Actor.

“I was the last of the snobs about television,” Grant recently told IndieWire’s TURN IT ON podcast. “People tell me that everyone else has gone back to television, or what they call television. But it’s not really telly, is it? It’s streaming, really. I’ve only recently worked out how to use this stuff. My 7-year-old daughter teaches me how to use Netflix.”

Grant said he sees the streaming world as a TV/film hybrid, and is now “OK with it.” Mostly, he couldn’t resist the lure of playing notorious U.K. politician Jeremy Thrope.

“I’m always terrified to do any job and I find 16 ways not to do them,” he said. “But it was very hard to find a good reason not to do this because I did remember the story and I loved the story and the tone, when you can have drama and comedy co-existing, walking the tightrope of tone here. I couldn’t wiggle out of it.”

I recently moderated a panel with Grant about the series, what brought him back to TV, how he keeps working with Ben Whishaw in a variety of ways, and why “A Very English Scandal” felt so current this year, especially during the recent Supreme Court/Brett Kavanaugh confirmation hearings. A warning, the audio isn’t great, but the conversation is. Listen below.

In the late 1960s, Jeremy Thorpe (Grant) was the leader of the Liberal party and the youngest leader of any British political party in 100 years. But he was also a closeted gay man in a time when homosexuality had just been decriminalized, and it was a secret no politician could reveal. When his former love, Norman Scott (Whishaw) threatens to reveal their relationship, Thorpe’s career is at risk — and he tries to silence him. What’s amazing is this is all true.

“We all loved it when it was happening, it was like ‘Monty Python,’” Grant said. “I was in my late teens, and the whole country was loving it. There were these people in three-piece suits, very establishment, plotting murders and talking about biting the pillow! The jokes were incredible.”

And as the title suggests, the farcical nature of this scandal was also very English. “If you imagine a Russian plotting a murder it would probably go quite well,” he said. “Or a Saudi. Or an American. The Mafia do a good job. But [here] it’s English because it’s such a failure!” 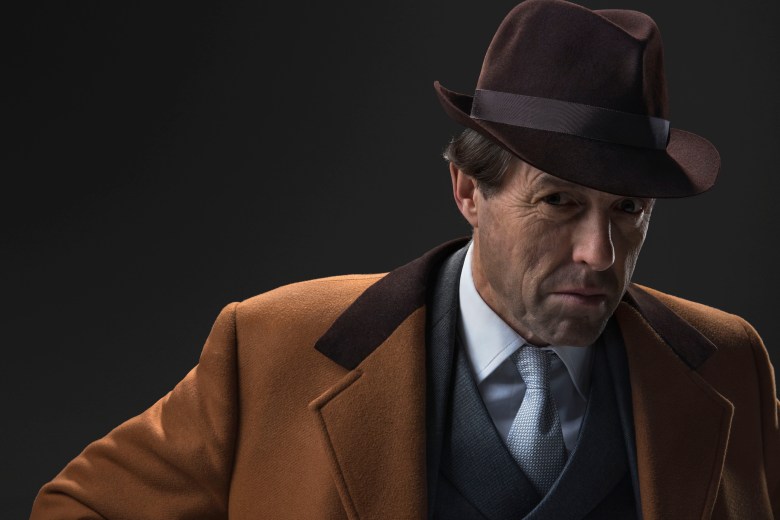 Grant said he also relished the ability to watch actual clips of Thorpe on YouTube and use it as a resource.

“That was the distinguishing characteristic that he was a creature of the ’50s confronted by the ’60s and ’70s,” he said. “It all turns on its head, and this guy who went to the best university and the old boys’ network — suddenly, it’s not working for him anymore. His gay lover is suddenly center stage and being loved and listened to.”

That sense of entitlement hasn’t gone away among the privileged class, as witnessed by the Kavanaugh hearings. “It did seem like he came from a similar world, the American version of it, a sense of outrage that they could even be questioned,” Grant noted.

The story of LGBTQ strides in the UK was an important one for writer Davis to address, Grant noted. “It’s amazing how far we came in 20 years, in the ’60s and ’70s.”

“A Very English Scandal” reunites Grant with his “Florence Foster Jenkins” director, and the actor remains surprised that Frears is willing to work with him.

“I thought, ‘He makes low-budget, slightly left-wing subversive films with tense actors who have been in the National Theatre and the Royal Shakepeare Co. He’s not going to want me from romantic comedies,’” Grant said. “But I kept running into him on planes and at parties. He asked me to do ‘Florence Foster Jenkins’ and that came out very well. But he’s so not what I expected. He sits there and waits to be entertained. Just watches the monitor. And sometimes he doesn’t even watch, he just listens. He’s like one of those idiot savants with the perfect ear. He can hear a false note. He’s always right.” And then there’s his co-star Whishaw, with whom he also worked on “Paddington” and “Cloud Atlas.”

“It’s weird I’ve spent the last three years trying to either kill or have sex with Ben,” Grant said. “I don’t know how that happened.”

IndieWire’s “TURN IT ON with Michael Schneider” is a weekly dive into what’s new and what’s now on TV — no matter what you’re watching or where you’re watching it. With an enormous amount of choices overwhelming even the most sophisticated viewer, “TURN IT ON” is a must-listen for TV fans looking to make sense of what to watch and where to watch it.

Be sure to subscribe to “TURN IT ON” on iTunes, Stitcher, Soundcloud or anywhere you download podcasts. New episodes post every week. Some music by HookSounds.