See how Cate Blanchett, Rose Byrne and more stars of the Emmy-nominated Mrs. America compare to the real people they're portraying. 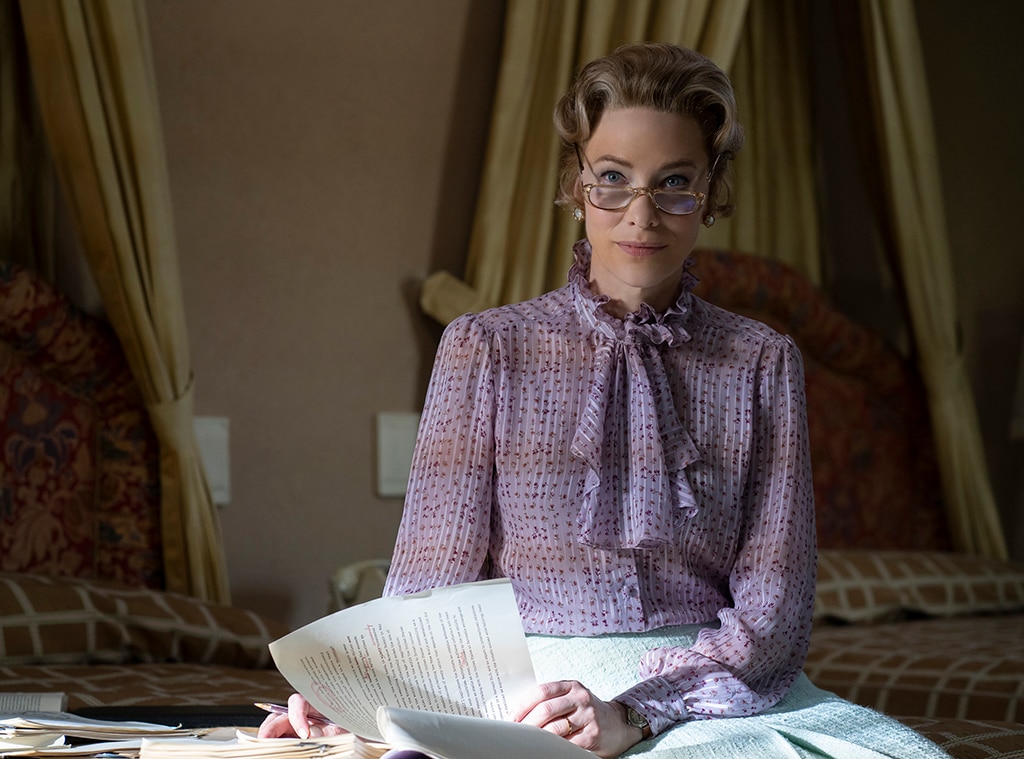 Heavy is the heart for whom the crown remains just out of reach.

Earlier this year, Mrs. America took viewers back in time to the tumultuous 1970s, when the feminist quest for equality took center stage and faced some major (and majorly disheartening) opposition.

Now nominated for 10 Emmys, the FX on Hulu limited series chronicles the ultimately unsuccessful fight for the ratification of the Equal Rights Amendment, a common cause that brought iconic activists Gloria Steinem, Shirley Chisholm and Bella Abzug together, but which also exposed the schisms within the feminist movement—cracks that existed even before they ran up against conservative firebrand Phyllis Schlafly.

Executive-produced by and starring Cate Blanchett as the confounding Schlafly—who argued that society would more or less fall apart if women were granted too much power, as she continued to build her own powerful movement—Mrs. America features an impressive roster of Hollywood talent. And while some, like Sarah Paulson, are playing fictional composite characters created for the series, most of the stars are playing actual people.

Here's a who's-who of the actors who signed up to tell the story of how a major progressive moment gave birth to the so-called Moral Majority, forever shifting the landscape of American politics, and how they compare to their real-life counterparts:

The two-time Oscar winner stars in Mrs. America as the conservative Illinois housewife hell-bent on stopping the Equal Rights Amendment dead in its tracks. She also served as executive-producer on the limited series, so she's a two-time 2020 Emmy nominee, for Outstanding Limited Series and Outstanding Lead Actress in a Limited Series or Movie.

The Bridesmaids and Spy star portrays the iconic feminist figure and co-founder of both Ms. Magazine and the National Women's Political Caucus.

The iconic and chameleonic comedian is nominated for Best Supporting Actress in a Limited Series or Movie for her performance as the fiery author of The Feminine Mystique who is commonly referred to as the mother of the women's movement.

The three-time Emmy winner known for her work on Justified and The Americans could add to her tally if she wins Outstanding Supporting Actress in a Limited Series or Movie for her turn as the three-term Congresswoman from New York who coined the iconic campaign slogan "This woman's place is in the house—the House of Representatives" and spearheaded the effort to ratify the ERA.

The Hunger Games star and Charlie's Angels director portrays the pro-choice and socially progressive Republican appointed by President Gerald Ford to run a presidential commission to advance women's rights, and who fought to keep her party from being overtaken by the Religious Right.

The Orange Is the New Black actress is also Emmy-nominated for Supporting Actress in a Limited Series or Movie for her role as the first African American Congresswoman and first Black candidate to run for president from a national political party when she mounted an unprecedented campaign in 1972.

The I'm Dying Up Here star plays the young feminist and Harvard-educated lawyer who not only co-founded Ms. Magazine with Steinem, but also worked with future Supreme Court Justice Ruth Bader Ginsburg at the ACLU.

The Getting On and When They See Us star appears as the feminist activist and lawyer who served as friend and confidante to both Steinem and Chisholm and co-created the Black Feminist Organization from salon-style gatherings in her apartment.

The Westworld star guests as the conservative Congressman from Illinois with presidential aspirations who became one of Schlafly's most powerful allies.

Mrs. America is streaming on Hulu.