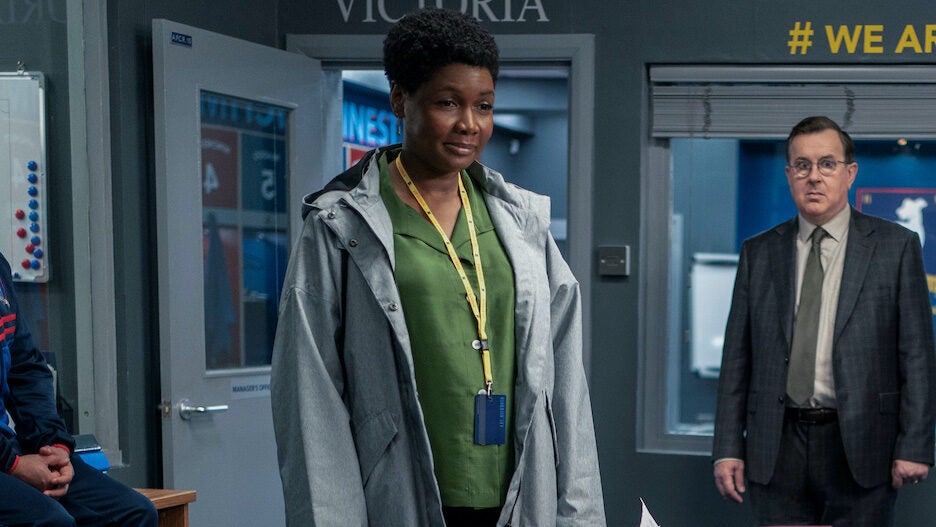 Pound for (British) pound, “Ted Lasso” Season 1 gave viewers the most feels of any series on any platform. Enter: Sharon Fieldstone (Sarah Niles), sports psychologist for AFC Richmond and Season 2 newcomer, who is essentially devoid of any emotion.

In time for her big Apple TV+ debut, we asked Niles how she achieved the right level of joylessness (for now, at least) on a show so very centered on joy.

“I have no idea. I think it’s like the balance of things, isn’t it?” she told TheWrap. “It’s like a seesaw. Ted has all this joy and a bubbly, upbeat personality and is just so hyped — what are you going to do with that? Are you going to try to match it or are you going to just try and simmer it down a bit?”

Nah. Niles’s fun, which is also Fieldstone’s fun, is watching Sudeikis/Lasso “behave the way he’s behaving,” in the actress’s words.

Niles says Fieldstone is all business because that is what the job calls for. “It wasn’t about her,” she said.

So she found the right tone — but this isn’t the kind of show that makes it easy to execute a straight face.

“The first scene was hard,” Niles recalled. “I was just watching them and trying to behave myself. I was trying to be a good girl. As you remember, the first day of school, ‘Be a good girl’ sort of thing. So I was trying to be good and just watching them. And then later on, when I got a bit more relaxed, I couldn’t help myself. I ended up corpsing. And the more I corpsed, it was like a challenge. It was like a red flag to a bull for Jason. And the more he’d start goading and just throwing things out there, I’d just be corpsing.”

“It was hard. Me, Sarah, likes to goof around,” she added. “So it was hard to be that serious.”

“Ted Lasso” Season 2 premiered Friday on Apple TV+. The streaming service will debut one new episode each week over 12 weeks.