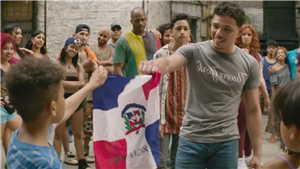 In “Carnaval Del Barrio,” one of the many show-stopping numbers in Lin-Manuel Miranda’s “In The Heights,” the alleys of Washington Heights in the northern tip of Manhattan are draped in flags from all the countries its immigrant residents come from as the cast cries out “¡Alza la bandera!” — “Raise the flag!” The flags of Mexico, Puerto Rico, Cuba, Dominican Republic and even Jamaica all fly as the characters express their pride not just in their nationalities, but in the community they call home.

“My mom is Dominican-Cuban, my dad is from Chile and P.R.” sings the gossipy salon worker Carla. “Which means I’m Chile-Dominica-Curican…but I just say I’m from Queens!”

That awareness of the wide spectrum of Latino immigrant cultures is present in every second of Jon M. Chu’s film adaptation of the Tony-winning Broadway musical, from the Puerto Rican piraguas served during hot summer days to the Cuban guayaberas and Panama hats worn by the dancers as Abuela Claudia (Olga Mendiz) reflects on her mother’s decision to leave Havana in the song “Paciencia Y Fe.” They are, to quote Claudia, “little details that tell the world that we are not invisible.” 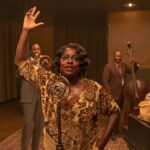 Chon Noriega, professor at the UCLA School of Film, Television and Theater and former director of the UCLA Chicano Studies Research Center, said that “In The Heights” is a welcome counter to Hollywood’s decades-long tendency to not only stereotype Latinos as maids, gang-bangers and sex symbols but also to homogenize the various cultures of Latin America even in films that show that culture in a positive light.

It’s a problem that dates back to the end of the silent film era in the early 1930s, when Hollywood took advantage of the rise of “talkies” and made films in Spanish. Those films, along with imports from the rising Mexican cinema scene, gave birth to Spanish-only cinemas like Los Angeles’ Azteca Theater. But Noriega says that unlike their Mexico City counterparts, the Spanish films from Hollywood didn’t care much for cultural accuracy.

“They would be casting films where all the characters came from different regions of Mexico and different countries in Latin America and Caribbean, and Spanish-speaking audience would be laughing at the screen because they are all speaking the wrong dialects and idioms for those characters’ backgrounds,” he said. “By comparison, the films coming out of Mexico City at the time would shape the characters around the actors playing them; so if they cast a famous Cuban singer, then her character would be Cuban as well.”

Even Hollywood films that touched on real issues faced by Latino immigrants had their own problems. The acclaimed 1961 adaptation of “West Side Story” turned “America,” one of the most popular songs from the Leonard Bernstein-Arthur Laurents-Stephen Sondheim musical, into an exchange between the film’s Puerto Rican characters over the promise and discrimination faced by immigrants at the hands of a racist white culture, all packaged in an iconic song-and-dance number that remains one of the most famous in film history.

But even this came with Hollywood discrimination, as many of those Puerto Rican characters were played by non-Latino actors like Natalie Wood and George Chakiris, all of whom wore heavy makeup to darken their skin. Even Rita Moreno, arguably Puerto Rico’s most famous actor, had to darken her skin in what would become an Oscar-winning performance.

“I remember saying to the makeup man one day ― because it was like putting mud on my face, it was really dark and I’m a fairly fair Hispanic ― and I said to the makeup man one day ‘My God! Why do we all have to be the same color? Puerto Ricans are French and Spanish…’ And it’s true, we are very many different colors, we’re Taino indian, we are black some of us,” Moreno said in a 2017 interview on the podcast “In The Thick.”

“And the makeup man actually said to me, ‘What? Are you a racist?’” she added. “I was so flabbergasted that I couldn’t come back with an answer.”

Ironically, “In The Heights” shared filming space in New York City with Steven Spielberg’s upcoming remake of “West Side Story,” which features actual Latinos playing the Puerto Rican characters and teased more depictions of their immigrant community in its trailer than the 1961 version had. While Maria, Anita and Bernardo filmed their scenes in the original film in apartments and on rooftops built on soundstages, Spielberg’s version was largely shot in Washington Heights, which was transformed to look like the neighborhood did in the 1950s when it was transitioning from a largely Irish community to one filled with Latino immigrants.

Noriega said he found it ironic that “In The Heights” and “West Side Story” are both getting film adaptations this year as he sees Miranda’s musical as a response to the story between the Jets and the Sharks and other stories that base their depiction of Latino communities around their relationship to the larger white community in America.

“What ‘In The Heights’ does so differently is that it doesn’t treat Latino communities as part of a social problem, while so many films dating back to the 1930s that focus on the Latino population not only homogenize it but also treat it as an issue…as a group of people that has to assimilate into American society,” Noreiga said. “The problem itself may not be Latino people but it revolves around them, and so Latinos have to explain themselves and their reason for being where they are. ‘In The Heights’ just treats these people and the home they’ve created as a given.”

It’s the kind of message that he feels Hollywood should take going forward, but first there have to be more Latino writers and directors on studio call sheets.In a recent study by UCLA, only 25% of writing and directing positions for 2020 films were filled by artists of color — just 3% of them Latinos.

“We’ve seen a lot of progress in other areas for diversity, but it is still really rare for Latinos to write or direct a major studio film,” Noriega said. “And as hopefully more Latinos get hired, they are able to bring with them the nuance and detail about Latino life that only comes from their perspective.”