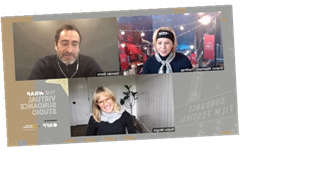 Robin Wright does double duty in the drama “Land”: Not only does she star in the film as Edee Holzer, a woman learning to live again after a near death experience, she also makes her feature directorial debut.

But as Wright told TheWrap’s Sharon Waxman, she didn’t sign onto the project with the intention of directing and starring, but she stepped up when scheduling made it difficult to find someone else.

“Not in any shape or form that was never the intention,” Wright said. “We just we got down to a scheduling issue and a time crunch where we had to shoot this movie in this window of time and we only had 29 days to shoot it and we just couldn’t take the risk trying to hopefully get somebody in that window of time. And then the producers just said ‘Well, why don’t you just do it?’ and I said ‘Well, I’m gonna be there anyway so okay.’”

But Wright says she “had definitely been in the shopping mode for something to direct” after her Netflix series “House of Cards” ended and the script by Jesse Chatham and Erin Dignam spoke to her about an epidemic of real world tragedies.

“It was resonating with me so much because it was during the time of these random shootings that were going on in our country almost bi-weekly and I just kept thinking every day about the grief, the loss, how do people find their way? Just unfathomable that your life changes in a second and this movie is yes about that but it’s really about the acts of human kindness, how we need other human beings to help us get through difficult times and it’s about hope and resilience that it healing can occur,” Wright added.

Demián Bichir, who plays Miguel in the film, jumped at the opportunity to work with Wright both in front and behind the camera. “The whole package was right there, it was the chance to not only work with Robin as an actor but also, just the thought of being a part of her first experience of feature film directing, that alone was was a big deal for me as well,” said Bichir.

“He came to my house for a meeting and the minute he walked in I knew he was Miguel,” added Wright about Bichir.

“Land” had its world premiere at the Sundance Film Festival on Sunday as part the Premieres section.

“Land” is scheduled to be released next month on Feb. 12.