With all the hurry-up-and-wait backstage drama that went into finally greenlighting the sequel to a massive tentpole such as “Dune,” it feels like no small miracle that a postmodern movie memoir like “The Souvenir” gets to have a second part at all. But the double-sided conceit for director Joanna Hogg’s auto-fiction saga was baked in from the beginning.

Viewers who stayed through the end of the first film, one of 2019’s most acclaimed movies, might’ve caught the “insurance policy,” as Hogg called it in an interview with IndieWire, inscribed in the end credits: “Part II coming soon.” Hogg said that was her own personal self-guarantee. “The financiers weren’t going to tell me I couldn’t do it,” she said.

Like the best sequels, “Souvenir: Part II” heightens the stakes for its central character and adds a new layer to her journey. In that respect, the movie’s true ace in the hole that fuses it with its predecessor its astonishing breakout, Honor Swinton Byrne. A genuine discovery in the first installment, Swinton Byrne goes beyond the call of duty in “Part II” with a mesmerizing performance that deserves just as much awards consideration as any other this year.

“Part II” picks up right after the events of the first film, which found budding filmmaker Julie Hart (Swinton Byrne) adrift in the wreckage of her tortured romance with drug-addict and layabout flaneur Anthony (Tom Burke). While that film found Swinton Byrne’s character in the passenger seat of a relationship hurtling toward disaster, the follow-up sees Julie examining the detritus on the path to catharsis. She decides, in an unusual refashioning of the stages of grief, to center her graduate thesis film — at the fictional Raynham Film School in sleepy Norfolk — on the devastating but creatively invigorating fallout with Anthony, interviewing friends, family, and speaking to a counselor in the process.

“I’ve been Julie for quite a lot of my life,” said the 24-year-old Swinton Byrne, whose only starring role before these films was a small part in her mother Tilda Swinton’s film “I Am Love” over a decade ago. “The second one is definitely much more Honor, with Honor slightly bursting out of Julie’s skin a little bit. Honor would come forward, and Julie would bring her back a bit. It was wonderful to spend such a massive amount of time between the two films.” (She shot “Part II” two years after the original.)

Swinton Byrne’s performance in “Part I” was about conveying an interior struggle, the shifting of emotional and psychological tectonics as a doomed love affair consumes her soul. However, her turn in “Part II” is a commanding outpouring of grief, as Swinton Byrne wrests control of her own story to recreate it in front of a movie camera. It’s a remarkable performance whose subtleties provide an inner portrait of the woman as an artist more complete than any film in recent memory.

By the time shooting on “Part II” began in the summer of 2019, Swinton Byrne said, “I was a completely different person. I was much more grown-up and almost more equipped to embody somebody that had gone through a massive life change. I was so held and supported and protected, and encouraged to make mistakes and trial and error, and have these adventures with Julie. I had so much fun doing it, and Joanna just creates the most safe environment for me to experiment with her, and do this improvising.”

That improvisatory environment might be destabilizing for any seasoned actor, but because Swinton Byrne is a relative ingénue, Hogg’s unorthodox approach to her own material hardly required dizzying stretches of the imagination. Like Julie in “Part II,” who presents her thesis proposal to her professors as less an actual script than an outline of scenarios, Hogg doesn’t write in traditional screenplay form. Instead, she works with a kind of literary mood board, a manifesto of discursive ideas, inspirations, and impressions. But that doesn’t mean the story isn’t completely mapped out. 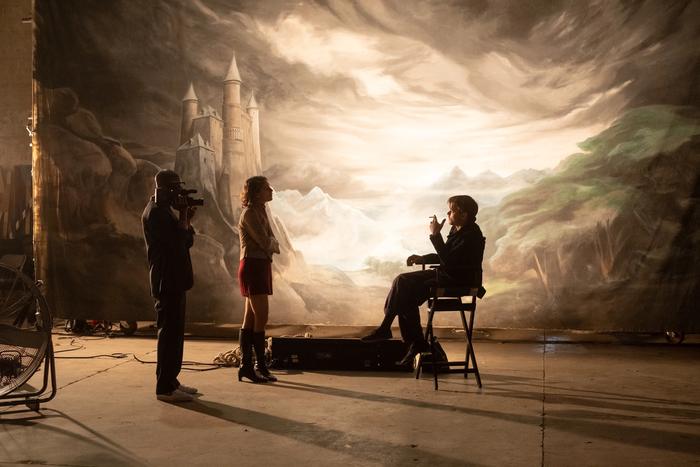 “I make it sound like this document is very watered-down or not very precise, but actually the reason I write the way I do is because I capture better the story or the ideas in more intense form than in a screenplay,” Hogg said. “There’s a real precision to it, but what I enjoy is the giving up of it. It’s like a dance between precision and invention and openness. In the end, it feels like I’ve tossed all the pages up in the air and gone with something else, [but] then when we’re editing, when the film’s made, it’s done this strange reverse thing of becoming again the document that I wrote. So much is internalized, [but] all the ideas, they’re not up for grabs because I am up for something very particular.”

Swinton Byrne said working in this style “came so naturally to me. It was funny, I did a short film with friends recently, all scripted, and I just couldn’t wrap my head around it. I want to change this word, or do this, or that.” But her collaborators, she said, wanted fealty to the script. “I was not so keen on it, to be honest. I like the improv and the spontaneity of it and the creativity, and the no-boundaries, that’s my preferred way to work.”

Julie’s film-within-the-film recasts her producer (Ariane Labed) as a version of Julie, and an actor played by Harris Dickinson as a version of Anthony. The artichoke-like layers of meta-ness that encase “Part II” took on a personal gravity for Swinton Byrne when Julie tries, with much frustration, to direct her actors in a pivotal scene of her thesis. The scene, which finds everyone from the actors to the crew weighing in on how they interpret Julie and Anthony’s emotional arc, was actually directed by Swinton Byrne herself.

“It really does make me want to direct,” she said. “The take was about 40 minutes. It was so long and I forgot that I was being filmed, because I was just walking around asking people to listen to me, directing the camera, trying to very sensitively navigate this sensitive scene with these two actors.”

She added that playing a director in front of a director, Hogg, who herself is distilling her own experiences into the character of Julie, helped her embody the tricky dimensions of the performance. “I’d had an advantage because I’d watched Joanna direct,” Swinton Byrne said. “I found myself doing lots of her little mannerisms. I began to bite my nails and stuff. It came very easily. I think because I’d been playing a director, being around Joanna 24/7, I felt so nourished, like a plant that had been watered.” 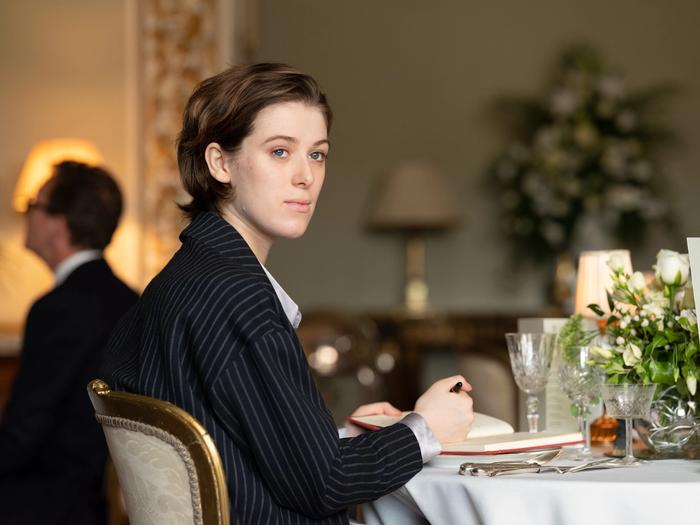 But the movie’s most satisfying apotheosis arrives when Julie hosts a screening of her project for her family (her mother is played by Tilda Swinton) and peers. What plays out on the screen, however, is not the thesis film as we’ve come to understand it, but instead a dreamlike embodiment of the events in both parts of “Souvenir” itself. Hogg weaves a shimmering series of tableaux that recreate key moments from the two films, packed with symbolism, lavish costumes, and production design. It’s equal part Powell and Pressburger and David Lynch.

This hardly resembles Hogg’s own graduate thesis film at the National Film and Television School in Beaconsfield in 1986, which starred her muse and longtime friend Tilda Swinton. But it was a chance for her to remake it, and for Swinton Byrne to step into a funhouse version of her director’s private world.

“It was like I wanted to remake, on one level, my graduate film from film school that, in a way, I regretted soon after,” said Hogg, who poured her own toxic relationship with a troubled man circa her film school days into the two films. “It was so exciting for me to be able to reverse time and go back to making that film again in a way, with a crucial difference.”

The ebullience bouncing between Swinton Byrne and Hogg both in their special alchemy onscreen, and off-screen in conversation, suggests these two have plenty more stories to tell in spite of “Part II” offering a definitive ending for Julie.

“I will never be finished telling this story, ever. I think the next one should be in space,” Swinton Byrne said. “It should just keep going on. It should be a saga. I think we should just never stop making them as we grow older.”

But for Hogg, another installment or spinoff would be less about Julie than Swinton Byrne, whose radiant performance has made for one of the most enriching two-part cinematic experiences of all time. “There are so many stories I could do with Honor,” Hogg said. “Not Julie really. It’s Honor that I’m interested in.”

“The Souvenir: Part II” arrives in theaters from A24 on Friday, October 29.