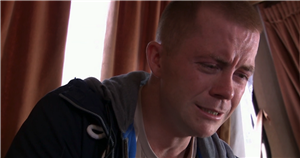 Hollyoaks fans are convinced Eric Foster (Angus Castle-Doughty) is not telling the truth about his missing laptop.

The misunderstood villager was left confused at the end of Wednesday's (November 23) first-look episode on E4 as he couldn't find his device.

It comes after Verity Hutchinson (Eva O'Hara) confronted her brother about his recent dangerous behaviour and asked to see his laptop.

Eric has been involved in a radical misogyny storyline and has been attempting to radicalise those around him, including Mason Chen-Williams. (Frank Kauer), while also spiking women's drinks.

In latest scenes, Verity struggled with what to do about Eric following his ordeal with Maxine Minniver (Nikki Sanderson), after she seemed determined to expose him for spiking drinks.

As Verity thought about what she should do next, Eric found a recording on his laptop that proved she'd been snooping around on his computer and had seen evidence of his recent behaviour, including him bragging about her defending him.

Eric promised he would stop spiking drinks if Verity didn't tell the police about what he'd done.

He claimed coming clean to Verity had already helped him and he would go to counselling, but Verity said she couldn't keep his secret.

He reluctantly agreed to hand over his laptop to her so that she could show the police only to find it had mysteriously gone missing.

Some viewers are convinced that Eric is simply hiding his laptop, while others believe Maxine has managed to grab it when he wasn't looking.

Taking to Twitter, one fan penned: "Who's took Eric's laptop?"

Another person replied: "Probably himself so Verity couldn't take it."

A third person said: "Eric has hidden his laptop but is going to pretend it's been taken."

While a fourth social media user said: "Does Maxine have Eric's laptop?"

Fans will have to wait and see who has Eric's laptop and if his behaviour will be exposed even further.

Hollyoaks airs every weeknight at 6.30pm on Channel 4 followed by a first-look episode on E4 at 7pm