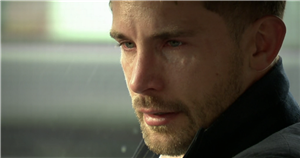 DS Cohen recently returned to the village to inform a confused Brody that he was "meant to be" at Dee Valley Police station under caution over Liberty Savage's disappearance.

Sienna Blake (Anna Passey) insisted DS Cohen told her about the new evidence and was stunned when the detective admitted the development could mean Liberty being dead.

With Brody in shock over being accused of killing Liberty, evil Summer watched from a few metres away with a big grin.

The latest first-look episode on E4 began with Brody being questioned by DS Cohen and shown a blooded headscarf which matches Liberty's DNA.

She informed Brody that the evidence was found under his pillow, leaving him spooked.

Fans of the Channel 4 soap rushed to social media to point out a major error in the storyline.

Taking to Twitter, one fan penned: "Why would he kill her and leave her hairband with blood under his pillow?"

Another added: "Okay but it’s so obvious that summer planted that evidence."

A third person posted: "She's clearly just used the blood from the piece of cloth liberty was using on her head."

While a fourth social media user said: "This is a sign that Summer isn't thinking as clearly as she used to. No way that was enough evidence."

"Hardly enough evidence against Brody to prove murder right? That little amount of blood literally could of come from absolutely anything right? PMT, nose bleed etc," a fifth viewer wrote.

Brody was later released under investigation due to the lack of evidence and became emotional as he spoke to his best mate and Liberty's boyfriend Damon Kinsella (Jacob Roberts).

Summer has promised for months that she would make Brody pay for the role he played in her dad Cormac’s (James Gaddas) demise, and that’s exactly what she did.

With her intricate revenge plan having fallen apart, she was forced to improvise, breaking her fiancé’s heart as she revealed that she’d been sleeping with his ex Sienna

Brody was distraught in the aftermath of the revelation, and wasted little time in demanding answers from both Summer and Sienna.

Sienna was apologetic towards Brody for destroying his happiness once again, meanwhile, Summer set in motion the next step of her devilish revenge plan.

Things went horribly wrong for Summer towards the end fo the dramatic episode as Liberty managed to escape captivity.

Liberty thought it was Summer creeping behind her and ended up knocking out little Leah Hay instead with a huge stick.

Will Summer be able to re-capture Liberty or is it game over for the evil cupcake business owner?

Hollyoaks airs weekdays on Channel 4 at 6.30pm followed by first look episodes on E4 at 7pm