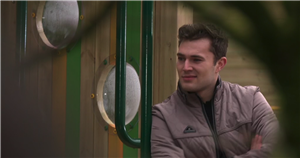 Hollyoaks viewers were left divided on Thursday evening as Curtis Pritchard made his acting debut.

The reality star, who appeared in the fifth series of Love Island in 2019, has joined the Channel 4 soap as Jacob, brother to Marco, who is played by his real-life sibling AJ Pritchard.

Marco made his first appearance in the village last month in time for the opening of rival Trish Minniver's (Denise Welch) dance school.

Trish was concerned about Marco's presence but he made it clear that he's available if she should need any help in the future.

In Thursday's first-look episode on E4, Marco applied to be the dance teacher's new assistant.

Trish confined in ex Fergus Collins (Robert Beck) that she's worried the dancer could ruin her reputation, as rumours had been spread about her in the past.

Dodgy Fergus suggested that she should give Marco an interview.

However, Marco later met up with Jacob in the park, and it was soon revealed that the brothers had a plan up their sleeves for Trish.

Viewers rushed to their keyboards to share their opinion on Curtis' performance.

Taking to Twitter, one fan penned: "Yay Curtis. Great to see him."

Another added: "Oh no Curtis Pritchard comes on our screens now."

A third person posted: "Love Curtis and AJ together."

While a fourth social media user said: "Well Curtis is a better actor than AJ."

It was confirmed earlier this year that Curtis would follow his brother AJ's footsteps to Hollyoaks village.

Speaking ahead of his debut, Curtis, 25, added: "I am so excited to be working with my brother AJ on a show we grew up watching.

"I am also excited to continue our journey together with Channel 4 and E4."

Discussing working with his younger sibling, AJ, 26, said: "It great because Curtis and I know each other so well from dancing and performing live, so we just get to play off that.

"They're really fun characters that are a bit sly."

Fans will have to wait and see what trouble twins Marco and Jacob bring to the village.

Hollyoaks airs weekdays on Channel 4 at 6.30pm followed by first look episode on E4 at 7pm