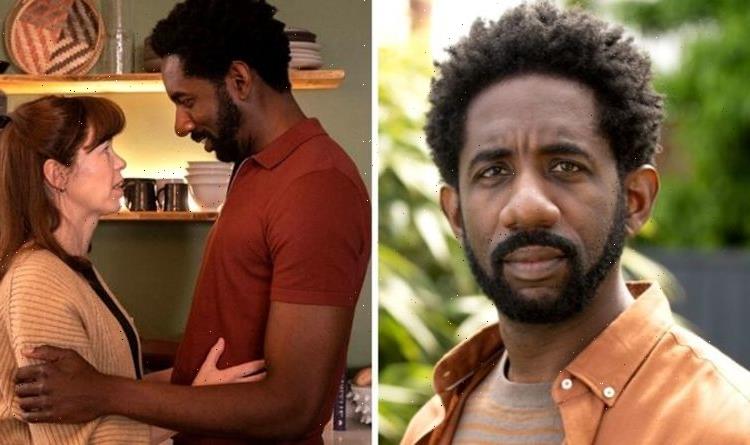 ITV’s four-part thriller series Hollington Drive follows two sisters whose lives are torn apart by tragedy when a child goes missing. Just two episodes have been aired to date, but actor Rhashan Stone, who plays Fraser in the series, has already teased fans about how “satisfying” the ending is.

The series follows sisters, Theresa (played by Anna Maxwell) and Helen (Rachael Stirling), and their families as they enjoy a barbecue in the suburb of Hollington Drive.

However, when Alex Boyd, 10, is declared missing and Theresa and Helen’s children seem to be involved in some way, they begin to fear the worst.

Fraser, who is Theresa’s partner, is happy to let children Ben (Fraser Holmes) and Eva (Amelie Bea) play in the park on their own despite her concerns.

Ahead of the final episodes airing Rhashan said: “Hollington Drive is such a relatable, well-paced, gripping story and it draws you in within the first ten minutes.”

The 51-year-old explained the final episode was kept a secret when he auditioned for the show.

He said: “By the end of episode three I was absolutely desperate to know what happened, it was killing me!

“So when I got the job I just devoured the last episode and it’s a such a satisfying ending.

“When you invest in a thriller it’s so important for people to come away thinking it was a great ending!”

Discussing the gripping plot, Rhashan said: “I think the show is quite original in that usually in a story like this you follow the parents of the missing child, and of course you are steeped in that tragedy.

“But what’s clever about this series is that it’s about the families observing from a distance.

“They start by thinking, ‘Thank God that’s not us’, but then gradually the child’s disappearance encroaches on their lives. They find themselves in a story that they didn’t think they were part of.

“It allows you to step back from some of the high emotion and really dark places that the story might have gone to, and offers a different perspective.”

When asked to what extent does this series play with our idea of the perfect middle-class life, the star replied: “Hollington Drive is a place for people to relax into the comfort of their lives.

“All the forecourts are very clean with a little white Range Rover in front of each house and a lovely garden and conservatory at the back.

“You’re in your safe castle that you’ve built for yourself and you don’t for a second imagine that something’s going to puncture that, everyone’s quite happy enjoying what they worked hard for.

“Then there’s a ding dong on the doorbell, a boy is missing and nothing can ever be the same again.”

The actor said the vanishing child was “such a great start to the series” as it shows the “fragility of our lives”.

“It also shows that everybody has their struggles behind closed doors,” he added.

“Marriages and relationships are difficult and you have to work very hard at them.

“So when you see people for whom it looks effortless, the truth is they’re working as hard as you are.”

Hollington Drive continues on ITV on Wednesdays at 9pm.