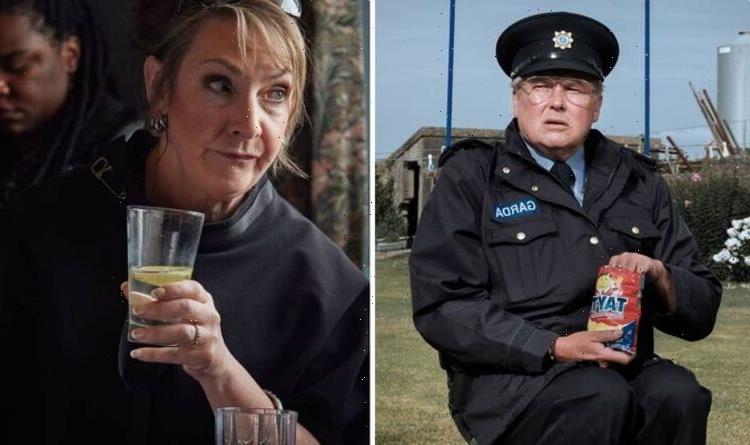 Holding: Remains of a human body are found

Holding made its big debut on ITV earlier this month, leaving fans scratching their heads as well as laughing out loud at the unusual crime series. Set in the beautiful heart of West Cork, Ireland, Holding comes from the mind of host and comedian Graham Norton who published the book of the same name three years ago. The story revolves around Sergeant PJ Collins (played by Conleth Hill) who finds himself in a predicament.

Holding’s tale takes place in the quiet fictional village of Duneen where everybody knows each other’s business.

Sergeant PJ Collins has little actual detective work to do as the tight-knit community’s crimes mainly consist of littering and disputing neighbours.

This is until the remains of a body are discovered and it is up to PJ to find out who the killer is.

The people of Duneen are left shaken-up by the find but could one of them be the killer?

PJ’s main friend in Holding is Brid (Siobhan McSweeney) who is an unhappily married woman with two children and a drinking problem.

In the beginning, it is believed the bones belong to the lothario of the village who had jilted Brid and disappeared.

Because of this connection, Brid becomes one of PJ’s suspects in the murder investigation.

Seeing as they are close friends though, PJ didn’t want to make her sad so tried to cheer her up.

PJ’s first instinct to get a smile out of Brid is to do an impression of iconic actor and comedian Benny Hill.

This was quickly followed up by a sudden spurt of a mini Riverdance jig, leaving fans both confused and laughing.

The Game of Thrones star joked to press, including Express.co.uk, that he did this in two takes.

Writer Karen Cogan elaborated a little more on how this moment hadn’t been planned.

Cogan said: “I was there that day, it didn’t take many takes at all.

“But the most important thing is that a lot of that was Conleth [Hill].

“A lot of it was scripted like a little dance but Benny Hill and that physicality was all Conleth and we were dying! He is just magnificent.

“And he would never admit this but every single take he gives it’s just like ‘yep, that’s great, put that in, just do one more because you’re there but [there’s no need].”

Holding will be back for the penultimate instalment, episode three, on Monday, March 28.

The description reads: “A month has passed and with no new leads the case has fallen dormant.

“As the village tries to put the events behind it, PJ is left harbouring doubts about what happened.”

Holding airs every Monday night at 9pm on ITV.