For years it felt like a third Hellboy movie would never happen. And it’s not.

Seriously, don’t think of this movie as Hellboy 3 (for more on that, see my first point below).

Instead, Neil Marshall’s film is returning to the source material and attempting to bring to a wider audience the world Mike Mignola has been creating now for over a quarter of a century. Below are some of the key ways the new adaptation is trying to achieve that design.

“I was first approached about possibly doing a Hellboy 3,” the British director tells me in between takes on the film’s Bulgarian set. In fact, we’re sat in a dark corner of the Osiris Club, with dark wooden bookcases encircling us. It’s all very atmospheric. “My response to that was, ‘Well, that’s somebody else’s terrain and I don’t want to step on their turf.’ But I was like, ‘If you are thinking about doing a reboot any time, then I’d love to do that.’”

Marshall clearly has a lot of respect for what Guillermo del Toro did on the previous two movies. (So does everyone I spoke with.) “It’s a tough act to follow,” he admits. So Marshall returned to Mike Mignola’s richly weird source material with a simple question… “what could we do that’s going to reinvent it in some way that isn’t radically deviating from the source material but in some ways being more faithful to that source material.”

Emboldened by the successes of Deadpool and Logan (even more recent at the time of the movie’s 2017 production), the new Hellboy feels free to adapt anything in the comics without restraint. While achieving an R-rating isn’t the object in itself, it’s not something that has to be avoided at all costs either.

Releasing the darkness of Mignola’s work is what Marshall felt he should pursue with the reboot. “I just saw so much potential in a darker, more R-rated version of the material,” he explains. “Instantly, Mike Mignola sort of connected with that concept as well, and then everyone else came on board, and it was like, ‘Okay, so let’s go dark with it.’”

“I mean, there’s buckets of blood. There’s beheadings. There’s all sorts of… you know… there’s an intensity,” producer Lloyd Levin unpacks what the R-rating really means. “It applies to intensity. It applies to gore. It applies to horror – graphic depiction. It’s not that we’re grafting an R-rated mission onto the movie or onto the comic book. The comic books themselves are R-rated. It let’s us be more faithful to the graphic novel. And if you’re going to be faithful to the graphic novel, it’s R-rated material.”

Marshall adds, “When they said, you know, it was cool to do the R-rated thing, it did feel like we weren’t making it with kind of handcuffs on in a way.”

3. Stranger Things Got Harbour the Job

How do you even make a Hellboy movie without Ron Perlman?

It was a question that weighed heavy on the mind of Levin. But the solution came from an unlikely source, Netflix.

“We all watched Stranger Things […] I think, at that moment, a lightning bolt went off for everyone, and I said, ‘That’s how’ – you know. David Harbour. Hellboy. I had that. We all did.”

“Everyone involved kind of just – as soon as they saw Stranger Things – just said, ‘Wow, wouldn’t he be – wouldn’t David be a great Hellboy?’ And he was the first person and only person we approached.”

4. The Wild Hunt Is the Biggest Inspiration

While the new Hellboy doesn’t carry a subtitle, it’s indebted to Mignola’s The Wild Hunt (2008-09), the ninth collected book in Mike Mignola’s series.

But out of all the potential stories, of all Hellboy’s fantastical adventures, why pick that one?

“The Wild Hunt – well, it’s a great story, first and foremost,” says Levin. “But also it allows for an origin story – sort of like a backdoor origin story – so we can kind of get into who Hellboy is without, you know, the origin story structure of a comic book movie.

“It felt like a good starting point for a reboot and not have to tell an origin story.”

But it’s not a slavish adaptation of The Wild Hunt. They’re also pulling from Darkness Falls, The Sound and the Fury, and there’s plenty of original material in there too.

“One thing it isn’t,” Marshall points out. “It’s not sort of like a Greatest Hits, but it is a coherent story, at least from one end to the other, but it certainly dips into several different stories that Mignola put together, so I suppose it’s a collage of sorts.”

5. Mignola and His Comics Are Guiding Design

Mignola’s body of work came up, time and time again, as the touchstone for so many different members of the movie’s creative team. But one of the coolest aspects is how Neil Marshall is trying to mirror the comic’s thoughtful use of colour.

“There were several things that we tried to incorporate on the way,” Marshall tells me. “But right at the beginning, our wonderful production designer and DP [director of photography] came up with a colour palette based on the colour palette that exists in the comics, and trying to stick as closely as possible to that.”

So “whenever Hellboy is around, nothing else in the scene is red, unless it’s possibly blood. So we’ve endeavored to sort of create that palette for the whole thing, and give it those bold colors in the field of the comics wherever possible. And yes, deep blacks because we like shadows to be dark.”

Similarly production design Paul Kirby has referred to Mignola’s work continually. This movie was an opportunity to more faithfully and immediately adapt the work of Mignola, which was heavily refracted through the artistic sensibilities of del Toro in the previous movies. 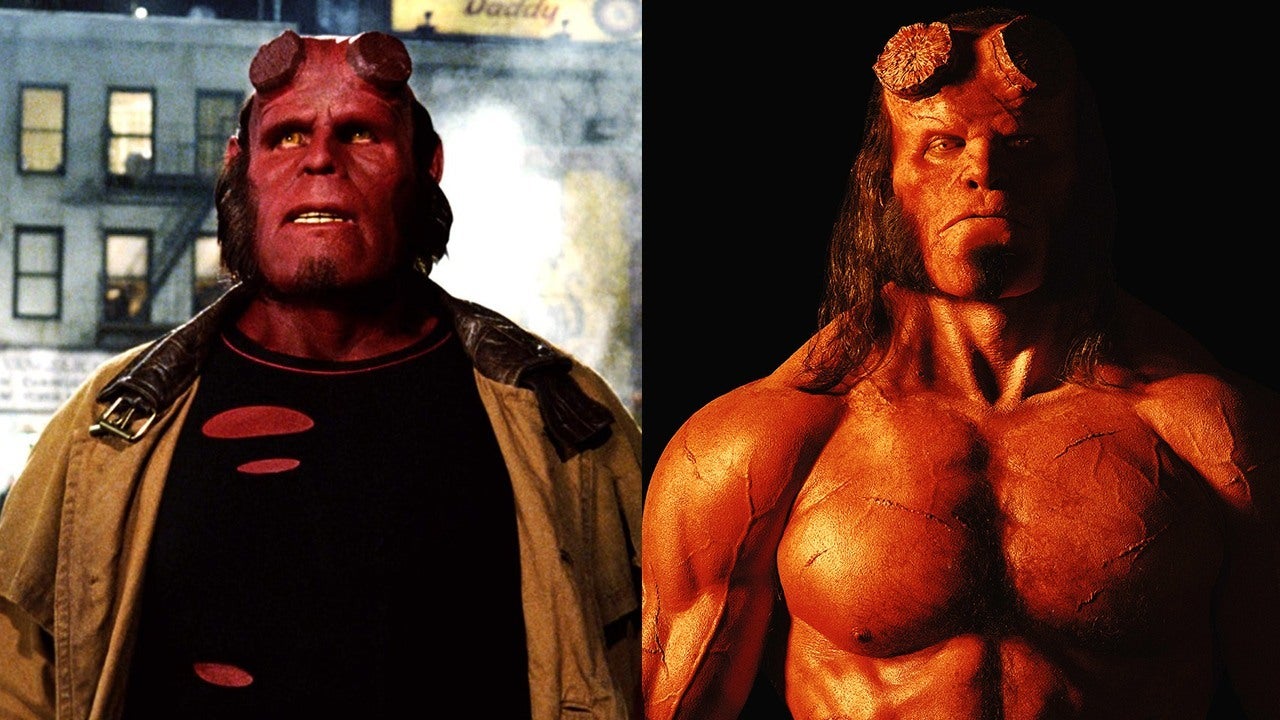 “In our movie, he’s very much dealing with his own being ostracized from society. There’s kind of a Frankenstein element to it. There’s an element of–there’s, I think, a lot more self-hatred. Although those movies it did explore certain aspects of that, ours is just a lot darker in terms of the character piece and in terms of who he is.

“He’s a much more tortured guy who in the end has to do the right thing. This is, you know, he is destined to be the beast of the apocalypse, and maybe one of our goals is to justify the temptations of that destiny in terms of the creation of a world where, as a demon, he might be accepted. As a monster, he might be accepted, that he doesn’t feel in this world.”

11. Hellboy Has the Body of an MMA Fighter

David Harbour in full Hellboy makeup is an intimidating sight. There’s something more grizzled, scarier about this incarnation.

Makeup designer Joel Harlow, like so many of his colleagues, turned to Mignola. “The angle is just really going back to the source material, you know, and going back to Mike’s illustrations. And not just his illustrations but the way Hellboy is treated in his stories is very great. You know, he’s very down-to-earth, […] so I wanted to take it as far away from a comic book look as possible and keep it rounded, which is why he’s got hair on his arms and hair on his chest and scars and all that kind of stuff.

“You know, he’s described as having the body of a MMA fighter, so you’re going to get scars. You’re going to get beat up. We’ve all got scars just from our daily routine, so somebody like that is going to be even more so, you know, more weathered, more distressed.”

12. There’s a Strong Female Villain Who Kicks the Sh*t Out of Hellboy

Since the movie is loosely adapting The Wild Hunt, the central villain is the Queen of Blood, played by Milla Jovovich. Sometimes also referred to as the Lady of the Lake, she is the most powerful of all the British witches, and has served as antagonist several times in the comics.

Marshall knew he needed a powerful presence to play opposite what Harbour was doing with the lead character. “It is difficult, because he’s such a presence, you know, he’s a huge, great red demon guy, Marshall points out. “And Milla comes in and can stand next to him and not drown him out, but she’s there, and a total presence, and you feel it in every beat of every word she says and every moment and every look she gives.

“It’s like, ‘Okay, he’s got his work cut out for him, dealing with that.’ And she’s amazing, she’s been so much fun to work with. Such a pleasure, and delivers this absolute powerhouse performance.

“I think also for us just having a female villain was – it just felt good. It felt right, and it was good that this woman comes around and kicks the sh*t out of Hellboy. Yeah, that’s cool.”

13. It Could Be the Start of the Mignola-Verse

Hellboy has been around for over 25 years, and has spawned a host of weird and curious supporting characters. Some of been adapted before with varying degrees of success – Abe Sapien, B.R.P.D. – while others have yet to be given a chance – Lobster Johnson, Witchfinder. Could this version of Hellboy introduce a wider audience to this pantheon of paranormal characters?

“I know all that kind of stuff has been discussed,” admits Marshall. “But it’s so far in the back of my mind. Like right now, this is the focus, 100 percent. Get this done, make it the best film it can possibly be, and then see what happens.

“If that comes off, great. What an adventure and what a world to open a big door on? The B.P.R.D. and all the other characters. The huge universe that Mike’s created over the years it to tap into, but I cannot think about that right now.”

Producer Lloyd Levin, who worked on the previous two movies, feels excited by the idea of eventually realising Mignola’s work on the big screen. Especially as he thought it might not happen as del Toro’s third movie never came about. “You have over 20 years worth of stories and, you know, dozens of characters, and just felt like there was so much more of the Hellboy universe to explore or the Mignola-verse to explore.”

But Marshall is resolutely focussed on this movie. The one that has to succeed for all of that to follow. He’s not bothered about all that just yet. His hope is modest: “I would love [audiences] to walk away having seen, from their point of view, an original Hellboy movie.”

What better day than Saturday, March 23, aka Hellboy Day, for movie tickets to go on sale? Get them here.