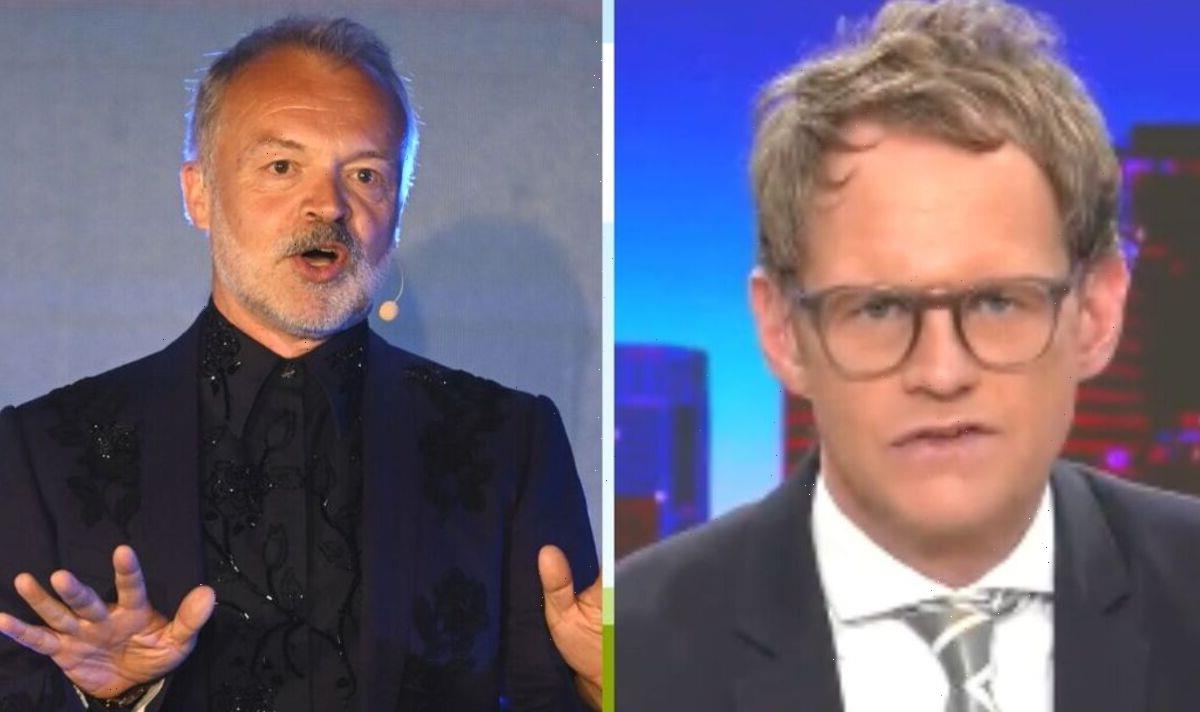 During his show on GB News, host Mark Dolan launched into a rant about Graham Norton, who recently shared his thoughts on “cancel culture”, referencing how hard it must be for the likes of John Cleese, who has also voiced his opinion about being cancelled. Mark also defended JK Rowling, claiming the likes of Daniel Radcliffe and Emma Watson wouldn’t be anywhere without her.

“Now, Graham Norton is one of the great chat show stars of the last few decades alongside Wogan, Parkinson, and Jonathan Ross.

“But I was profoundly offended by his comments given that Norton himself as a privileged and very well-paid presenter, should seek to gaslight the huge numbers of artists and creative people who have been or feel censored, or who have had their livelihoods destroyed for having the wrong views.”

Turning his attention to JK Rowling, who has also hit back at Graham over his comments, Mark continued: “What about the colossal amount of vitriol poured in the direction of our greatest living author JK Rowling, the best-selling genius who taught a generation of young people to love books.

“Her crime, pointing out the scientific fact that there are two biological sexes… a man and a woman.

“And as a former domestic abuse victim speaking up for women’s only rights, women’s safety and female-only spaces, for that she has been disowned by the stars of the Harry Potter films.

“Acts like Daniel Radcliffe and Emma Watson have publicly thrown her under the bus purely for quoting GCSE biology textbooks.

“The comments of Radcliffe and Watson are particularly egregious given that Rowling gave them a career when she cast them in that billion-dollar movie franchise.

“If it wasn’t for her, Emma Watson would be flipping burgers at McDonald’s and Daniel Radcliffe, if you’d made it in acting, would be playing a dead body in casualty.”

The GB News host went on to hit out at Graham once again, claiming the host has: “Benefited so much from a culture in which he has been able to do his often risky and to some offensive comedy.”

Despite admitting to loving Graham’s Channel 4 show, Mark added: “But this is the abusive dynamic of so-called woke culture. Extreme political correctness and the policing of words and thoughts.

“Norton’s remarks were astonishingly ageist as well, as he described Cleese as a typical man of a certain age who’s now facing accountability for his comments and doesn’t like it.

“How can an entertainer like Norton possibly justify muzzling John Cleese, a man who gave the world Fawlty Towers, Monty Python and A Fish Called Wanda?

“If this culture of political correctness and ultra-censorship had existed back in the day, we wouldn’t have that wonderful body of work that we currently enjoy.”

He pointed out that French and Saunders and Billy Connolly have admitted they wouldn’t be able to perform the same comedy these days.

“It’s unfortunate that I have to explain this to him,” Mark said. “But Graham Norton clearly doesn’t understand what free speech is.”

In an interview shared earlier this week, Graham discussed his thoughts on cancel culture and admitted that free speech isn’t consequence-free.

He began: “You read a lot of articles in papers by people complaining about cancel culture and you think, in what world are you cancelled?

“I’m reading your article in a newspaper, or you’re doing interviews about how terrible it is to be cancelled?”

He added to Times Radio: “John Cleese has been very public recently about complaining about what you can say and I just think it must be very hard to be a man of a certain age, who’s been able to say whatever you like for years, and now suddenly, there’s some accountability there.”

Express.co.uk has reached out to Graham Norton’s reps for comment.

GB News airs weekdays from 6am.