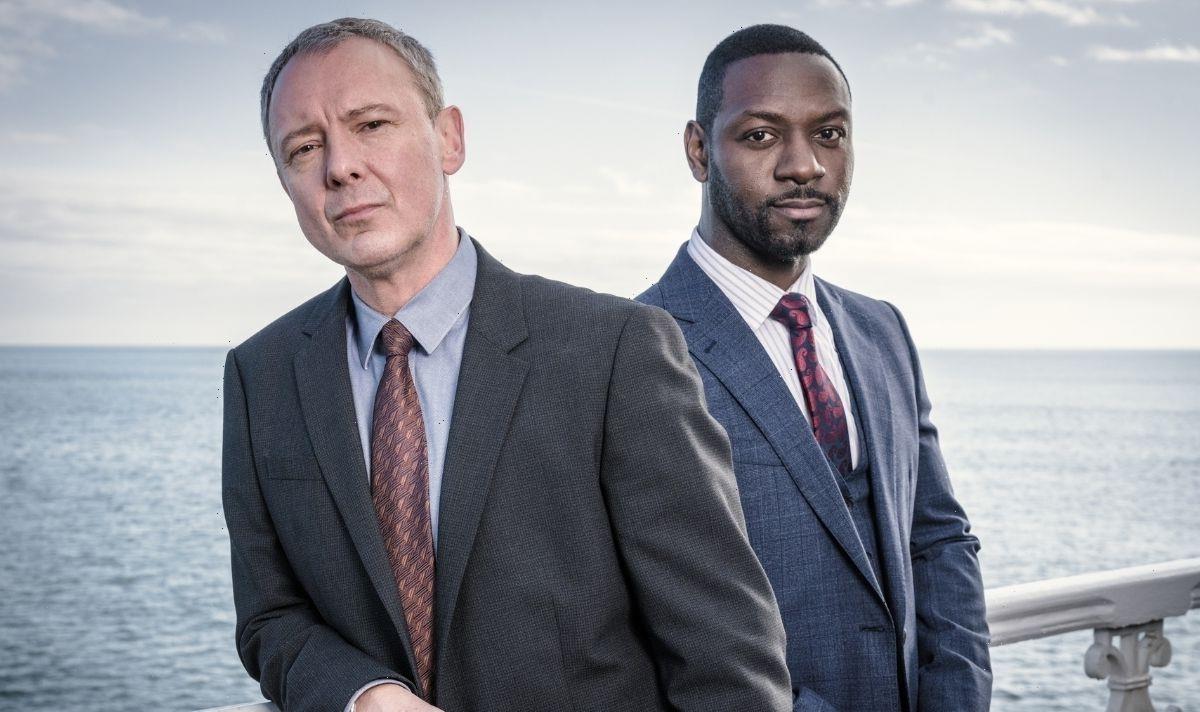 The ITV crime drama Grace is back on viewers’ screens in just a matter of days, and ahead of its new outing, some of the cast have divulged what to expect. Richie Campbell plays DS Glenn Branson in the hit show and is a friend and colleague to the troubled Roy Grace (played by John Simm). The new season introduces a host of new characters, and Richie has called out one in particular.

Grace follows the personal and professional life of Detective Superintendent Roy Grace, who continues to work despite the unsolved case of his wife’s disappearance six years prior, affecting his mental health.

Looking Good Dead is the upcoming TV film to land and will launch as part of the second series.

The synopsis of the next instalment reads: “Detective Superintendent Roy Grace suspects the sudden death of a former schoolteacher found in suspicious circumstances in a respectable Brighton backwater may not be the drugs overdose it first appears.

“And, when human remains are discovered in a Sussex crop field, Grace and Detective Sergeant Glenn Branson are drawn into an investigation that will test their abilities and their friendship to breaking point.”

As he and partner DS Glenn Branson dive deeper into the case, they uncover a larger force at work.

Read More: Where is Anne Darwin now? What happened to her?

At a press screening, Express.co.uk and other press saw a sneak peek of what’s to come in future instalments and got to talk to the cast, including a new love interest for Roy in future outings of Grace, Zoe Tapper who plays Cleo Morey.

Although Cleo appears in a later TV adaptation of the Peter James’s Books, Richie let slip that she plays an important part.

With Cleo and Roy falling for each other, Glenn becomes a bit of a third wheel.

When asked about Cleo and how she impacts their on-screen dynamics, he said: “She’s kinda killing the bromance a bit.”

He joked: “No, no he is very happy for him [Roy], it’s nice to see him smiling again.

“Sandy [Roy’s wife] has been missing for seven years, and Glenn and Harry Frame (Adrian Rawlins) have said you need to move on.

“So seeing him moving on is nice, and also, they are trying to keep it away from Glenn, but Glenn sees it so there is that element to play.”

Chiming in to defend her character and her bond with Richie, Zoe added: “Richie has actually been my husband in a different drama as well.”

DON’T MISS…
Lorraine skewers Starmer over calls for Johnson to resign ‘What are Labour doing?’ [LATEST]
Ukraine general forced to sit out war freed ‘Shamefully, Germany had him banged up!’ [LATEST]
Where is John Darwin now? What happened to Canoe Man? [LATEST]

Glenn also has a love story, but it isn’t quite as optimistic.

His marriage is set to face some trials and tribulations, with the star adding: “Yes, there is a bit of friction at home, and he’s trying to keep it separate from work, but that’s where the friendship with Roy comes in – Roy knows his mate, and he sees the tension, so there are a lot of conversations between them about what is happening at home.

“Further down the line we’ll definitely see more of that, because it really seeps into his work life and becomes an issue.”

On reuniting with his cast for season two, he said: “It felt like a proper reunion, it was so nice, we’ve got such a great cast.

“First time round, everything was very new and a lot of us hadn’t worked for a while because of the pandemic. This time it just felt really comfortable and it flew by – I couldn’t believe it when we’d finished, I wanted to film more!

“I quickly got back into being Branson, and John and I feel very comfortable with each other, so hopefully that shows on screen. All the stories are so brilliant, I’m excited to see how people will react to them.”

Much like season one, which premiered in 2021, the second instalment will be made up of three 120 minute-long screenplays.

The TV show is based on the best-selling novels of the same name, and although there are 17 novels, it is unclear how many small-screen adaptations there will be.