Andy Burnham joined Kate Garraway and Ranvir Singh to discuss his decision to block Boris Johnson’s plan to bring Greater Manchester into tier 3 coronavirus restrictions. However, as the Great Manchester Mayor explained what he hoped would be gained from the latest round of discussions with the Government, the two Good Morning Britain presenters spoke over Burnham and ITV viewers weren’t impressed.

Speaking about the midday Government deadline to reach a deal, Burnham said: “The ultimatum letter we got late last night was a little odd as it talked about the possibility of additional support. But the Government has never given us a figure about what that might be. They’ve never put a figure on that.

“What I will do this morning is consult with the ten council leaders of Greater Manchester and I would expect that we would be writing to the government this morning to say, we think we need support that reflects the fact that we’ve already been three months in these restrictions and we need flexibility to support the people and businesses that I was talking about at the start of this interview.

“There’s the basis of a deal within that if we can agree both the level and flexibility so we can support people.

“This isn’t just about a cheque for Greater Manchester and our councils, this is about that help for people and businesses who will be severely damaged by a Tier 3 lockdown.” 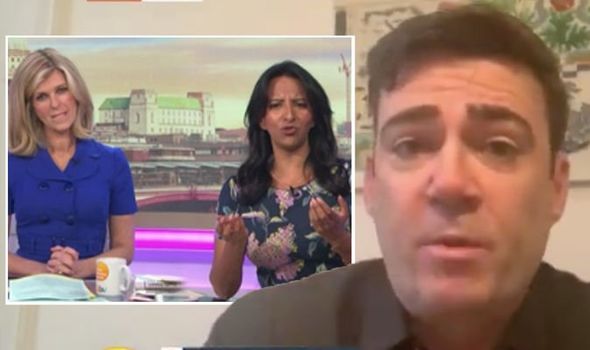 Singh asked if it is imposed, will his constituents follow the rules after he’s been so against it.

Burnham went to answer but Singh interrupted: “You’ve created a rod for your own back in a way when you’ve stood against the thing you want them to do.”

He replied: “I’ve never said I wouldn’t accept Tier 3 under any circumstances, what I’ve said is if you’re going to do it, you have to support people properly through it.”

Interrupting, Kate said: “But Andy people don’t listen to every word you say, they form an overall impression.

“You have publicly delayed for what you think are good reasons for the people of Manchester but the perception is he’s standing up to the government, he doesn’t want us to have tier 3 unless we have money and if it’s imposed the impression will be that resistance isn’t futile.

Burnham replied: “I think there is a risk that isn’t there, but I would say it’s a risk the Government are taking.

“I’m trying to be constructive. They’re the ones that set the ultimatum, not me.”

Burnham said: “The attacks that have been thrown at me in recent days, party politics….” Garraway tried to interrupt but Burnham spoke over her as he continued: “Politics should be about speaking for people who don’t normally get a voice…

“I won’t make an apology to the government or anybody for speaking for those people. It is my job as the Mayor of Greater Manchester to stand up for my community.”

GMB viewers took to Twitter to slam Garraway and Singh for interrupting Burnham.

One tweeted: “This interview with @AndyBurnhamGM on @GMB is disgraceful. The verbosity of the questions painting Andy as the bad guy by @ranvir01 and @kategarraway is not enough, they also keep talking over him when he’s trying to get a word in to answer their criticism. #GMB.”

Another shared: “Is this @ranvir01 trying to copy @piersmorgan… let Manchester mayor @AndyBurnhamGM reply before talking over him #gmb @GMB.”

“#GMB Could the presenters ask more concise questions and give the guests more time to talk?” Someone else asked.

A fourth pleaded: “#GMB I’ve got a bad head, please ladies stop shouting over each other and the interviewees.”

“@kategarraway @ranvir01@GMB, when you have guests on like @AndyBurnhamGM and you ask a question, please let them answer. Constantly butting over the guest to have more of your say is frustrating for the viewer #gmb #covid,” a fifth remarked.

Someone else said: “How is Kate Garraway talking about not listening to what people have to say when she’s just cut him off???!!! #GMB.”