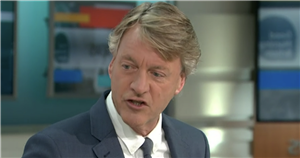 Richard Madeley managed to get on the wrong side of Good Morning Britain viewers on Tuesday morning.

The 65-year-old presenter was back on our screens alongside Susanna Reid to discuss the latest news headlines on the ITV breakfast show.

Susanna, 50, asked her co-star if his son Jack managed to get married after he previously admitted that Covid restrictions had "really screwed up" plans for the big day.

Richard proudly announced that Jack married Issy on a glorious Saturday afternoon in June with 150 people in attendance due to the ceremony being outside.

He went on to explain that the stress leading up to the big day left the groom, bride and the rest of the family with a "touch of Post-traumatic dress disorder."

Unhappy viewers rushed to their keyboards to discuss Richard's bizarre choice of words.

Taking to Twitter, one fan penned: "Richard Madeley using the term PTSD loosely there, get rid of him he’s so full of himself."

Another added: "PTSD is not a joke, Richard."

A third person posted: "So Richard felt tired, 'We all had a touch of PTSD' Ahh. So let's belittle every one who doesn't have a touch of #PTSD."

While a fourth person posted: "That comment was out of order."

The wedding took place in Burwash, East Sussex, at the end of June and the family including Judy Finnegan and Chloe Madeley all joined together for the celebrations.

Richard and Susanna kicked off the latest edition of GMB by discussing the news that wearing face coverings will no longer be law after July 19.

Prime Minister Boris Johnson announced on Monday afternoon that people will no longer be legally required to wear face masks in any setting.

He confirmed that all legislation regarding face coverings will be repealed at step four of the government's road map, when all remaining restrictions are set to be lifted, and that wearing a mask from this point onwards will become "a personal choice".

It means it will no longer be compulsory for individuals to wear masks in shops or when entering a bar or restaurant.

Mr Johnson said: "We want people to exercise their personal responsibility but remember the value of face coverings both in protecting themselves and others."

Richard said: "Although I am glad that I am now not being told to wear a mask I will continue to wear one for precisely the reasons you said.

"Until everyone has been double jabbed and until I sense everyone out there are comfortable with getting back to a massless society, I will continue to wear mine.

"I totally accept its good manners not to spook other people.

Susanna said: "That's very community minded of you but there will be plenty of people won't.

"I've already seen a lock of compliance. The people I'm concerned for are those who are not double jabbed and the elderly."

Richard added: "Boris' point is that it's up to us to take that responsibility ourselves."

Susanna hit back: "But it's not up to my parents what other people do."

Good Morning Britain airs weekdays on ITV at 6am