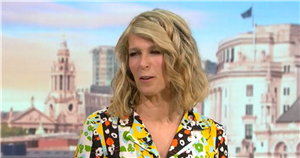 Good Morning Britain viewers have been joining in the support for England this week as the hosts have been celebrating the win throughout the week.

The next game takes place tomorrow, and while viewers are excited to see England play in the quarter-finals, some people think that Kate Garraway may have taken it a step too far this morning.

Ukrainian Ambassador to the UK, Vadym Prystaiko, was welcomed on the show this morning to discuss the England versus Ukraine match tomorrow.

While Kate and Adil were dressed well to support their team, Kate said she couldn't bring herself to wear it, before adding that the map on the yellow top looked like a "stain".

Speaking about the shirt, she said: "I don't know if you can see closely but there is a map on the front of your T-shirt. It's hard to see.

"It sort of looks like the kind of t-shirt my son would pick up off the floor and thinks that's not too dirty. It looks a bit like a stain."

Kate responded: "Well you know what I mean, it does a bit!"

Viewers were quick to slam her on Twitter, with one user writing: "Did she just say that?"

While another added: "Kate is so rude."

They wrote: "Could you imagine the uproar if [Piers] Morgan had said to the Ukrainian Ambassador that his country looks like a stain on the shirt?"

Others stated that they were "cringing" at the comment.

The quip came after Vadym Prystaiko told the hosts that the Ukrainian community are very excited because it's the first time that they have climbed that high.

Adil Ray reminded the ambassador of Jack Grealish, but he was soon shut down as the ambassador added: "We do have a couple of people on our side too!"

The football match is taking place in Rome, but sadly, due to Covid-19, England-residing fans will be unable to attend.

However, there are still some fans showing their support as any England supporter living elsewhere in Europe will be able to attend.

GMB continues tomorrow at 6am.