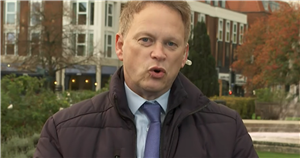 Good Morning Britain was thrown into chaos when a heckler gatecrashed an interview with home secretary Grant Shapps.

The Conservative MP appeared on Monday's episode (October 24) of the ITV programme.

Speaking with presenters Richard Madeley and Kate Garraway via video-link, Grant was asked why the Conservative party wouldn't give the public a general election following Liz Truss' departure as PM when a heckler took matters into their own hands.

As Grant attempted to answer the question, the heckler yelled: "We want a general election!"

One viewer wrote: "That bloke in the background doesn't agree with Grant Shapps!"

Another said: "They yelled ‘we want a general election grant’ just as he was saying his constituents don't."

A fourth said: "Shapps clearly used to being heckled."

The heckler could be heard shouting further comments as the interview continued.

Ignoring their shouts, Grant answered: "A party is elected for a five-year term… and I'm standing here in my constituency and every single person here when they voted had my name on the ballot paper.

"I was elected. You vote for the individual in each constituency."

Firing back, Kate Garraway argued that the British public had seen a "rollercoaster of shifting policy" over the past few months.

She later added: "People are bewildered about what the tory party represents."

Good Morning Britain airs from 6am on weekdays on ITV.