Who is in the cast of Ghosts series 2?

Reprising her role as human Alison Cooper, who can see the ghostly inhabitants of her mansion is Charlotte Ritchie.

She is best known for her role in Call The Midwife but has also had roles in Doctor Who, Feel Good and Fresh Meat.

The actor has previously starred in the BAFTA-winning Stath Lets Flats Enterprice and Friday Night Dinner. 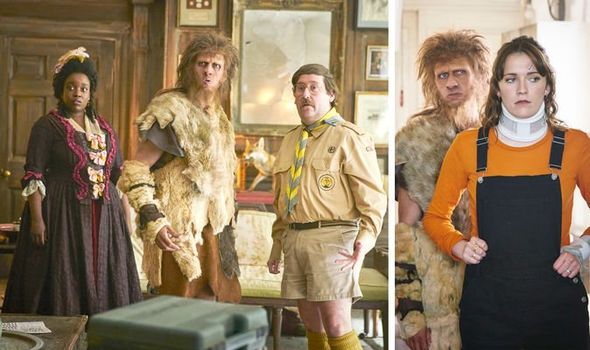 Jim Howick plays scoutmaster Pat Butcher, who met an unfortunate end after he was accidentally shot in the neck with an arrow by one of his young wards.

Howick is no stranger to screens as one of the alumni of Horrible Histories as well as starring in Broadchurch and Sex Education.

Howe-Douglas is also from the Horrible Histories team as well as having roles in Doctor Foster, Yonderland and Crackanory.

Co-creator Mathew Baynton will be back as the failed romantc poet Thomas Thorne who is in love with Alison.

Baynton has appeared in BBC drama The Split, Vanity Fair, Quacks as well as being part of Horrible Histories.

Simon Farnaby put on the mantle of disgraced MP Julian Fawcett, who was caught up in a sex scandal in the Nineties when he met an unfortunate end.

Among his previous credits are Detectorists, Yonderland, Top Coppers and Horrible Histories.

Actress Adefope has featured in Yonderland, Shrill, Miracle Workers as well as movie The Spy Who Dumped Me.

Taking on the oldest of the ghosts in the house Robin the Caveman is Laurence Rickard.

He is best known for being an actor and writer on Horrible Histories, Yonderland and the Tracey Ullman’s Show.

The actor has starred in Imagine Me & You, Yonderland, There She Goes and Tracey Ullman’s Show.

Wix is known for her roles in Torchwood, The Windsors, Not Going Out, Agatha Raisin and Stath Lets Flats.