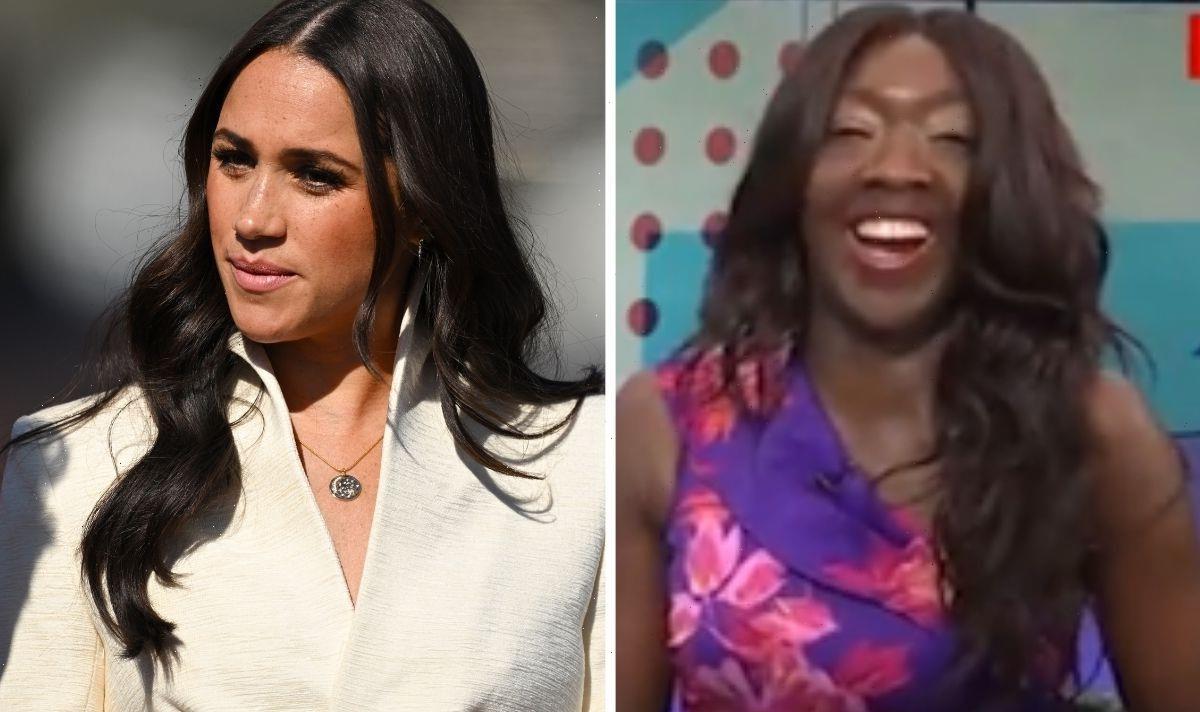 During Nana Akua’s show on Saturday’s GB News, the host chatted with royal expert Charles Rae about the Queen’s appearance this week at the Windsor Horse Show. However, towards the end of the chat, Nana couldn’t resist blasting the Duchess of Sussex, as she brought up the royal being snubbed from appearing on the balcony for the Queen’s Jubilee.

Her remark came after the Duke and Duchess of Sussex, who are no longer working royals, were barred from joining the Queen on Buckingham Palace’s balcony for Trooping the Colour.

The host began by chatting about the Queen’s recent public appearance and her health.

“Now speaking of the fantastic woman, the Queen, well she’s been out and about,” Nana said.

Charles replied: “I think after all the months and months of anxieties that we’ve all had in this country about her health, it was absolutely fantastic to see her at the Windsor Horse Show.

The royal expert continued: “Arriving first of all in the Range Rover, then walking with a stick to her place to watch some of the events and it was good as well, she got a standing ovation, which was fantastic.

“She had the old headscarf on the back to you know, the glory days.

“But it was fantastic to see her, absolutely fantastic and I think we can allay the fears.

“We know the legs aren’t working properly, we know she’s getting older, but apart from the legs, her health is partly in very good condition.”

Nana weighed in: “I’m so pleased to hear that because there was one person who said that they were so amazed that they got to see the Queen upfront.

“And I mean, it’s when people say things, ‘The Royal Family, what’s the point of them and all that?’ Well, this is the point.”

As the segment came to a close, Nana brought up the fact Meghan and Prince Harry would not appear alongside the Queen on the Buckingham Palace balcony.

“People like Meghan [Markle] just couldn’t simply hack it at all,” the host said.

“So that’s why she’s no longer part of the Royal Family as a working Royal and won’t be on the balcony,” she went on to add before continuing to laugh about it.

“Sorry,” she apologised to Charles before laughing again: “I’m so evil.”

It has also been reported that Prince Andrew, the Queen’s son won’t be appearing on the balcony for the opening Jubilee celebrations.

A spokesperson for Prince Harry and Meghan Markle confirmed the couple would be coming to the UK for the Jubilee with their two children, Archie and Lilibet.

The royals said they are “excited and honoured” to attend the Jubilee celebrations.

The Platinum Jubilee will celebrate the Queen’s 70-year mark as the reigning Monarch.

Celebrations will take place over a four-day Bank Holiday between June 2, and June 5.

GB News airs weekdays from 6am.