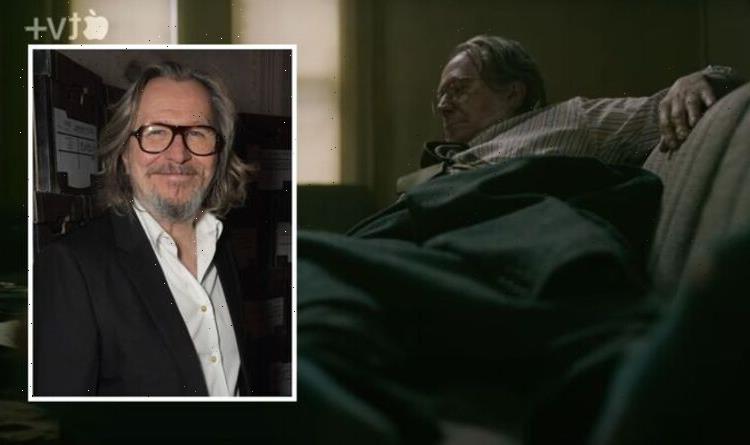 Apart from a few guest spots here and there, actor Gary Oldman can usually be seen in blockbuster movies or on a theatrical stage. However, he is helming the newest British crime drama on Apple TV+ Slow Horses. The 64-year-old has opened up about his no-nonsense character and what it was like to play a man with “no filter” who is a “tornado” of disruption.

The synopsis of the gritty show reads: “[Slow Horses] follows a team of British intelligence agents who serve as a dumping ground department of MI5 due to their career-ending mistakes.

“Led by their brilliant but irascible leader, the notorious Jackson Lamb.”

On his unorthodox character, Gary said: “For me as an actor, having now played him [Jackson Lamb] for 12 episodes, I know that Mick [Herro, author of the book series] is the imagination and creature or Jackson Lamb.”

Talking to Express.co.uk and other press at the World Premiere, he continued: “But I think what makes him most memorable to me as an actor is that he is a man who wants to give the impression that he really doesn’t give a hoot.

“There’s no filter, no bulls**t and in a landscape of clinical correctness, Jackson Lamb is sort of like a tornado.”

On his character, he concluded: “Playing Jackson Lamb is like easing yourself into a bath of dirty water.”

Within minutes of the first episode, fans are shown the type of person Jackson Lamb is.

His introductory shot shows him asleep on a sofa in his office, with holes in his socks, and then suddenly, he wakes himself up with a noisy outbreak of flatulence.

He is straight-talking and foul-mouthed, yet somehow his team wants to win his approval.

Mick spoke about his involvement in taking the story from page to screen at the premiere.

He described: “The easy answer would be to say, a dream come true.

“But in fact, it has not really been like that.

“Involving the TV started just about eight years ago, and at the time, if I was asked where to pitch my dream it would be there, [he signalled a low position with his hand].

“But the reality is, it’s way up there [He held his hand above his head].

He went on to praise the cast, the crew and the writers of the TV adaptation and how it had exceeded his expectations.

Fans of the show will both love and be annoyed by his team of MI5 agents who had all fallen from grace for one reason or another.

Episodes one and two – Failure’s Contagious and Work Drinks – have already landed on the streaming platform, with the remaining four episodes airing weekly on Fridays.

Although Gary referenced playing the character for 12 episodes, Slow Horses is set to be released in two parts.

Each section is made up of six episodes at a time.

The second batch will focus on the second novel Dead Lions.