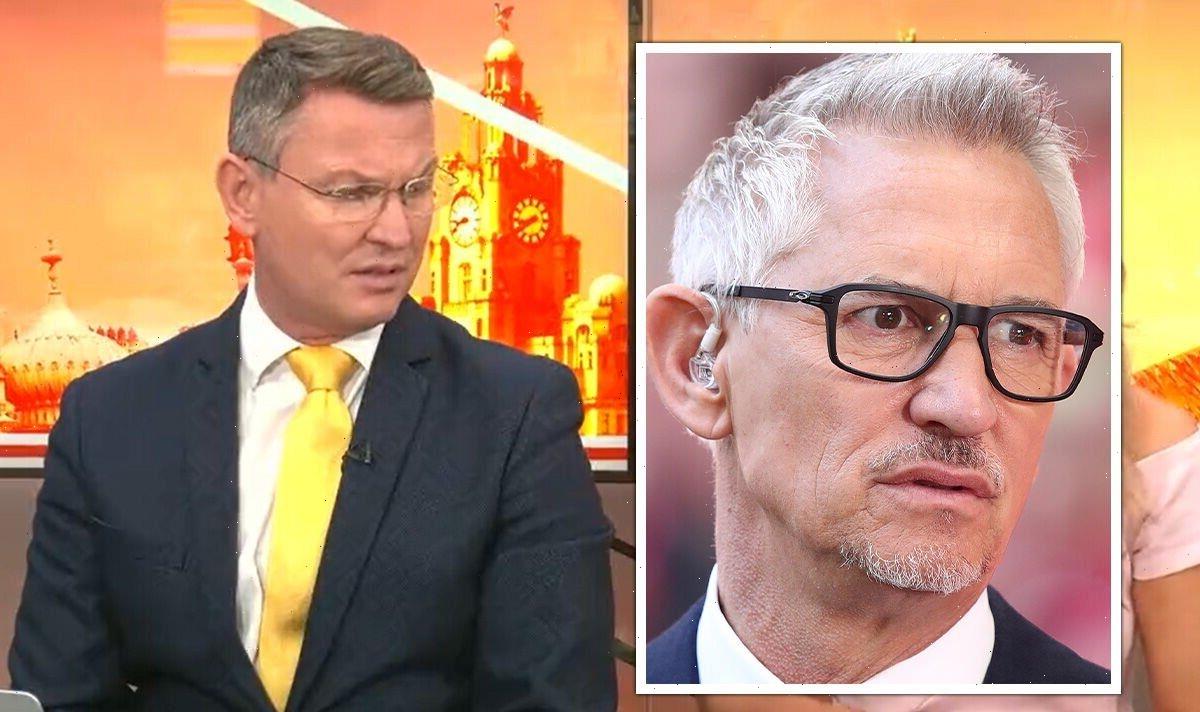 Former England player Gary Lineker has been criticised by GB News host Stephen Dixon after it was reported he wants players to come out as gay during the 2022 World Cup which kicks off in Qatar next month. Same-sex sexual activity is punishable by seven years in jail or even death by stoning for Muslim men under Sharia law. Gary’s comments were branded ill-considered” and “irresponsible” on GB News.

Ahead of the football tournament starting on November 20, Gary stated: “It would be great if one or two of them came out during the World Cup. It would be amazing.

“I know for a fact that some have been very close and contemplated it.

“There’s a couple I know, but obviously, it’s not for me to say who they are,” he told the Daily Mirror.

While Gary is facing a backlash for his comments, England captain Harry Kane has vowed to wear a OneLove armband during the World Cup, even if it is banned by FIFA.

The 61-year-old’s comments were debated on Saturday’s instalment of GB News, with Stephen asking: “Has he got no brains?”

His guest Nichi Hodgson said: “Gary believes he is in the position to encourage any gay players who will be playing in the World Cup who have not come out, to come out in Qatar which has the death penalty for homosexuality.”

She continued: “There has been so much controversy about having the World Cup there anyway because of gay rights issues, now he thinks as a straight man it is okay to encourage other people who might feel very worried about their careers and their livelihoods to come out.”

“It’s so tone-deaf,” the 39-year-old broadcaster fumed as she reflected on the former striker’s comments.

She claimed people might start to speculate about which players are gay and she branded Gary’s remarks “ill-considered” and “irresponsible”.

Nichi claimed Gary “is not looking at the realities of life for gay people” as she continued to deplore his comments.

Stephen interjected to tell GB News viewers nothing about Gary surprises him anymore.

GB News viewers flocked to Twitter to comment on the debate, with many agreeing with the hosts’ remarks.

Alison Cod said: “[He] literally hasn’t got a clue, has he?”

Sean added: “Qatar punishes same-sex relationships with imprisonment. (Maximum sentence is the death penalty) Gary Lineker is stupid to even suggest this.”

@ArseneJenga added: “Does @GaryLineker know what they do to gay men in Qatar? What a moronic dangerous statement.”

Lesley Hall remarked: “The World Cup not taking place in Qatar would have sent a message.”

@Queensccross15 said: “Lineker proving yet again why no one really likes him. Besides, why should gay players come out?

“I thought given the society we live in, a gay man is a common-place, so why the need to announce it? If the other players can’t accept them, that’s their problem.”