Welcome to the Season 8, episode 3 recap of HBO’s Game of Thrones — where the battle is mighty and my nerves are jangled.

Where do I even start?

Seriously, this episode was unlike anything I have ever witnessed before. If you want a TL;DR it is simply that you must put down everything you are doing right now.

However, that might not be possible, so let’s get started on how Episode 3 of Game of Thrones Season 8 went down. 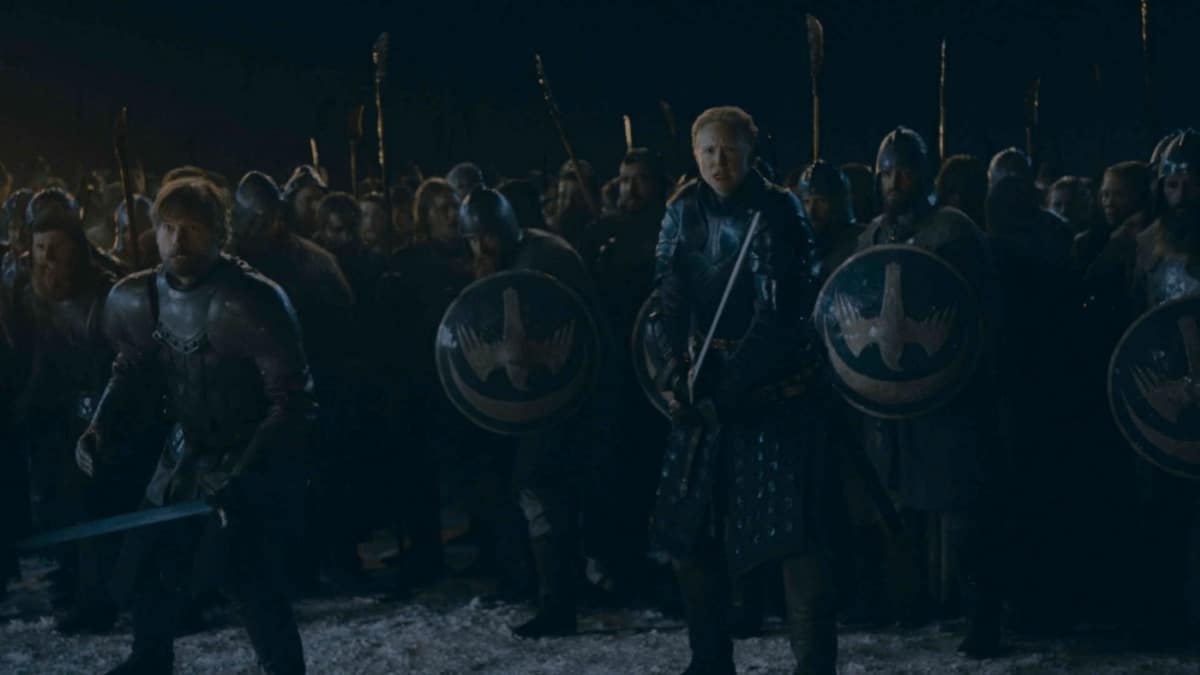 The Red Witch turns up

Even though they have had less than a day to prepare for the dead army, a pretty good plan has been put in place. The Dothraki and the Unsullied are positioned outside.

The women and children and other assembled humans that can’t fight, plus Tyrion (Peter Dinklage), are down in those crypts that everyone thinks is the safe place.

Just as everyone is waiting for the wights to attack, Melisandre (Carice van Houten) turns up and does her magic in order to give the Dothraki a chance by lighting up their weapons — which means that we can finally see what is going on in an episode that is pretty dark literally as well as metaphorically.

This means that the Dothraki lasts five minutes instead of two against the dead army. 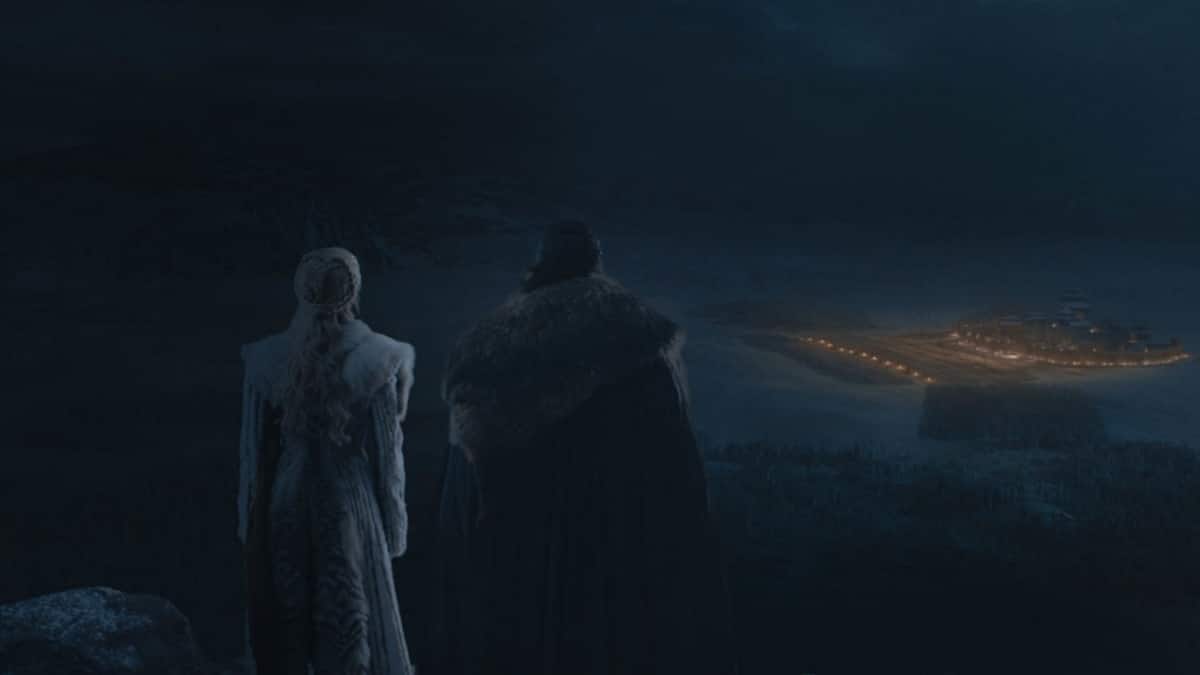 Jon Snow (Kit Harington) and Daenerys Targaryen (Emilia Clarke) are chilling on the hills surrounding Winterfell, watching, waiting and totally not talking about their familial ties or the iron throne.

Dany must be kind of okay with it, though, as Jon gets to ride one of her dragons when the dead army gets too close.

Although, to be honest, at this point in the game everything is so dark, it could have been Daenerys and the Night King (Vladimir Furdik) playing dragon tag in the sky because I am pretty much squinting at the screen wondering what the AF is going on.

I mean, who decided that the nighttime would be the ideal time for the most epic battle ever on Game of Thrones?

The battle gets epic

While the Dothraki falls pretty quickly to the dead army, the Unsullied survive for much longer. It is their job to protect Winterfell in Episode 3 of Game of Thrones Season 8. They will allow people to enter and to leave.

This is a good thing when everyone realizes that sh*t escalated quickly and they need to light the trench. Melisandre exits and has to do her magic to get the trench alight.

Except she is totally getting distracted by the wights around her and I am screaming at the screen to get the f*ck on with the task at hand.

She then manages to light the trench and I don’t end up having the mini heart attack I thought I was going to.

Arya sends Sansa down to the crypt

As the battle of Winterfell continues in Episode 3 of Game of Thrones Season 8, it becomes pretty apparent that the sh*t is hitting the fan.

Arya Stark (Maisie Williams) sends her sister, Sansa (Sophie Turner) down into the Winterfell crypt. Once again, while the plan to keep the dead army out was pretty well thought out, no one really thought about how the crypt is filled with dead Starks — Not Jon. Not Arya. Not Sansa. Not even Tyrion Lannister.

So, you know it’s coming.

In the meantime, though, Sansa and Tyrion have a bit of chat about their marriage and manage to p*ss off Missandei (Nathalie Emmanuel).

Above deck and across in the Weirwood

Bran (Isaac Hempstead Wright) is chilling in the Weirwood and telling Theon Greyjoy (Alfie Allen) that everything is okay and I am wondering why anyone is actually apologizing to Bran any more.

Maybe someone should just get him a T-shirt that reads “All is forgiven to get to you this point in time” and be done with it.

But, then it is time for Bran to time out and Theon has to protect him while he is warging into the ravens, and checking out everything from the sky.

Arya gets finally gets to use her training

As Maisie Williams told Entertainment Weekly, Arya has managed to miss every battle so far in Game of Thrones. Which is weird, because she has totally been training the entire time since her dad got her fighting lessons in Season 1.

This means that she is a relative unknown heading into Episode 3. Will she balk under pressure? Will she succeed?

Mostly, she just fights for her life. The Hound (Rory McCann) and Beric Dondarrion (Richard Dormer) help out occasionally. However, her journey gets interesting once she bumps into Melisandre and the witch reminds her of a quote made by her original fighting instructor.

Melisandre: “What do we tell death?”

She then totally runs off on some side mission that viewers don’t know about until the very end.

Once the smoke settles, though, the Night King smiles out at Daenerys and we now know the answer to last week’s question of whether or not dragon fire is effective on him.

Jon and Daenerys end up fighting on the ground

Jon hits the ground running but Daenerys is making bowls of brown as the wights approach. She may be Daenerys of the House Targaryen, the First of Her Name, The Unburnt, Queen of the Andals, the Rhoynar and the First Men, Queen of Meereen, Khaleesi of the Great Grass Sea, Protector of the Realm, Lady Regent of the Seven Kingdoms, Breaker of Chains and Mother of Dragons but there is no spot in that title that states she can fight.

So, it’s lucky that Ser Jorah (Iain Glen) turns up to defend her. It’s a shame he has to die in the process, though, because I totally think Daenerys would have taken him out of the friend zone for a night or two in payment for his services.

As Bran wargs out in the Weirwood, the Night King is approaching and Jon sees his chance to attack. Running towards him, Jon is confident.

But, then the audience can see the Night King’s face and you totally know he knows Jon is behind him.

So he raises the dead and Jon is f*cked.

If anyone was wondering how close the Night King has to be to Winterfell in order to raise the dead Starks in the crypt, the correct answer is outside the Weirwood.

However, the defense of the defenseless is overshadowed by the fact that Bran is still warging and the Night King is.

Oh, there we go, Bran is back and totally not doing anything and I am throwing things at my TV at this stage until I wonder if maybe Arya ran off earlier because she had to borrow her brother’s face and now I am cheering and hoping this theory is correct.

Instead, Arya runs up behind and pounces on the Night King.

Once again, he is anticipating this and he grabs her around the neck and I am crying and then screaming and, finally, cheering because Arya drops her knife only to grab it in the other hand and stab the Night King right in the motherf*cking guts.

We were all expecting it. And, to be honest, I am surprised the list isn’t much longer. 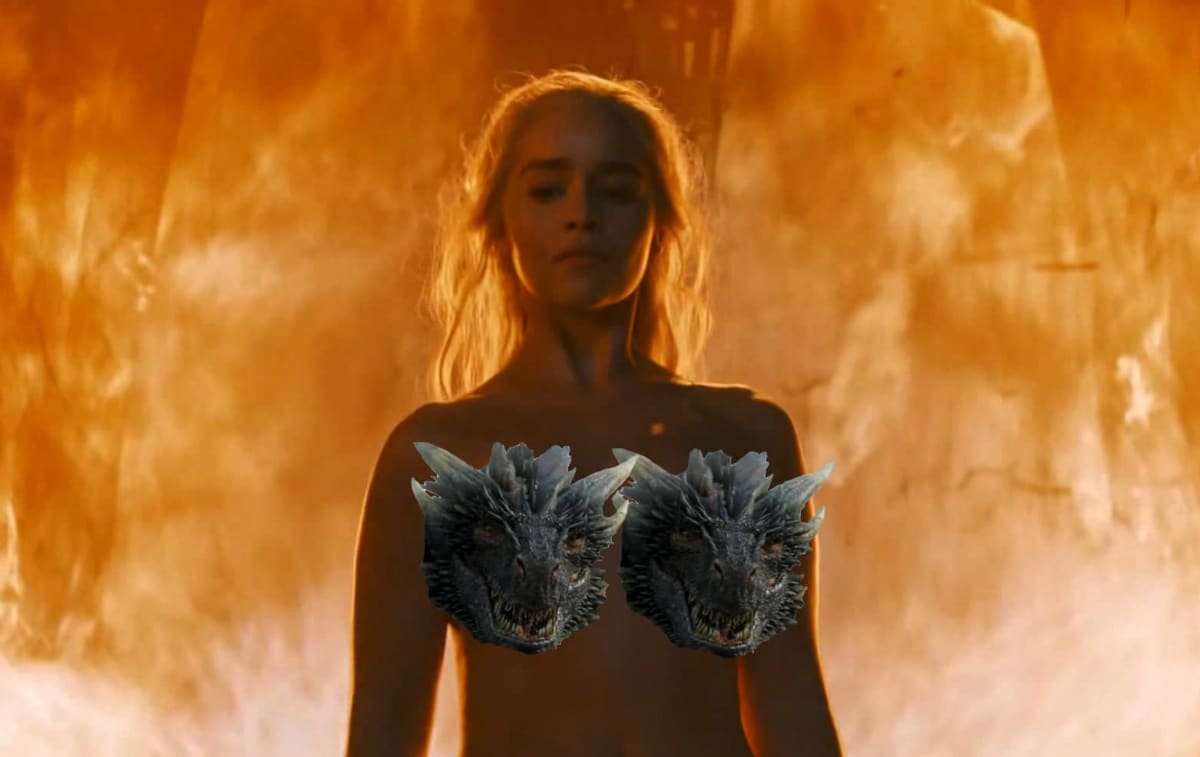 5 out of 5 for dragons. Everywhere you turned there seemed to be a dragon, be it living or dead. There were clashes in the air, clashes on the ground. Plus, Jon got to battle from dragon-back as well. It actually probably doesn’t get any better than this.

Game of Thrones Season 8 returns with Episode 4 on Sunday, May 4 at 9/8c on HBO.