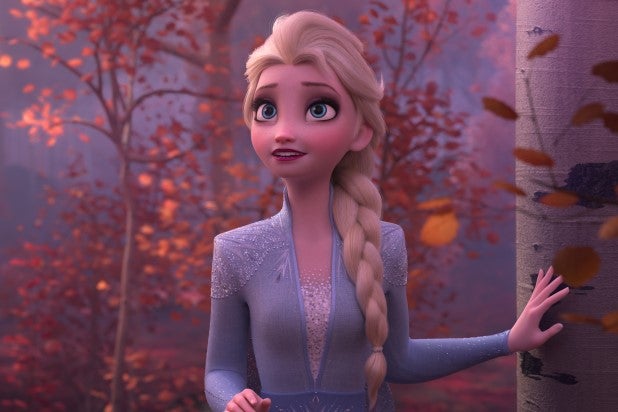 On a weekend that is traditionally a slower period before the holiday releases arrive, Disney’s “Frozen II” joined “Glass” and “Avengers: Endgame” as the third 2019 film to top the box office charts for three weekends. The animated film took in $34.5 million this weekend to bring its domestic total to $335 million.

With no major releases this weekend, the two new additions to movie theater marquees were Focus Features’ “Dark Waters” and STX’s “Playmobil: The Movie.” “Dark Waters” spent two weeks in a limited release run to build word of mouth, grossing $1.2 million in that span. This weekend, the socially conscious drama expanded to 2,011 theaters and grossed $4.1 million for a $5.3 million total.

“Playmobil,” meanwhile, has been left behind by families who are still going to see “Frozen II.” The new animated release has opened to a mere $811,000 from 2,337 screens, giving it a per screen average of just $347. That ranks among the top 5 worst ever openings for a wide release on more than 2,000 screens.

However, STX won’t be taking a big writedown on this movie, as it was a distribution-only release for them with a $3 million marketing spend focused mainly on in-theater advertising. Grosses were also weighed down by STX’s agreement with movie theater companies to experiment with a variable pricing model, an idea that has been thrown around by analysts and theater owners as a way to increase interest in lesser known movies by offering tickets for them at lower prices. Tickets for “Playmobil” were available in many markets for as low as $5.

The rest of the top 5 this weekend was the same as Thanksgiving weekend, with Lionsgate/MRC/T-Street’s “Knives Out” taking second with a $14.1 million second weekend and a $63.5 million total after two weekends. Fox/Chernin’s “Ford v Ferrari” and Universal/Makeready’s “Queen & Slim” are tied for third with $6.5 million each, with “Ford” pushing its total to $91 million after four weekends while “Queen & Slim” has a total of $26.8 million after two weekends. Sony/TriStar’s “A Beautiful Day in the Neighborhood” completes the top 5 with $5.2 million and a $43.1 million total after three weekends.