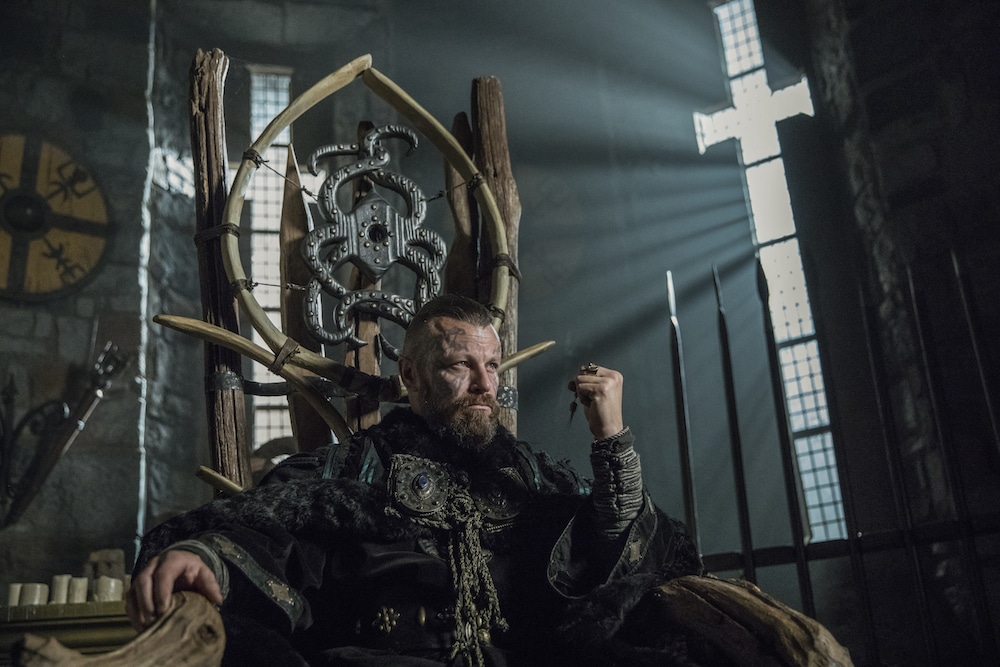 What an incredible Season 5B finale that was. Ivar was defeated, Bjorn is the reigning King of Kattegat, and Lagertha is alive and well. Ubbe put his life on the line for Danelaw, but also returned to Kattegat to be with his brothers.

Monsters and Critics spoke with Vikings creator and writer Michael Hirst, and while we could go on and on about the Lothbrok family, instead, we spoke to him about three supporting characters and their impact on Season 5B and the entire series.

For at least one of them, it was the end, but King Harald Finehair (Peter Franzen), Floki (Gustaf Skarsgard), and Judith (Jennie Jacques) are integral characters in Vikings’ ensemble cast and had incredible arcs this past year.

Monsters and Critics:  Let’s start with an interesting place. I find your writing of King Harald Finehair, one of the great Vikings in history, just fascinating. You positioned him as an adversary for the Lothbroks and, slowly, he has endured and endeared himself to audiences, eventually becoming an ally of Bjorn’s.

Michael Hirst: He kind of snuck up on me, on the blind side. I was looking for various characters at one point, came across Harald Finehair and was intrigued. We cast Peter Franzen in the role, he inhabited the role so well, but secondly, the role has become indispensable. Earlier seasons I had planned to kill him off, but I couldn’t because he was so strong. He gave me something else.

For a start, he’s a survivor. He always survives, he’s dealt with Ivar, because he’s brave, he’s also one of the few Vikings who gave me humor, he’s quite witty so he’s become my go-to-guy. If there’s some sort of puzzle that everyone is in, first of all he increases the puzzle and then solves it. He unravels it.

He’s become more and more of a player. He’s been in my eye line the whole time. I keep wanting to bring him back to see what he brings and I’ve just grown to love him. I could never kill him off. Yet, in Season 6, the eternal survivor doesn’t survive in the end and… yet he does.

M&C: What I found interesting was that Harald’s pursuit of women often leads his path, and he is this running tragic story of love when ironically he is said to have many wives and children.

Michael Hirst: The first story about him was out of love, he was in love with the kingdom of Norway. He wasn’t anyone’s interest but he proposed to a girl who’d say that she’d only marry Harald if he became the kind of Norway, which was a ridiculous thing.

That became the motivation. He wanted to prove himself to a girl and that became a leap for me, and I like contrast, as compared to what other Vikings wanted. He looks like the kind of guy who would be a romantic character.

So whenever it came to the desires of a woman, there’s always going to be an obstruction. Bjorn’s going to get to her first, or he’s going to be betrayed again. It was a character-driven thing, because the character was speaking to me, ‘I’m never successful with women.’

Harald Finehair is one of them who was always telling me what he wanted to do — I love him. When you love a character, he gets a lot of freedom from the writer.  He’s not in the front line of people, but I’m glad you picked him up. Very few people have but he’s at the soul of my drama. 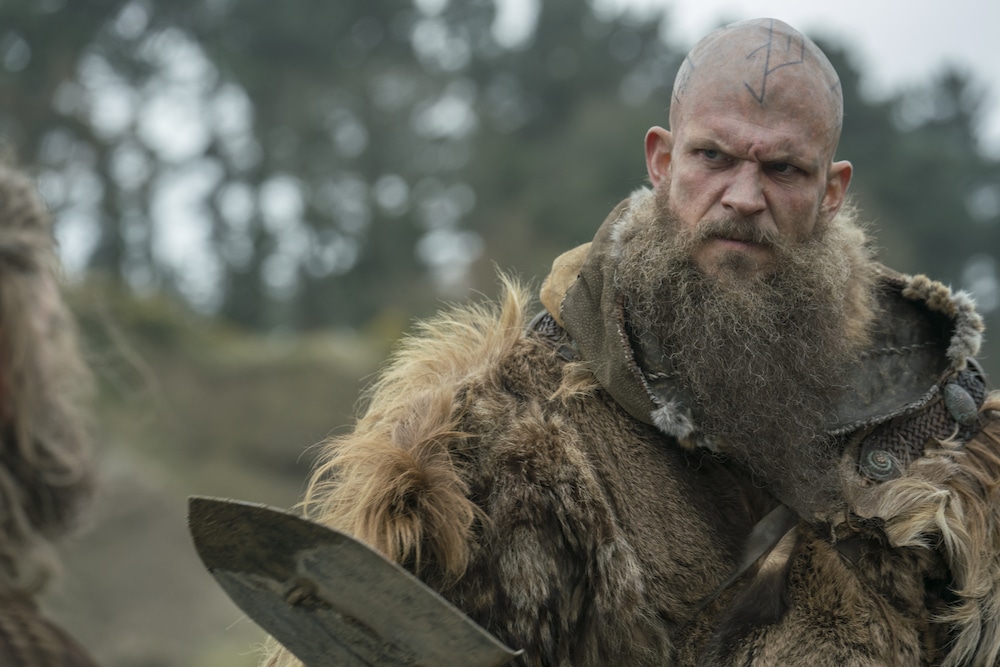 M&C: Another storyline that I have endeared myself to is Floki and the Iceland settlement. After a bloody family feud, Floki said that he’s given up on humanity and, surprisingly, though not given what transpired, lost his faith and his way.

Michael Hirst: Floki’s doing what a lot of idealists have done and tried to create a perfect society. We know that in Genesis, man is fallible. When Floki witnesses the massive murder of the family, you can’t change their course. I always believed in the storyline and Floki’s disenchantment in life. His life seems to come to an end when there’s no hope.

M&C: His descent into “Hel” is an interesting bit of information given to the viewer, because Iceland was first settled by Irish hermits. What a fascinating scene, could you share what happened there?

Michael Hirst: Yes! They did. I didn’t see it myself because I wasn’t in Ireland the whole time, which is where they shot this particular scene — we shoot in Iceland too — but for this they found a cave, an amazing one, in Ireland that was like a mile underground or something incredible.

Typical of the crew, they were going to put a camera on a track into the cave, but it was almost impossible to get (the track) after a about half a mile down. Everyone who was there, the actors, the crew, the cooks, etc. had to carry everything into the cave in Ireland.

What’s important about that is that Vikings is real. A lot of this stuff you see on television is CGI. Not on Vikings. People actually did that, just like the fight scenes. Gustaf and the entire crew went into this cave. 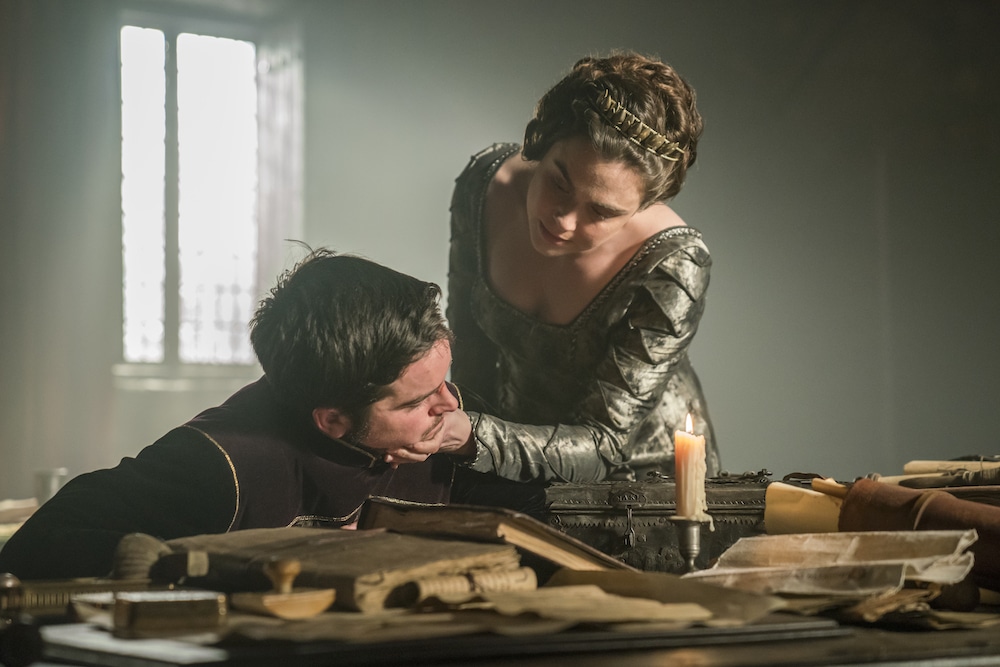 M&C: Finally, I’d like to move to Wessex, which was hit incredibly hard with casualties like Heahmund, Aethelred and perhaps one of the most important characters on the series, Judith, played by the incredible Jennie Jacques. She’s been an anchor of the Wessex storyline with her relationships with Athelstan to King Ecbert, to Aethelwulf, then to her maternal connections with Aethelred, and Alfred.  She is just one of the powerful stories in Vikings and she finally met her time.

Michael Hirst: Well it’s true, and again you’ve picked up on something that’s very close to my heart. It began as a character who was out of my attention, to becoming someone who was tugging at my sleeve, asking, what about me? What am I doing here? What’s my role?

I put a lot of emotion on Jennie’s shoulders. It was a very emotional role. No more so, obviously, than in the killing of one of her sons, and explaining to Alfred what it means now for him to be king.

It has more impact having her do it than another man telling a young king how to act. To have a woman, his mother, tell him that, and that she killed Aethelred for him, is brutal. You’re right, Judith (and Jennie) is very unsung, she’s been in this role for a long time.

Her relationship with Ecbert is extraordinary, I loved writing that, her attitude about it was fantastic. It was very naughty, and it wasn’t Christian. Jennie sells it. It’s totally believable. I remember discussing it with Jennie and she has very strong opinions but she delivered big time, the emotional stuff.

I don’t worry too much about melodrama in my writing but I wasn’t expecting how much of that emotion she would give me, which made the scenes better. She gave me that, she gave me huge emotions.

When Judith is there in the room painting with Lagertha and King Alfred’s wife, talking about colors, and tells everyone that she’s dying. Do you recall that?

M&C: That’s one of my favorite scenes, to hear three women talking about art is something beautiful in the middle of this Viking chaos. 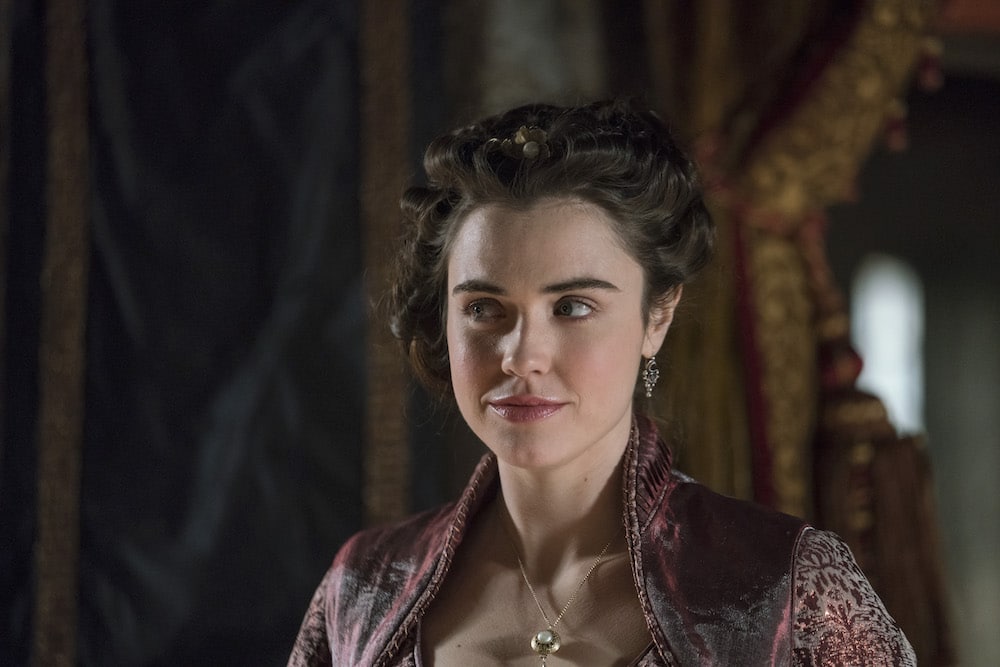 Michael Hirst: It’s fantastic, isn’t it? It’s not narrative, but it’s beautiful. You see her soul in that, that wonderful soul… Yeah, I couldn’t wait to write scenes for Judith because Jennie would always give me things I wasn’t expecting, something really deep, from the emotional side.

What did you think of the Season 5B finale? We’ll be breaking the episode “Ragnarok” down later today but let us know what you think of any or all of these three supporting characters of Vikings. Are any of them your favorites?