Gowdy worries internal spats, like the one between Mitch McConnell and Marjorie Taylor Greene, will hurt Republican chances to retake power 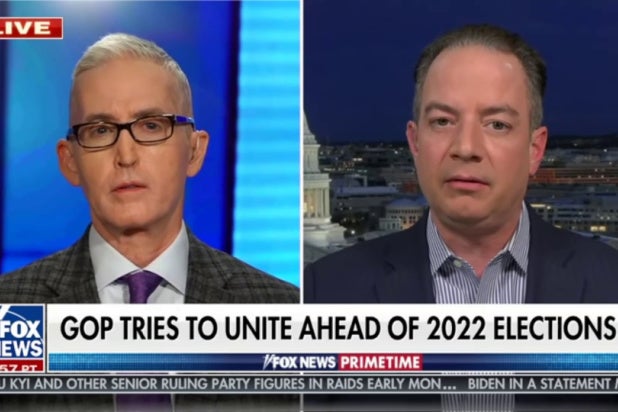 Former Republican congressman Trey Gowdy is hosting “Fox News Primetime” all week, and during the final segment of the show on Monday night he expressed a key concern for Republicans in this post-Trump world: that internal battles among Republicans in government could derail any hopes the party has of reclaiming Congress in 2022 or the presidency in 2024.

Though Gowdy didn’t specify any examples of the sort of GOP infighting he was referring to, the segment came less than an hour after Republican Senate Minority Leader Mitch McConnell slammed Qanon superfan Rep. Marjorie Taylor Greene in a very thinly veiled statement.

“Somebody who’s suggested that perhaps no airplane hit the Pentagon on 9/11, that horrifying school shootings were pre-staged, and that the Clintons crashed JFK Jr.’s airplane is not living in reality,” McConnell said in the statement. He also said that people who hold those views — which includes Greene, who he did not name — are a “cancer for the Republican Party.”

Gowdy: “Republicans are going through a bit of an identity crisis following the 2020 election. RNC chairwoman Ronna McDaniel calls on members to cut it out and quit bickering amongst each other, warning that intra-party feuding could cost for Republicans a shot at taking back the House and the Senate in 2022. And nobody knows Republican politics better than my next guest, former RNC chairman Reince Priebus. Reince, the Senate map looks daunting. The House map actually looks maybe doable. What’s your position on the map and where would you defend and where would you prosecute?”

Priebus: “Well, thanks for having me, Trey. You’re a hundred percent right, the Senate map is tough. First of all, you have an open seat in Arizona — not an open seat, you’ve got a challenge race in Arizona. You have a challenge race in Georgia. Obviously you have to really hone in on candidate recruitment there in order to pull that off. So you really focus on candidate recruitment. But then you’ve got open seats because you’ve got retirements in Republican statesm like Ohio, North Carolina Pennsylvania.

“Then after that, you’ve got Republicans like Ron Johnson in tough states like Wisconsin. So you have to defend all of that, maybe try to pick off a couple states if you can, and the map gets a little worse after that actually for the Senate. You’re right about the House. We should be able to win the majority in the House.

“But you’re right — in order to do that we’ve got to come together, have a real message based on real ideas about what we believe and what they believe, and make it a choice between ideas of two parties, not personalities and who belongs in the room and who shouldn’t be in the room and why these people don’t belong. That type of approach is never going to win. It has to be about what we believe.”

Gowdy: “Well, let me quote two people, Reince, and agree with you. Lincoln and Jesus both said a house divided cannot stand. I think they’re both right, and Republicans would do well to be a little more unified or at least squabble in secret, wouldn’t we?”

Priebus: “Well, you’re right but, Trey, also it goes back to the basics. Everyone has to just think about where we’re at. This is not Italy. We don’t have 12 different political parties where everyone can fit neatly into a box with their own particular group of people. We have a two-party system.

“We have a Republican and Democrat door that we can all walk through. 75 million people walked into the big hotel banquet, said Republican, we all walked in. But everyone in that room doesn’t agree with each other. And we don’t have the really the luxury of telling people to get out of that room. So how do you build a party by adding and multiplying, and not subtracting and dividing?

“It all goes back to redefining or, excuse me, reiterating what we believe in. Trey, we grew up in a political party system. You remember, I looked online, there’s about a thousand of these websites that say ‘I’m a Republican because.” And it lists very neatly what it is that we believe in as a Republican party. The party’s got to go back to basics and talk about the things that bring us together and then go prosecute our case and bring it to all those swing districts across the country and go and win an election by talking about ideas not people.”

You can watch this exchange between Gowdy and Priebus in the video embedded up at the top of this article.