What if the most annoying couple you knew in high school staged their own vapid mashup of “Ghost” and “What Dreams May Come”? Such is the question posed by Scott Speer’s “Endless” — and hopefully, no one else ever — a teen-centric interrogation of the possibility of life after death. Riley (Alexandra Shipp) and Chris (Nicholas Hamilton) don’t make much sense on paper, but the recent high school graduates are deeply in love, a point driven home during the film’s voiceover-heavy opening sequence, in which Riley expounds on their differences (she loves art! he likes motorcycles!) that somehow make them stronger.

Soon, however, they are torn apart, though not in the way Georgetown-bound Riley expects. Riley’s parents don’t dig Chris (again, that motorcycle), and his panache for hauling off their just-graduated high schooler to college parties thrown by their friends (also recently graduated!) isn’t helping matters. (Note: None of the timing in the film makes sense, and is best viewed as an accidental meditation on the intractability of time in the spiritual realm.)

Tragedy strikes, and Chris — a sweet boy, but one defined entirely by his choice of vehicular transportation and leather jacket to match — is killed in a terrible accident. Riley is plunged into despair. Chris can’t be gone, she cries. And she’s right: Ghost Chris is trapped on Earth, unable to either interact with the people he loves or to move into the next stage of existence.

High-concept, big-emotion love stories are certainly well-suited for the teenage set. All those raging hormones and a hardwired sense of disaffection are primed for over-the-top romance (it’s why “Romeo and Juliet” has endured for 423 years and counting), but Speer’s convoluted “Endless” does little with either feelings or with big ideas. Single-season CW shows offer more style than this flat film (strange from a former music video director who has a slew of vibrant works under his belt, including the Miami-set “Step Up Revolution”). Still, even at a slim 95 minutes, “Endless” grinds on endlessly. 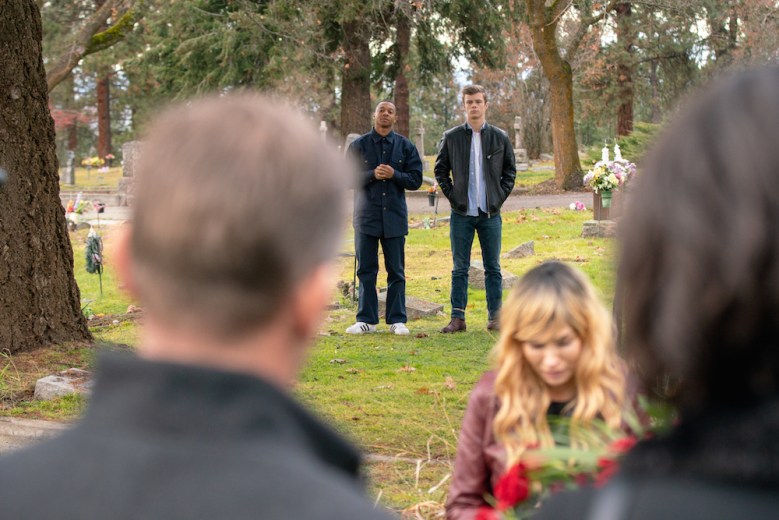 The film flips between the two realities: Chris’ strange new existence, occasionally spent with an also-dead new pal (DeRon Horton, the sole character allowed an element of personality and charm) who tries to explain ghost-world rules, and Riley’s shattered life. “Endless” slowly works up to its big idea: What if Riley and Chris could reach out and still (sort of) touch each other?

Through a baffling combination of schemes, the lovers are able to interact again: They utilize an affectionate call-and-response bit that the pair loved (hammily delivered in its first occurrence, so you know it will be important later) and Riley literally draws Chris into being in places that were key to their relationship. It’s like “Ghost,” but without the chemistry, the comedic stylings of Whoopi Goldberg, or an engaging central mystery.

This leaves the viewer with a central question: If Speer and the film’s writers, Andre Case and Oneil Sharma, wanted to ape “Ghost,” why do it so poorly? “Endless” even includes its own version of the clay-spinning “Unchained Melody” scene in (which, point of fact, happens when Patrick Swayze’s character is still alive); here, it’s centered on a very dead Chris and a very ailing Riley, sexily making food together (ghosts eat?).

Nestled deep in the recesses of “Endless,” there is an emotional truth: Beyond Riley and Chris’ otherworldly connection, Riley has been abandoned in her hour of need. Chris’ mom (Famke Janssen, nearly unrecognizable beneath hair extensions) assigns some blame to the grieving Riley and isn’t interested in helping the girl move past her pain. That hurdle is believable, but we also have Riley’s parents, who are only interested in untangling the legal ramifications of the accident (clearly a red herring from the start), while her best friend Julia (Zoë Belkin) and her rockin’ social life never miss a beat (“Let’s go out for sushi tomorrow night!,” Julia screams, as her BFF further crumbles before her eyes).

Perhaps “Endless” is really a horror story about grief, and how terribly things can go when people aren’t supported during dark times. Speer’s film may play Chris’ condition as something factual (yes, he’s really a ghost), but the murkier implications of Riley’s experience are much more compelling. As “Endless” limps toward a tidy ending, never willing to wrestle with anything as big as love and life and what happens after, those possibilities are snuffed out in favor of cheap epherma. Nothing, it seems, can really last, least of all a good love story.

Quiver Distribution will release “Endless” on VOD and in select theaters on Friday, August 14.