“Game of Thrones” and “Fleabag” were the big winners for their final seasons, but “Veep” went home empty-handed 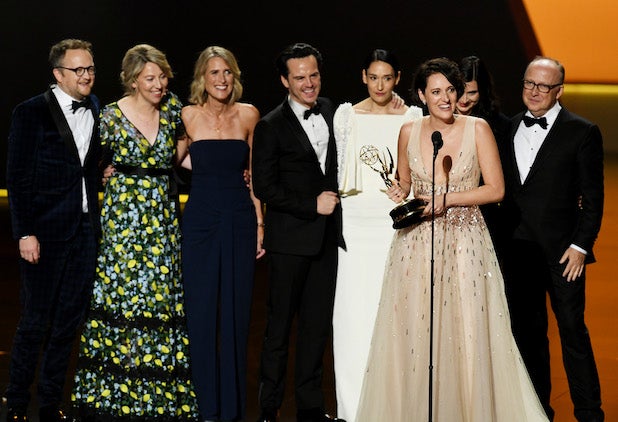 Emmy voters bid farewell to a pair of celebrated series with a batch of Emmys on Sunday night, but only one of the two was expected to get that kind of golden sendoff.

Yes, “Game of Thrones” won two more awards to go with the 10 it got last week at the Creative Arts Emmys, tying its own record for most Emmys in a single year for any series. Yes, it was named Outstanding Drama Series for the fourth time, putting it in a five-way tie for the most wins in the category with “Hill Street Blues,” “L.A. Law,” “Mad Men” and “The West Wing.”

Yes, it extended its record as the winningest drama or comedy series of all time. Yes, Peter Dinklage won his fourth Outstanding Supporting Actor in a Drama Series Emmy, the most wins ever in the category.

And yes, it might have won another award or two if it hadn’t had four of the six nominees in the Outstanding Supporting Actress in a Drama Series category and three of the seven for Outstanding Directing in a Drama Series. Perhaps it split the vote enough to allow two “Ozark” nominees, actress Julia Garner and director Jason Bateman, to win those Emmys instead.

But on the comedy side, Emmy voters decided that three consecutive wins were enough for HBO’s other longtime Emmy magnet, “Veep.”

Instead of the show winning top awards in its seventh and final season, and its star Julia Louis-Dreyfus breaking a tie with Cloris Leachman to become the most-honored performer ever, Phoebe Waller-Bridge’s Amazon series “Fleabag” snuck in and won the Outstanding Comedy Series prize, along with additional awards for writing, directing and for its star.

Waller-Bridge’s victory over Louis-Dreyfus was the night’s biggest shock, coming 45 minutes into the show and setting up the all-but-inevitable crowning of “Fleabag” as the year’s best comedy series two hours later.

Even with the extra boost of coming back after Louis-Dreyfus took a hiatus for breast cancer treatment, Emmy voters drifted away from the formerly unstoppable “Veep” during its one-year absence. Despite praise for the final “Veep” season, the Television Academy turned to the second and last season of the year’s hottest comedy series, “Fleabag,” which wasn’t nominated for anything in its first season.

It doesn’t hurt that no show was easier to binge than “Fleabag.” Its second season began picking up wildly positive word of mouth in the spring, just as Emmy season was heating up – and when that happened, voters had no problem watching the entire season, which consisted of only six 30-minute episodes.

In the limited series and movie categories, “Chernobyl” got off to a great start with seven awards at the Creative Arts Emmys on Sept. 15 and then moved into double digits at the Primetime Emmys ceremony, losing in the acting categories to Jharell Jerome from “When They See Us,” Patricia Arquette for “The Act” and Ben Whishaw for “A Very English Scandal” but winning for its writing and directing and for Outstanding Limited Series.

Overall, the Emmys suggested that next year’s show is going to be wide open and fiercely competitive, with “Game of Thrones” and “Fleabag” out of the running.

In comedy, last year’s winner “The Marvelous Mrs. Maisel” now seems vulnerable (though voters in the acting categories still love it), while “Barry” won two Emmys last week and one more on Sunday.

In the drama categories, 2020 should be a free-for-all, with “Killing Eve,” “Ozark” and “Succession” all showing real signs of strength, “The Handmaid’s Tale” coming back after not being eligible for series awards this year and “Pose” winning one of the most enthusiastically received awards of the night, for lead actor Billy Porter.

Porter’s win also helped leaven what had been a procession of mostly white (and quite British) winners, though it’s hard to quarrel too much with voters who gave two awards to African-American actors, Porter and Jharell Jerome; two gay actors, Porter and Whishaw; one to Dinklage, who spoke onstage about how lucky he was to be in a community committed to diversity and inclusion; and one to Patricia Arquette, who spoke passionately about transgender rights in the wake of the death of her sister Alexis.

Goodbye, “Game of Thrones.” Goodbye, “Fleabag.” Goodbye, “Veep.” The Academy will miss you all when they sit down to cast their ballots next year.