“They understood that when you put value into a person, it empowers that person to get in touch with their inherent value,” actress said on stage 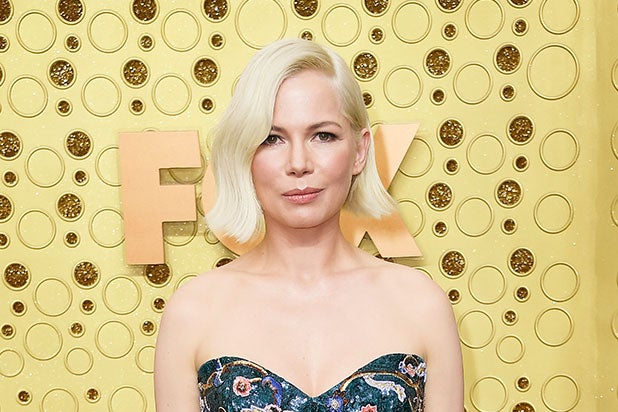 Following her win in Lead Actress in a Limited Series for her performance in FX’s “Fosse/Verdon,” Michelle Williams thanked her “bosses” at FX and the Fox 21 TV studio for paying her equally with co-star Sam Rockwell and listening to her when she expressed her needs to play actress-dancer Gwen Verdon.

“I see this as an acknowledgement of what is possible when a woman is trusted to discern her own needs,  feel safe enough to voice them, and respected enough that they’ll be heard,” Williams said following her win, before listing off some of the things she required during production of the FX show about Verdon’s professional and personal relationship with director-choreographer Bob Fosse.

“All of these things, they require effort and cost more money but my bosses never presumed to know better than I did about what I needed in order to do my job and honor Gwen Verdon,” she added.

She then thanked FX and Fox 21 Studios for ” supporting me completely and for paying me equally, because they understood that when you put value into a person, it empowers that person to get in touch with their own inherent value, and then where do they put that value? They put it into their work.”

“The next time a woman, and especially a woman of color, who makes 52 cents on the dollar compared to her white male counterpart, tells you what she needs in order to do her job, listen to her, believe her, ” she concluded, “because one day, she might stand in front of you and say thank you for allowing her to succeed because of her workplace environment and not in spite of it.”

Williams has been at the center of pay equity issues since her involvement in the movie “All the Money in the World,” which required reshoots after co-star Kevin Spacey faced sexual misconduct accusations and was replaced by Christopher Plummer. While co-star Mark Wahlberg was paid $1.5 million for the reshoots, Williams earned less than $1,000 for the exact same amount of work.

Advocating for the Paycheck Fairness Act while speaking on Capitol Hill in April, Williams said the disparity came as no surprise to her.

“It simply reinforced my life-learned belief that equality is not an inalienable right and that women would always be working just as hard for less money while shouldering more responsibility at home,” she said. “I’ve been accredited by my industry at the highest levels and that still didn’t translate to equal and fair compensation.” (Wahlberg donated the money he received for the reshoots in Williams’ name to #TimesUp, the legal defense fund founded in response to the #MeToo movement.)