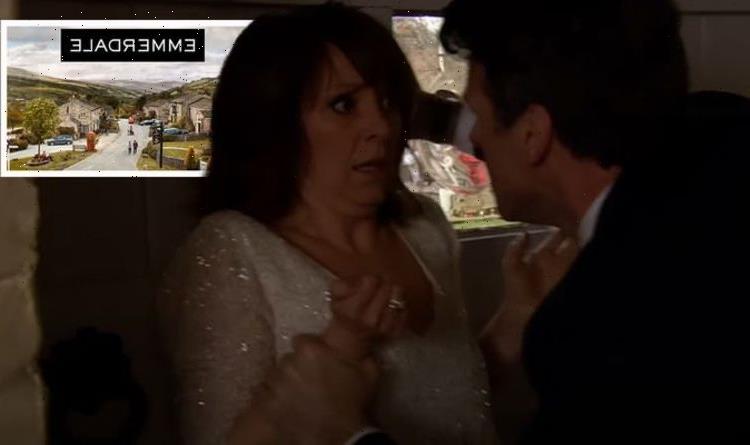 Plane crashes, illness diagnoses and character deaths make up some of the most talked about moments that Emmerdale viewers have witnessed over the years. More than 8,000 episodes of the TV soap have made it onto our screens – but what are thought to be the most shocking scenes in the show’s history? Here, Express.co.uk discuss what are arguably Emmerdale’s top five most shocking moments ever.

Emmerdale is a TV soap broadcast on ITV, that was first aired in October 1972.

The show is set in the fictional Yorkshire Dales village of Emmerdale – which until 1994 was previously known as Beckindale.

Over nearly 50 years, Emmerdale has followed the story lines of what have become some of the most well-known families on British TV, such as the Dingle and Sugden families.

Looking back on its history the show has produced many memorable scenes, but just what are regarded as the biggest surprises it’s ever produced?

Below we take a look at Emmerdale’s top five most shocking moments.

Ashley Thomas (played by John Middleton) spent nearly 21 years in the soap, and his exit is arguably what he is remembered for the most.

Towards the end of his time in Emmerdale, Ashley was diagnosed with dementia which led to some incredibly emotional scenes for viewers. The most heart-breaking of which was when Ashley forgot who his wife Laurel (played by Charlotte Bellamy) was.

The story line itself was praised by campaign groups, such as the Alzheimer’s Society, who complimented the show for its impact that it had on carers and patients of the disease.

During scenes which aired in 2014, Val Pollard (played by Charlie Hardwick) – a married middle-aged woman – was diagnosed with HIV following a brief fling she had.

The story line was again praised by activists for raising awareness of the illness. However, the actress herself received online hate which exemplified the prejudice that to this day still exists around HIV.

Val remained a character within the show until she died in 2015.

One of the more controversial scenes in Emmerdale’s history was when Aaron Livesy (played by Danny Miller) helped his partner Jackson Walsh (played by Marc Silcock) die.

Jackson was tetraplegic which is a physical disability that leaves its patients being unable to move the upper and lower parts of their body.

Viewers watched in shock as Aaron emotionally helped to end Jackson’s life by drinking a lethal concoction of drugs.

Emmerdale was later criticised for the story line and consequently an Ofcom investigation was launched after several complaints were made.

Throughout 2017, viewers watched on in horror as Pierce Harris (played by Jonathan Wrather) manipulated and assaulted his partner Rhona Goskirk (played by Zoe Henry).

The relationship then took a horrific turn as Pierce horrifically raped Rhona on their wedding day.

Emmerdale again received complaints for the graphic nature of the scenes that were broadcast, but ultimately stood by its decision for airing the episode, claiming it complied with Ofcom’s vigorous guidelines.

The plane crash which took place in 1993 is regularly mentioned as Emmerdale’s most shocking moment ever, and is one of two aircraft accidents that have occurred in the show’s history.

Four characters were killed during the sequence of events that followed, and as a tribute, the village was renamed from Beckindale to Emmerdale.

Heavy criticism was directed at the show’s producers though, as the scenes were broadcast close to the fifth anniversary of the Lockerbie tragedy, which killed 259 people in 1988.