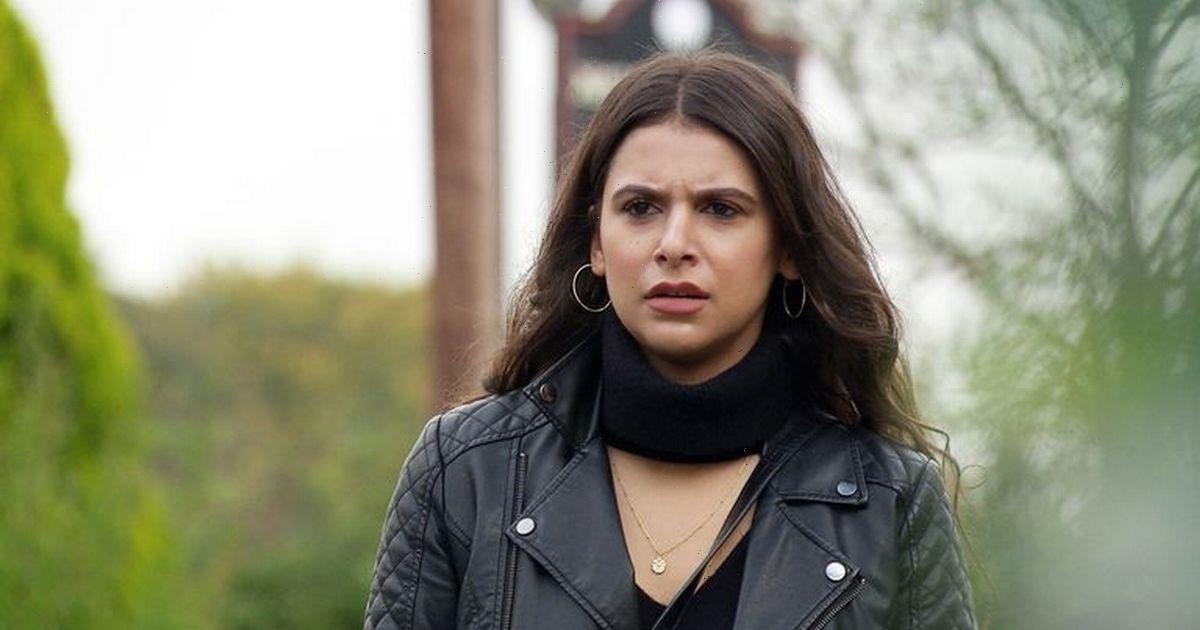 Currently behind bars, Meena has been pulling the strings from behind the scenes – attempting to frame her sister Manpreet for Andrea Tate’s death, and working on vicar Charles Anderson to get him on side.

And she left fans shocked when appearing in court and pleading guilty to one of the charges against her – though she continues to claim that she killed Ben Tucker in self defence.

But with Paige Sandhu confirming her exit from the ITV soap – and with nowhere else to run for the killer – fans are divided as to how she will finally leave the village.

And some reckon she’ll be back for the 50th anniversary later this year.

Some fans are certain that Meena is set to be killed off the soap herself someday soon – as they noticed a chilling clue that hints to extensive injuries.

In her prison scenes, Meena has been seen clutching her ribs and moving slowly, as well as groaning when she sits down.

After she was pushed off the humpback bridge by Liam – the same bridge that killed his daughter – it makes sense she could be suffering from internal injuries after falling on the jagged rocks.

Taking to social media, eagle-eyed fans declared: “I think Meena has internal injuries and could die in her cell.”

Someone else pointed out: “Who thinks Meena is going to die from internal bleeding? She keeps heavy breathing and clutching her ribs."

As another fan guessed: “Meena will probably die of internal bleeding in prison!”

Others are certain Meena could be murdered by another prisoner, after one inmate was caught glaring at her while she used the phone.

But a quick death could mean Meena escapes justice for good – and she wouldn’t pay any real penance for her crimes.

Some viewers are sure that Meena’s last days could herald the return of a favourite character: one Graham Foster.

Though Graham was killed off in a battle with Pierce Harris – leaving Marlon to take the fall – fans think he could still be alive, as his funeral took place behind closed doors with only Kim Tate in attendance.

Someone bravely took to Twitter to share their theory, guessing: “Best outcome. Meena is in the courtroom. Graham didn’t die but was saved and the police protected him as he was undercover.

"He runs into courtroom and takes Meena off to work undercover as government assassins in a new TV show!"

Someone else followed up: “Emmerdale writers need a genius way of bringing Graham back from the dead and it desperately needs Mike Parr [Ross Barton] and Joe Tate's character back!”

It comes as fans have started a petition for Meena to get her very own spin-off show, launched on Change.org.

The webpage reads: “Many viewers of Emmerdale have felt that serial killer Meena Jutla has been the most interesting part of Emmerdale for a while now, and have expressed their wish for a spin-off series centred around her.

"Whether it could be set in a prison as she carries out her sentence and depicts her becoming top dog and potentially escaping, or whether she gets off with no charge and follows her arrival to another village where she begins killing again – fans of Meena NEED it!"

The statement added: “With the many dramas that ITV commission, it would be so interesting to see a spin-off of a soap, since it could include characters that we've already been introduced to and therefore follow their journey in more depth than a soap may allow to, with the potential of more brutal scenes (which we know Meena is capable of)!”

Meena could simply escape justice altogether – whether she stages an epic prison break or Manpreet takes the fall for her crimes.

Manpreet has been struggling with whether or not to testify at her sister’s trial, after Meena screamed at the prison guards: “Why can’t you see through her? Manpreet killed Andrea!”

And though it seems like Manpreet has a solid alibi for the day of Andrea’s death after falling from the rope bridge with Charles, Meena’s scheming could mean she goes down anyway.

Meanwhile, Paige Sandhu has teased a prison break plan for her character, telling Daily Star in January: “I think if she does see an opportunity of being able to get away then she will use it.

“Because of her confidence and arrogance she believes that she can outsmart anyone – so if she did get caught by the police then she would believe she could manipulate and worm herself out of situations – which she has done in the past many times with the police."

More still think Meena could be sent down temporarily, only to pop back up for Emmerdale’s 50th anniversary in October.

With the soap turning half a century, it is expected there will be some huge plots to celebrate – and with Meena being such a huge part of it in recent years, it could be a good move to bring her back.

Taking to Facebook, one viewer said: “Oh my god I just had a thought. Emmerdale is 50 years old this year in October, and we know soaps do a bit thing on big birthdays, so I'm thinking what if Meena is part of that 50th birthday celebrations that means she's there 'til October? Oh dear god how will we cope lol!”

A second fan suggested: “What if she goes, everyone thinks she's dead but she comes back in September/October to finish her revenge?"

Soap boss Jane Hudson has already confirmed there’s something big in the pipeline for the 50th anniversary, as plans have been ongoing for a decade.

She said: “I think we probably held back some of our big ideas while Covid was so prominent in our lives because we didn’t know what we could achieve. But Super Soap Week has really shown us what we can do.

"And as brilliant as stunts are – we’ve got to have the stories to back up those stunts. We can blow up anything but if there’s no story behind it – what’s the point?"

Meena has already murdered several villagers – beginning with Leanna Cavanagh and ending with Ben Tucker – along with kidnapping and trying to kill Manpreet and Vinny Dingle.

With at least four kills to her name, it wouldn’t be surprising if Meena managed to take another life before her eventual exit.

And Manpreet actress Rebecca Sarker has hinted that it could indeed happen, telling Metro: “I haven’t heard anything! But that’s the life of an actor, people come and go.”

She added: “You’ve got to be sensible about it. There was life before Meena and there will be life afterwards – I think.”