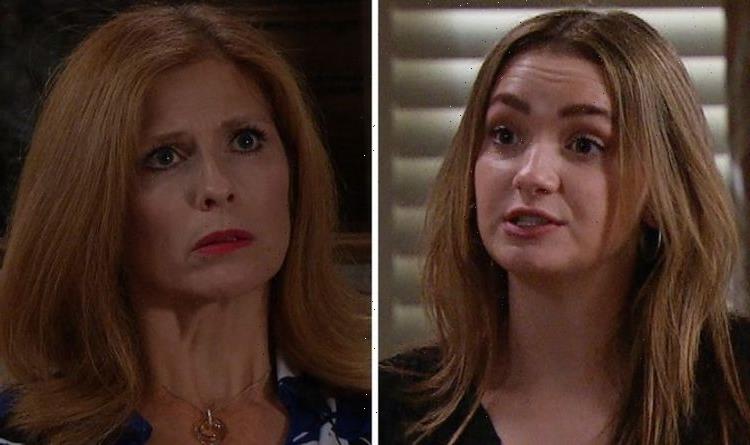 Emmerdale’s Gabby Thomas (played by Rosie Bentham) has recently given birth to a baby boy Thomas Tate after her boyfriend and father of the baby Jamie Tate (Alexander Lincoln), went missing. However, it seems she isn’t coping very well with her new role of motherhood and could possibly turn to alcohol as a coping mechanism – will this end with both of baby Thomas’ parents exiting his life?

In Monday’s episode, Gabby was seen asking Kim Tate (Claire King) if she could watch Thomas whilst she went to a party with her friends after she felt like she was missing out.

Tuesday night’s episode saw Bernice Blackstock (Samantha Giles) walk into Home Farm the morning after and asked if Gabby was awake yet, before tending to her grandson.

Kim shrugged off Bernice’s comment and simply told her: “Probably sleeping off a hangover.”

Later in the episode, Gabby finally rose from her sleep, to which Bernice teased: “Oh finally, turns out mummy hasn’t run off with the circus after all. Milky time.”

But before she could hand Thomas over, Gabby replied: “Well, I was thinking you could give him his bottle?

“I gave him formula at 2am this morning, and he wolfed it down, didn’t you clever clogs? Anyway, I’ve got plans.”

Shocked at her daughter’s lukewarm reception towards her son, Bernice quipped: “To feed your baby again, I hope?”

Feeling annoyed by her mother’s judgement, Gabby asked: “Is this some kind of guilt trip because I don’t get that from Kim?”

Kim had recently decided to leave Home Farm to focus on her business ventures, leaving Bernice to break the news to Gabby.

“Well, you won’t be for the foreseeable either, seeing as she’s swanned off turns out building empires is more important after all,” she told her daughter.

Seemingly not surprised at Kim’s disappearance, Gabby moaned: “So much for the extra help.”

Trying to give some advice to her daughter, Bernice explained: “Look, Gabby, you’re a new mum, and I understand how that feels.

“You’re suddenly robbed of your independence, trapped by a weeing wailing ball and chain,” to which Gabby interrupted: “Oh, thanks,” before leaving for the pub.

After ordering a glass of wine from landlady Chas Dingle (Lucy Pargeter), Gabby sat down with Vinny Dingle (Bradley Johnson) as she took advantage of her freedom.

Not before long, Bernice was blowing up Gabby’s phone with calls, but she ignored it and continued her lunch with Vinny.

Taking offence to her comment, Gabby replied: “Yeah, what are you saying, that I look rough?”.

Tracy immediately took her comments back and said: “Oh no, god no, but even if you did wouldn’t matter because there’s no pressure to look perfect.

“And it’s good you’ve got your mum, you know to share the load so you can unwind,” but Gabby once again took offence and blasted: “What skive off you mean?”

Feeling bad about upsetting Gabby, Tracy explained: “What? Oh no, I mean it’s good to hide away for a bit, do what you need to do, anything that helps you cope.”

“Like drinking?” Gabby pointed out, with Tracy feeling uncomfortable: “I’m just saying that when you’ve been through it yourself, you notice the signs.”

Gabby snapped: “Right, and what is this sign saying then aye, wino mother? Look, no offence but some of us can have a kid and not make a massive deal out about it.

“Just because you couldn’t be a mum doesn’t mean that I can’t,” leaving Tracy red-faced as she left the Woolpack.

Could Gabby be heading down a dark path of alcoholism as a way to cope without realising?

Could Tracy’s advice be her trying to reach out as she sees signs of postnatal depression?