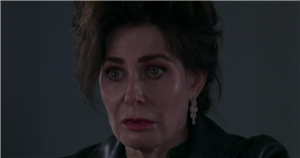 Emmerdale fans were left in tears on Tuesday's episode after Faith Dingle discovered that she was cancer free in emotional scenes.

Only recently in the village, Faith has been worried that her cancer has returned and was nervous ahead of getting her test results back.

On Tuesday, Faith was left nervous after the doctor finally called her and told her to come into the surgery urgently as the character prepared for bad news.

Manpreet told the character: "I know you're worried but there are no signs of malignancy. You're still in remission and cancer free."

Faith was left speechless over the news as she started crying while Manpreet continued: "The tests did show up something else though…"

Later in the episode, Faith told her daughter Chas Dingle the good news although added that she has rheumatoid arthritis.

She tearfully said: "I've just had the all clear, I could hardly believe it myself. I was all braced for game over and now it looks like I've dodged another bullet.

"I must be halfway through my ninth life by now, but by heck, am I going to make the most of it."

Faith added: "Oh, there's just one thing, it's not all good news. Doctor Sharma reckons I've got rheumatoid arthritis hence the pain and she's put me on tablets. I shouldn't be surprised, my mother was riddled with it."

However, at the end of the episode, Faith decided to keep the results a secret from Sarah and Cain.

Later this week, she is eventually forced to admit everything. Cain is furious that she lied to him and tells her that he just can’t trust her.

Viewers were left emotional over Tuesday's scenes as they took to Twitter to share their delight over Faith's good news.

One person said: "I’m so happy for Faith! #Emmerdale."

A different fan put: "Aw so happy for faith so glad she got the cancer all clear but yeah her not telling cain is gonna backfire #Emmerdale."

While a different account added: "Aww Faith is going to be ok… #Emmerdale."

Emmerdale continues on weeknights at 7pm on ITV.

For all your juicy Emmerdale updates, sign up to our daily OK! newsletter.