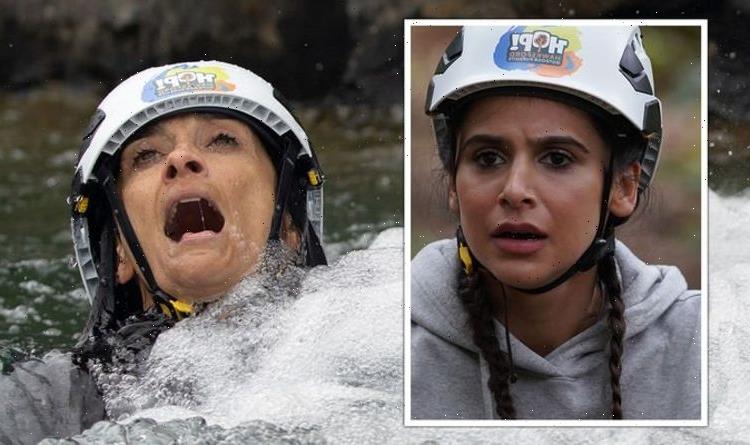 Emmerdale viewers have been suspicious of the villainous Meena Jutla (played by Paige Sandhu) ever since she got away with murder earlier this year. Fans of the ITV soap were left stunned back in July when Meena killed Leanna Cavanagh (Mimi Slinger) on her eighteenth birthday by pushing her off a bridge. Now, the evil nurse looks set to strike again, but could her murder plot go awry?

It’s already been revealed four spectacular stunts will take place in upcoming scenes on Emmerdale, with Meena triggering some of the events to kill Victoria.

But, could Meena’s sister Manpreet Sharma (Rebecca Sarker) get caught in the crossfires?

According to official soap spoilers, Meena’s attempt for revenge could soon end in disaster.

In the upcoming scenes, the villainous nurse wants Victoria Sugden (Isabel Hodgins) dead after learning her boyfriend David Metcalfe (Matthew Wolfenden) is in love with her.

As a result, she decides to kill love rival Victoria during an adventure break away.

However, she is left mortified when her plans to murder Victoria backfire, and leave her own sister Manpreet in serious peril.

But, she later watches on in horror as Manpreet takes Victoria’s harness instead.

Knowing full well her sister’s chosen the same harness she damaged, Meena fears the consequences of her dangerous actions.

Will Meena stop Manpreet before it’s too late? Or will she allow her sister to take the damaged harness?

If Meena doesn’t take action, Manpreet’s life could be put on the line. Will she survive?

The survival challenge begins with cries of enthusiasm as the survivalists jump into their rafts and set off down the river.

However, David, Victoria, Manpreet and Charles Anderson (Kevin Mathurin) soon find themselves fighting for their lives in the water.

Could more than one life be lost on this horrifying adventure break gone wrong?

Emmerdale fans have been sharing theories on Twitter, with several suspecting Manpreet could be at risk.

“I think Ethan or Manpreet will die. #Emmerdale,” @man18united commented.

@MisthiosGamer added: “I really hope Manpreet doesn’t die…. But yeah Ben could die, I think Andrea is also a possibility.”

In a recent interview, producer Kate Brooks opened up about the upcoming scenes for Super Soap Week.

She said: “It is very safe to say that there’ll be a lot of repercussions to come from this week.

“What happens during this week will really impact the lives of some of our well-loved characters.

“This is just the start of something that will irrecoverably change our characters’ lives forever,” Kate told The Mirror.