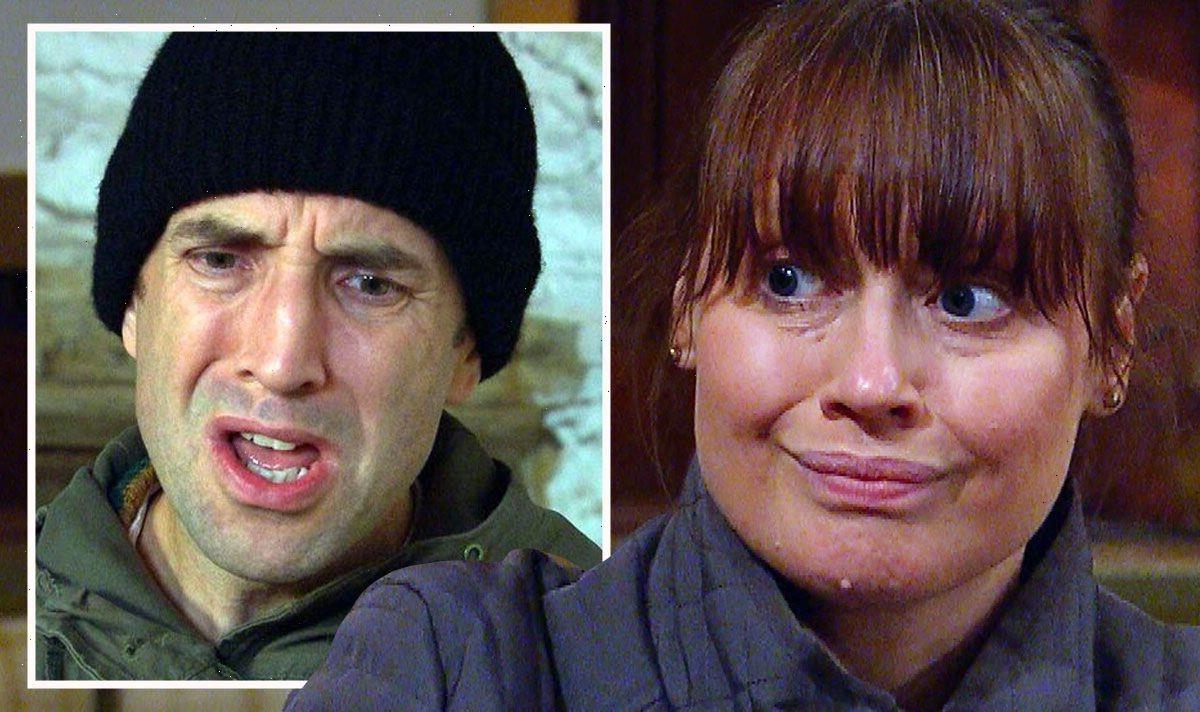 Lydia (played by Karen Blick) is currently unaware her husband Sam (James Hooton) is renovating a caravan for her after discovering she wanted to buy one to travel around the countryside in. Of course, it seems Emmerdale are setting up some comical moments for the hapless pair as Lydia won’t be expecting the surprise she receives. However, the moment of the big reveal could be overshadowed if the ITV soap character discovers she is expecting a baby.

Since she became more of an established character on the show, viewers have learned a lot about Lydia’s tragic backstory.

This has included the villager having fallen pregnant with three children, one of which was stillborn and led her to flee her childhood foster home and change her identity.

The other two children she conceived with her late husband Steve she miscarried, leaving the beloved character heartbroken.

When she thought she had Huntington’s Disease, the villager thought her chances of having any more children were gone for good.

However, it could be although she and Sam weren’t planning on expanding their family, they will have a new arrival later this year.

Lydia would be apprehensive about the pregnancy, having struggled to carry a baby to full-term in the past but she could discover she is quite far along.

With the character becoming more tired recently, hints could have already been dropped the beloved villager is expecting.

After discovering she is almost halfway through her pregnancy, Lydia could have to tell her husband he is going to be a father again.

Unfortunately, he might not take the life-changing news too well as he thought he would never be a father again after having Samson Dingle (Sam Hall).

His wife would be shocked to see his reaction as this could be quite exciting for her given the trauma she has suffered in the past.

Sam and Lydia will also have a big story

However, after the initial shock wears off, Sam could see it in a whole new light as he begins to envision having a little baby around.

Although this would mean their finances would be tight, he knows he could offer the child a brilliant life with him and Lydia as parents.

They would decide to keep the news from their loved ones as Lydia might not want to jinx the pregnancy by the news getting out.

So, will it be a surprise to the rest of the village when the couple striating walking around with a little one in tow?

Producer Laura Shaw hinted at a big storyline for the couple in a recent interview with Express.co.uk and other media.

The soap boss said: “Some of our most-loved couples will have stories that will see how they navigate through their problems as strong family units.

“Sam and Lydia will also have a big story that sees them having to pull together.

“I think the stories running through the summer are very much about strengthening some of our couples and seeing them fight for what they love as well as maybe pushing one or two others to breaking point.”

It could also be the new arrival is born during the time the soap is about to celebrate its 50th anniversary in October.

Executive producer, Jane Hudson, teased some more births in the village this year when speaking with Express.co.uk and other media.

Jane explained: “There will be a new baby arriving in Emmerdale before the end of the year.

“I think that’s not giving anything away as there are so many female characters in the show, but there will be a new arrival before the year is out.

“There’s probably going to be a birth in the anniversary month perhaps! Babies in soaps are either born on programme celebrations or Christmas so there’s going to be one of those happening.”

She also teased the Dingle family were going to be put front and centre of the show this year and this storyline could be another one to confirm this point.

The soap boss added: “There is lots going on for the Dingles as we head into 2022. Two of our most loved Dingles are going to be facing huge life-changing situations that are going to have repercussions for the whole village.”

“The effects of this are going to be long-lasting over the course of 2022 and into 2023,” Jane continued.

“In the next few months, we’ll see drama, joy, fun, laughter, agony, pain, grief and despair hit this family. They will be pulled into a lot of directions and be at the heart of our very biggest stories this year.”

The Dingles have already faced a lot this year, with Marlon Dingle (Mark Charnock) suffering a stroke and Charity Dingle (Emma Atkins) getting her hands back on the Woolpack.

To top it all off, it seems Belle Dingle (Eden Taylor-Draper) could be going into business with the family’s archenemy, Al Chapman (Michael Wildman).