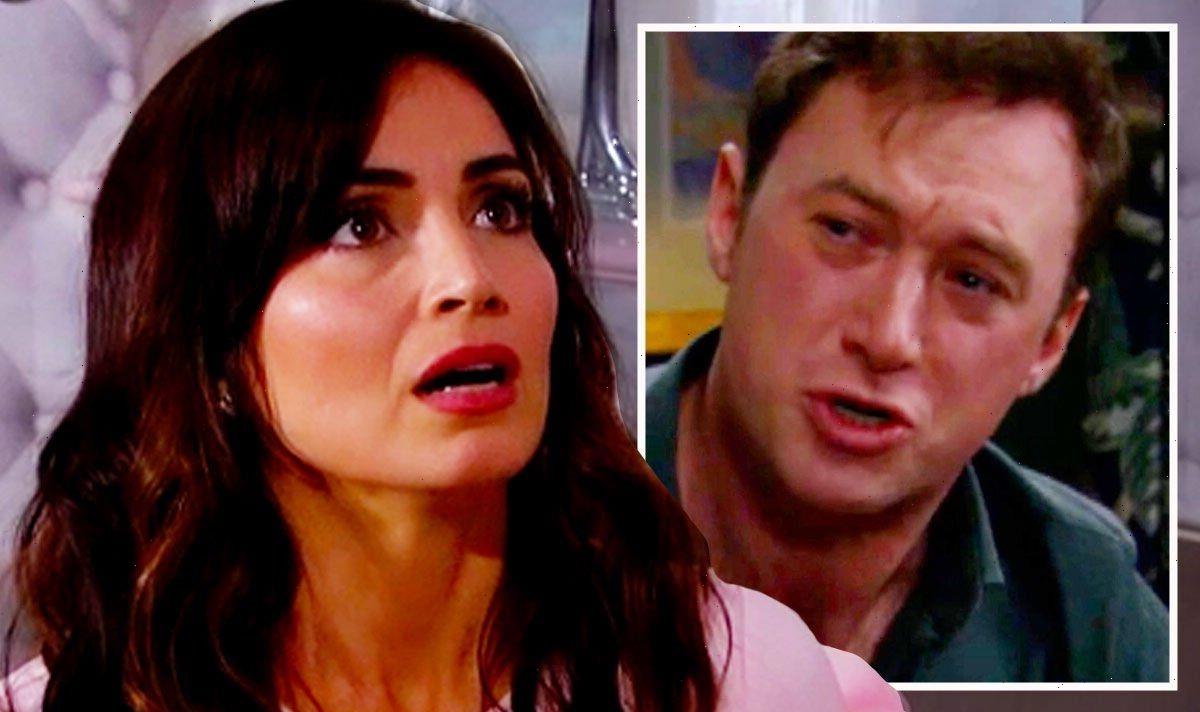 Liam (played by Johnny McPherson) breathed a sigh of relief earlier this week on Emmerdale when he finally received justice for Leanna’s (Mimi Slinger) death as villain Meena Jutla (Paige Sandhu) was sentenced to life in prison. Although this grief will never leave him, he has taken a new approach to life an in upcoming scenes on the ITV soap, he will put more effort into his wife, Leyla Harding (Roxy Shahidi). However, as he does some digging and wants to do something grand to mark their first anniversary, he could discover their marriage was completely invalid.

Ahead of the pair getting married last summer, Liam and Leyla were shocked to see Bernice Blackstock (Samantha Giles), back in the village.

Bernice had previously tried to marry the doctor but she jilted him on their wedding day when she told him she was going to live in Australia.

When she made her dramatic comeback, she was eager to right the wrongs of her past, which included not tying the knot with the handsome villager.

Chaos ensued as she donned a wedding dress and horrified Leyla when she claimed she was going to be the one who was going to marry Liam.

Eventually, she saw what she was doing was wrong and stood to the side as her former lover and his new wife exchanged their vows.

Ever since, she hasn’t really bothered with the couple, apart from when Leanna first died and she wanted to support them both the best she could.

This seemed to suggest she was finally over the doctor and this was particularly evident when she developed a bond with Will Taylor (Dean Andrews).

However, going back to Liam and Leyla’s wedding day, Bernice could have cooked up a dastardly plan to ensure legally, they never actually married.

When the wedding officials were not looking, she could have swapped out the documentation and replaced it with fake replicas.

Of course, with so much having happened since they tied the knot, the couple would have had little time to look at their marriage certificate.

Massive storyline for Liam and Leyla

As their first wedding anniversary approaches this summer, Liam could decide he wants to get their marriage certificate framed.

Finding it amongst some other keepsakes they decide to hold on to from their wedding day, he could be shocked to discover the documentation is fake.

Contacting the team who officiated the wedding, he could learn the marriage is invalid and would need to be performed again to make it legal.

After losing Leanna and a baby with Leyla, the doctor who be at his wit’s end over the amount of bad luck which keeps falling at his door.

Wanting to find out how such a mistake could have been made, the beloved villager could confide in Bernice about his discovery.

Having forgotten all about what she did, Bernice could be horrified her scheme has been rumbled after so much time has passed.

Could she try and convince the grief-stricken father it could have been villain Meena who swapped out the real documentation for the fake replicas?

With Meena having taken such a fascination with the Cavanaghs during her reign of terror, she could have wanted to destroy Liam and Leyla before going on to kill Leanna.

But will she do a good enough job to throw her former lover off the scent it was actually her who has caused this fresh tragedy?

Speaking with Express.co.uk and other media earlier this year, producer for the show, Kate Brooks, hinted a twist like this was on the horizon for Liam and Leyla.

Discussing the aftermath of Meena’s exit from the show, the soap boss explained: “I think we were very conscious not to just tie it up in a very neat bow and say okay, now Meena has left and gone from the village, let’s just move on.

“That is not what would happen or how we have made it.

“There’s a massive story on the table for Liam and Leyla which is the result of what has gone down with Leanna and everything.”

Not officially confirming what the storyline twist was, could Kate have been hinting at how Liam and Leyla will discover their bad luck started even before Leanna died?

With everything from the past 12 months weighing heavy on their shoulders, they might not want to get married again as they realise they are two very different people.

Leyla, in particular, has been very distracted in recent weeks, meaning she wasn’t in court when Meena’s sentence was passed.

It has been hinted this has something to do with newcomer to the village, Suzy (Martelle Edinborough), but the fact she’s been keeping secrets from her other half might not be a good sign.

Could Liam end up wifeless and childless, forcing him to think carefully about whether he stays in the village or not?